Can a plant-based diet reverse atherosclerosis?

June 18, 2022
When starting my PhD project (in 2018) I had the idea to attempt to test if switching to a plant-based diet can "reverse atherosclerosis". While this may sound pretty straightforward (to some), this isn't that easy. But now, five years later, the results have finally been published (PubMed)- and I would say the results are quite good.

If you don't want to read the background scroll straight down to "What our study tested and showed".

In the 1980s and 1990s, a US-American medical doctor and scientist called Dean Ornish (now a celebrity author) conducted a number of studies, the most famous of which being the "Lifestyle Heart Trial". This trial is widely cited in the vegetarian and vegan literature as proof that a plant-based diet (or some say "vegan diet") can reverse atherosclerosis.

What did they do in this trial?

The dietary recommendations were ...
It should be noted that there is a difference between "dietary recommendation" and what people actually ate. That is, it is unlikely that all (or even most) participants completely stick to the dietary advice given - and this is also what the Ornish study showed: the participants only followed the advice to some extent (some more some less), i.e. these individuals were not 100% vegan or probably even vegetarian.
It should also be noted - as the study's name, "Lifestyle Heart Trial", indicates - that the participants did not just receive dietary advice but also other lifestyle advice, namely to engage in aerobic exercise, stress management, group psychosocial support, and to stop smoking (if they did).

Who were the participants?

This is a very important question because it is much easier to show health improvement in people with "disease" than to show health improvements in generally healthy people.
The participants of the "Lifestyle Heart Trial" all were "patients with moderate to severe coronary heart disease". That means the lifelong process of atherosclerosis was already very far advanced in these individuals.

But what (which parameter) did the Lifestyle Heart Trail measure?

They measured "coronary artery percent diameter stenosis" (that means, how blocked a particular artery that lies on top of the heart was).

And which method did they use to measure this?

They used "quantitative coronary arteriography", also known as a coronary angiogram. This is a very invasive method, like an operation in a way, in which dye is injected into the person's blood, a tube is inserted into the persons arteries from the groin up to the heart, and X-ray images are taken of the heart.

What did Ornish's study show?

What our study tested and showed

Why did our study not just copy what Ornish did?

Needless to say, you cannot just "take" a random group of people (or heart disease patients), "force" them to follow your recommendations (and Dean Ornish's study lasted for five years - which is a long time for this type of study), and then "force" them to submit to some invasive procedure which can be dangerous.
In addition, ideally chronic disease prevention should start as early as possible in life. So, it's better to start in healthy people than people who already have advanced disease. This also makes the target group - and the potential preventative impact - MUCH bigger. Also, the funding for our study was precisely for health improvement in the general population - so our participants were mostly clinically healthy participants from the general population (mostly middle-aged and elderly).
The invasive method used by Ornish is very expensive and can be dangerous - because of this its use is only justified in people with advanced disease. Consequently, we had to use a different method to "measure atherosclerosis" ... AND this method needed to be suitable to be able to change a "before and after change" AND it needed to be practically doable. One cannot just choose any method, whatever the cost and difficulty and time duration, and use that method. You need to be realistic:

Which parameter did our study assess?

Without going into minor (massive) details, we tested "atherosclerosis" by measuring the artery wall thickness of the carotid arteries (on both sides of the neck) - this is called: common carotid intima-media thickness. And this was done with ultrasound. The thicker the wall the worse, i.e. the more advanced the unfavourable changes of the artery wall, i.e. the higher the risk of a heart attack or stroke.

What did we recommend?

You can most easily see that in the Supplementary material of the article (scroll down to pages 5 and 6).
We recommended to ...
However, there was a strong focus on dietary change, and our data also indicate that this was the area in which the participants made the biggest changes.

What did our study show?

Our study showed that, with all participants included, the artery wall thickness increase more slowly in the intervention group (i.e. slowing down the increase in risk) compared to control - but this result was less clear than in our subgroup analysis.
In the subgroup we included only those people who already had relatively high values of the artery thickness at the start of the study. In this subgroup, the results seemed very clear: the artery wall thickness DECREASED in the intervention group (this could be called a "reversal of atherosclerosis" or, maybe more exact, a "reversal of artery wall damage") and INCREASED in the control group. And all (many) statistical adjustments (which were made to double and triple check this) confirmed this result.
It should be noted that in science, the result of only one study doesn't mean too much. This result (from a science perspective) should be replicated in other studies, ideally conducted by other researchers.
This graphic shows the results best ... the lower the curve, the better ... the blue curves are the intervention group, and the orange curves are the control group: 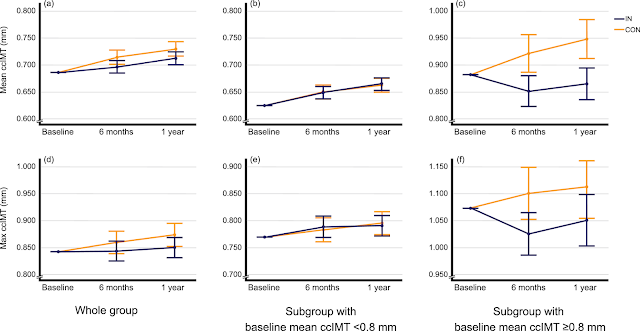 Moral of the story

So ... can a plant-based diet reverse atherosclerosis? Well, yes probably ... but ... 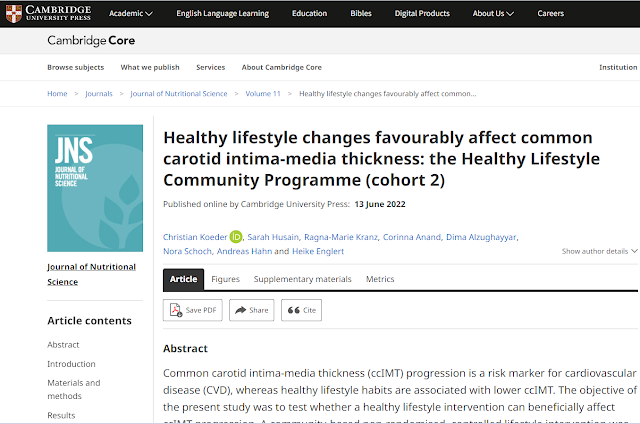 If you want to help this article reach more people, please share it on social media or on your own blog ... or even better, in a news article.
Update 18 June 2022:
I should add that there have been some several other studies that have shown "atherosclerosis reversal" in the form of decreasing common carotid intima-media thickness (see the Discussion section of our article). The CORDIOPREV study from Spain has also shown a decrease in carotid plaque height - the participants of this study were coronary heart disease patients, while in contrast our participants were people from the general population who were generally clinically healthy (which makes it more difficult to show an effect).