Are vegan children in India really at risk for stunting?


A new article by scientists from the International Food Policy Research Institute (IFPRI) in Washington, DC, USA, published in the Journal of Nutrition, has pointed out that vegan babies and young children in India are at an increased risk for stunting – which means being too small for their age. However, it seems likely that many of the “vegan” mothers and children in this study were extremely poor people were not vegans by choice, but who did not eat animal products (or hardly any) because they were so poor.

First, the article includes this lovely map which shows what percentage of women (mothers in this case) are lacto-vegetarians in India. 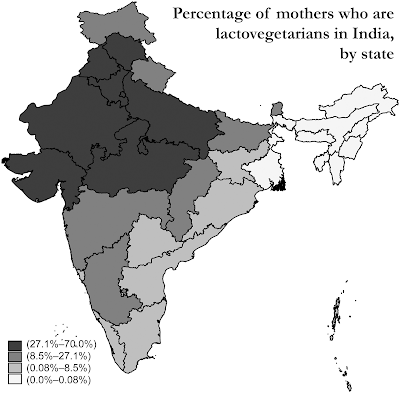 The article also states that “Most existing estimates suggest that just under one-third of the majority Hindu population is lactovegetarian (mostly upper castes), with smaller subsets of the population being lactoovovegetarian, lactopescatarian, or vegan.”

The actual percentage of real vegans in India, i.e. vegans who are vegans by choice, not out of poverty is not really known currently, as far as I know.

Two things are important to mention about this result: (1) As already mentioned, very likely these “vegans” were not actually vegans, but extremely poor people, and (2) this higher risk was present only in the “vegan” children aged 6–23 months, but not anymore in a statistically significant way at the age of 24–59 months (= 2–5 years old; see table 3 below).
This second point is actually quite surprising to me. Imagine extremely poor people who cannot afford any animal products, and probably not many fruits and vegetables or even legumes. One would assume that many more of these children would end up with terrible deficiencies, including severe vitamin B12 deficiency.

“Vegans” in this study were defined in this way: “Vegan mothers are defined as those who report never consuming dairy, eggs, meat, or fish.”

Now, I am assuming (!) that most of these “vegans” were not real vegans. I cannot say so for sure, but I have very good reasons to assume this:
(1) From what I know a vegan diet because of tradition and/or religion is very uncommon in India.
(2) There are no ancient religious or cultural groups in India who are traditionally vegan – as far as I know.
(3) Vegan diets and veganism are really gaining in popularity in India (like elsewhere) but more among more educated, wealthier, more English-speaking people – as far as I know. Veganism in the mainstream – even if vegans were just 1% of the population – is a new phenomenon in India. Likely actual vegans make up much less than 1% of the population in India, and most vegans in India are “new” vegans.
(4) From the information in table 1 (see below) it seems that a “vegan” diet was more common among the poorest and among lower caste mothers – and I would suspect that these “vegans” were vegan mostly due to poverty.
(5) Because the “vegan” children were only more likely to be stunted at age 6–23 months and not anymore at the age of 24–59 months, this makes it seem like the children recovered quickly, and actually just grew more slowly than the other dietary groups. This confirms my suspicion that these children were actually neither real vegans, nor were they even 100% dietary vegans due to poverty, because I would expect extreme deficiencies in very poor children who did not have enough food, not enough food variety, and no B12 supplements.

This study included more than 220,000 children, and about 1% of these children were “vegan” children, so about 2200 children. It is very likely that there aren’t that many vegan children in this age group in India. Please do correct me if I’m wrong.

“Children of vegan mothers were significantly more likely to be stunted [too small], wasted [too skinny], or anemic [likely due to deficiency in iron and/or vitamin B12] than nonvegetarian children, and the differences were relatively large (8.8 percentage points in the case of stunting).”

“In contrast, children of vegan mothers were 5.2 points more likely to be stunted in the 6–23 [months] age group, whereas the associations for the other age ranges were not statistically significant.

“Relative to nonvegetarian mothers, there were no significant differences [in terms of wasting, i.e. being too skinny] for the smaller groups of children of lactopescatarian mothers or children of vegan mothers.”

“We found some evidence that children of vegan mothers are more likely to experience diarrhea […].”

The article concludes with possible explanations why the “vegan” children were at a higher risk of stunting: Well, obviously because they did not consume dairy.

“In contrast, children of vegan mothers, who constitute just 1.1% of sampled Indian mothers, are at a substantially increased risk of stunting in the 6–23 mo age range.
We explored several hypotheses that might explain these results.
First, we found that lactovegetarian mothers and their children are significantly more likely to consume dairy products frequently and potentially in larger quantities, and that more frequent dairy consumption by mothers predicted a significantly lower risk of stunting and wasting in their children.”

Well, unsurprisingly, the lacto-vegetarian children consumed MORE dairy than the allegedly “vegan” children.
And … dairy in fact is a rich source of vitamin B12, protein, and calcium, and zinc, and calories, and other nutrients that are less relevant here. Quite possibly, dairy is also a relevant source of iodine – in “Western” countries dairy contains high amounts of iodine because dairy cows are given iodine-fortified fodder and because iodine-containing disinfectants are used to clean their udders and the milking machines.

This last point is a very important take home message for real vegans in India:

The article also – wrongly – points out that “Traditional Indian diets dominated by rice and pulses will have inadequate lysine content […].” Pulses (= legumes), i.e. beans, lentils, peas, chickpeas, soya, mung dhal, etc. are excellent sources of the amino acid lysine. Make sure to include both grains (like rice, wheat, etc.) and legumes in your vegan diet.

Take home message: Researchers should differentiate between real vegans who are vegans by choice, and people who are very poor and cannot afford to buy any animal products who are not actual vegans.

Search for “India” on this blog.

See my vitamin B12 recommendations for vegans – 5 to 10 µg per day for vegan children is fine – here:
In English
In Hindi
In Gujarati
In Kannada
… and many other languages

Find more excellent India-specific vegan nutrition info on the Vegan Outreach India website. Jack Norris, Vegan Outreach’s president, is a registered dietitian (RD) and a long-term pioneer of vegan nutrition education.
Also have a look at the Satvik Vegan Society’s website vgan.in, and at SHARAN India’s website.
(Obviously, I'm not responsible for content on other websites.)

Also, if you’re interested: How should vegan children grow? 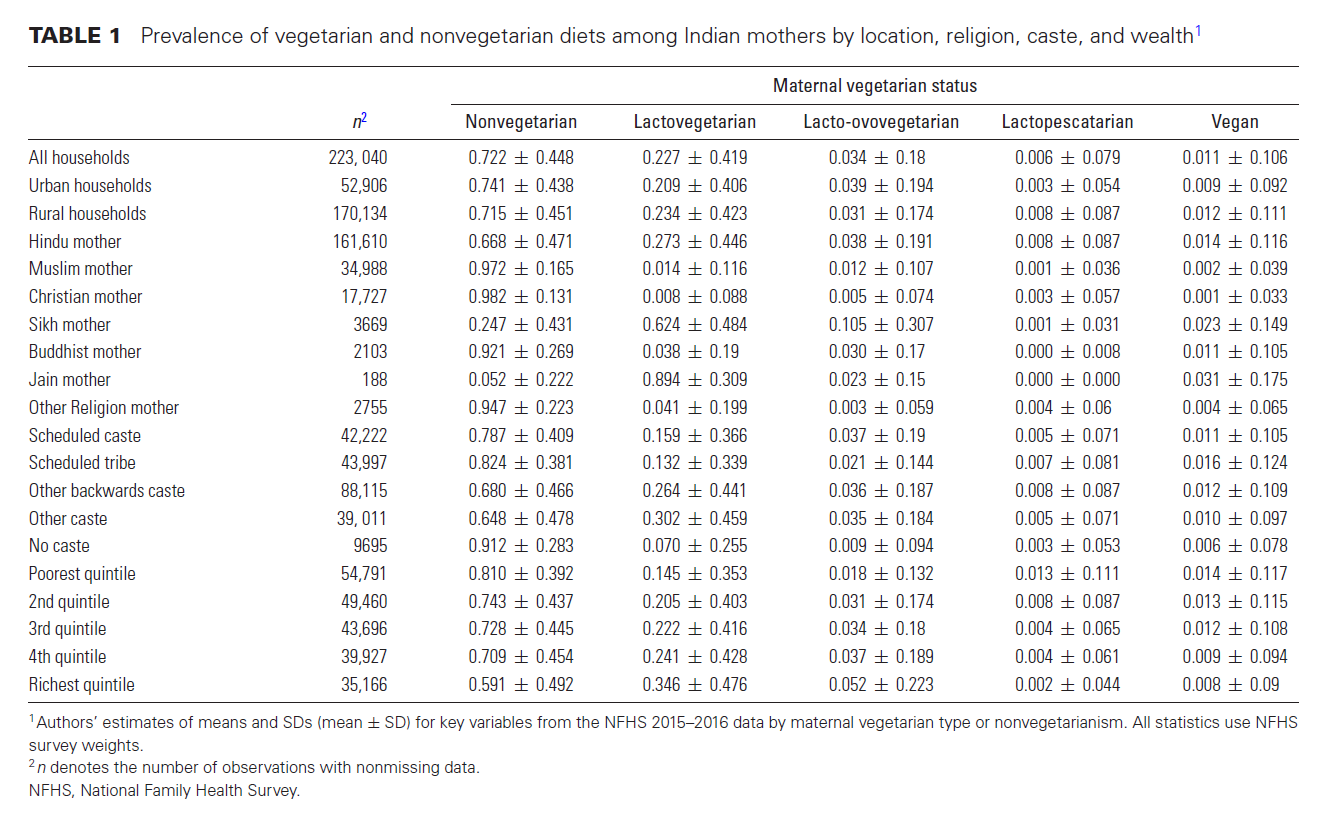 Reference:
Headey and Palloni: Stunting and Wasting Among Indian Preschoolers have Moderate but Significant Associations with the Vegetarian Status of their Mothers; Journal of Nutrition 2020 Mar 14. pii: nxaa042. doi: 10.1093/jn/nxaa042 . [Epub ahead of print] https://www.ncbi.nlm.nih.gov/pubmed/32171005