July 23, 2022
A case of extremely severe vitamin B12 deficiency in a young vegetarian woman (maybe vegan or near-vegan) in Qatar has just been reported by Elhiday et al. The authors of this case report are affiliated with institutions in Doha, the capital of Qatar. So probably, this case occurred in or somewhere near Doha (I'm guessing).
The woman (the "case" of the case report) was ...

Her symptoms were ...
Her blood pressure was at a very healthy level. Her kidneys were also found to be functioning well. They also did a large number of other tests and did not find any other diseases.
Interestingly, her mean corpuscular volume (MCV, the volume of the red blood cells) was 99.6 fL (i.e., normal). Often it is increased in B12 deficiency because, due to B12 deficiency, the red blood cells cannot divide.

Trying to find the cause of the problem ...

The doctors even did a "chest radiograph" (X-ray; which exposes the person to a relatively low dose of radiation, about 0.1 mSv) and also a CT scan (computed tomography) of the abdomen (which exposes the person to a relatively large dose of radiation, about 8 mSv, i.e., about 80 times as much as a chest X-ray). In any case, this CT scan showed that her liver and especially her spleen were enlarged.
In addition, the doctors did a bone marrow aspiration, a bone marrow biopsy, an endoscopy (putting a tiny camera into the mouth down to the stomach and small intestine), a small intestine biopsy, a colonoscopy (putting the camera in from the anus to the lower, i.e., large intestine) and a colon (large intestine) biopsy – poor woman!

The patient received a blood transfusion and B12 supplements. It is not stated whether the B12 was injected or given as tablets. "After one week of therapy, the patient's symptoms improved significantly, she felt more energetic with a better appetite" and her blood levels improved. After two weeks of vitamin B12 supplementation (injections?) of 1000 µg/day, her symptoms and blood values dramatically improved.

I find it praiseworthy that they write: "Vitamin B12 is perceived as an important vitamin for haematological, cardiovascular, and neuropsychological performance." In other words, you don't want anemia, you don't want a stroke or heart attack (or other cardiovascular problems), and you don't want nerve damage. Therefore: ensure an adequate intake of B12.
If you want to read a brief description of the physiological mechanism of how B12 deficiency can cause an enlargement of the spleen, check the full text of the article (which is open access), but it's a bit technical.

Conclusion by the authors: "This serves as a reminder for physicians that when encountering massive splenomegaly, hemolysis, and pancytopenia, vitamin B12 deficiency should be considered as a cause. It also highlights that treatment with vitamin B12 supplementation can reverse these findings (symptoms)."
Conclusion for vegans: It may be a good idea to continue providing information to all vegans and potential vegans about the need to supplement vitamin B12 on a vegan or near-vegan diet. And this is also true (a good idea) for many not so near-vegan, ovo-lacto-vegetarian diets. In contrast, the current strategy of some vegan organizations to keep vitamin B12 a bit of a secret because it "makes veganism look bad" can be viewed as dangerous. 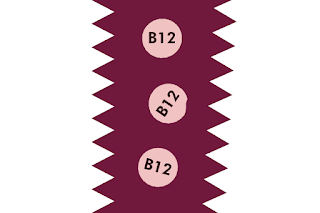