So, to make it quick: I've skated two pairs of Etnies Marana tan gum (vegan) - the ones with the Michelin sole. The soles are super durable and quite grippy. Some people have told me that they haven't bought the Etnies Marana because they find it a bit too "fat" (bulky). I don't find it all the bulky actually. It's less bulky looking than your average run-of-the-mill dunk-type shoe (trying to insult Nike).

The soles (I thought) are TOO grippy -- However, with the second pair I didn't think this was the case at all. Maybe I had gotten used to this shoe, or maybe it was all in my head. Also, the soles are certainly not too stiff. Flexibility is great. The soles are not TOO thick. They're great. AND they are amazingly durable. And (I think) they look great too (the "natural" rubber look). And they're all one thing (cupsole). They don't have a side thing around the soles where bits and pieces break off. So overall, these soles are awesome.

I thought they were a little stiff at the sides. Ironically, the sides are canvas, but really thick, stiff canvas. But, really, this isn't actually a problem.

I thought - strangely - that these shoes feel too tight. I have very wide feet - BUT these aren't skinny shoes exactly. So, how is it that they could feel "tight"? At first, I really thought: "You must be imagining this. This is all in your head." But - even though I wouldn't really consider this a real problem of considerable drawback of these shoes - they ACTUALLY MAY feel tight to you if you have wide feet. The reason lies in the following problem.

I thought - and this is actually really an "issue" with these shoes - that my heels were slipping out, as if the shoes were too big. But they weren't too big at all. Someone else has also told me that they felt that their heels were slipping out with these shoes. Now, the reason behind these last two problems (feels too tight, heels slipping out) is - I think - that this shoe has a thick, spongey insole, which is great for protecting your feet, but ... I'm guessing (and this is pure speculation) that this shoe was originally designed without thick insoles, which would mean that with thinner insoles your foot is lower down and overall there is more space inside the shoe - which ... SOLVES these two problems. The foot is lower down and the heels WON'T slip out. The foot is lower down and the shoes WON'T feel tight (I mean, too tight, in a bad way, not like Kelly Hart uses the word "tight"). Anyway, I do not know why I skated the first pair of these shoes cursing a lot but not taking out the thick insoles. Well, with the second pair I did (see pictures). I took the Etnies STI foam insoles out and put some old (paper thin) Servant insoles in. This SOLVED the problem. Problem is, the soles of your feet will not be protected by a nice foamy STI foam insole but will instead, well, suffer the joy of heel bruise, landing primo with no protection etc. But still, I prefer this 100% over the other (heels slipping out option).

For the upper/rubber cap, I used Ripcare (kind of like Shoe Goo) almost daily, which is something that works really well for me. So, I skate the shoes until the soles are worn through. Even when the soles have reached this point, and the rubber of the sole has worn though, the layer below the rubber is quite tough, and the soles still have (if you're like me) one or two sessions of life in them. By now, the second pair has been completely destroyed (see pictures). I've now switched to a pair of éS "Accel Plus Ever Stitch navy red white (hyperbeauty)". And to be honest, I wish I had my "Marana" back (I still have one pair on my shelf). This éS Accel Plus shoe is actually wider (roomier) than the Etnies Marana, and - taking into account that my deck right now is really shitty with really old griptape - I feel like the soles aren't grippy enough and my flick is completely off. So, just saying, the Etnies Marana tan gum is a pretty good shoe. They're vegan - one of the not so many respectable vegan skate shoes right now - and it's also available in a newer vegan colourway: the Etnies "Marana Michelin black charcoal". 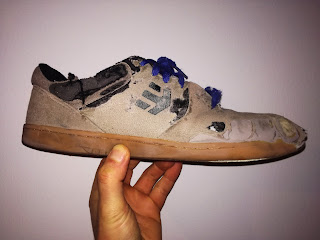 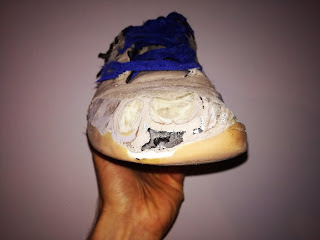 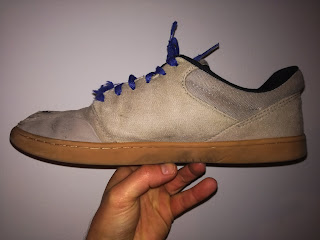 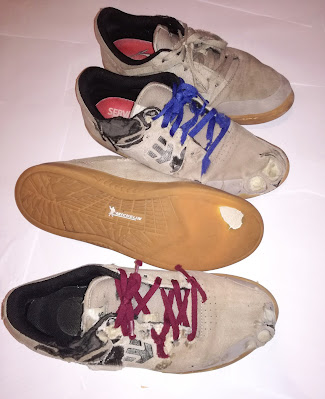 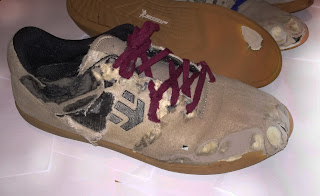 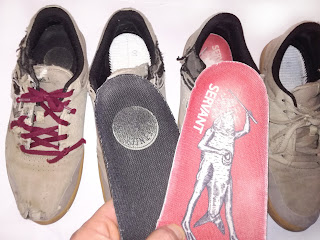 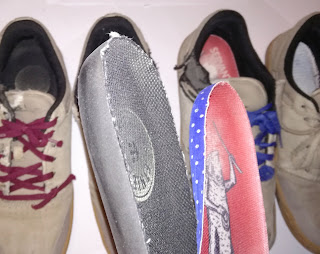 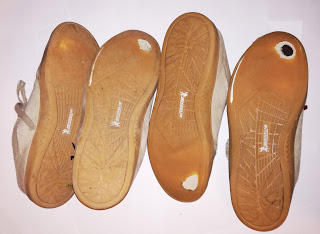