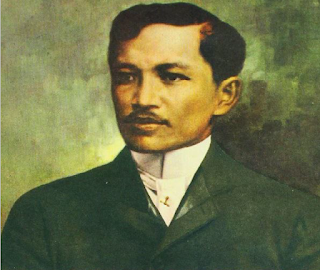 I'm not sure if this is a well-known fact, but as I'm reading José Rizal's "Noli me tangere", I was quite surprised to come across a mention of vegetarianism ... and I mean the actual word "vegetarian". I'm reading the book in the Spanish original - most of Rizal's works were written in Spanish and only a few in Tagalog.
There is a scene in which there is a group of people at a lake and one guy jumps into a water to catch and kill a crocodile. The crocodile is caught and dragged on shore, but then the crocodile manages to escape and drags the guy far away and down into the water. Everyone thinks the man has no chance to survive. But then another man (named Ibarra) jumps into the water ... and shortly after, both men return alive with the crocodile's belly slashed wide open.

Then José Rizal goes on to write: "The body of the cayman writhed about, sometimes showing its torn white belly and again its speckled greenish back, while man, Nature’s favorite, went on his way undisturbed by what the Brahmins and vegetarians would call so many cases of fratricide."
That is, José Rizal doesn't express his own opinion. But he does (empathically, it seems to me) describe - or goes out of his way to describe (one could say) - the view of "Brahmins and vegetarians" who consider animals "brothers" (fratricide - the murder of one's brother, literally) and who would, Rizal imagines, consider the killing of the crocodile not just murder but fratricide. Quite impressive.
The English word "vegetarian" seems to have been coined in England in the very early 1840s. But José Rizal used the Spanish word "vegetariano" which must be at least a little bit "younger". Unfortunately, I am currently still in the dark about when the word "vegetariano" was first used in Spanish ... I will find out! I'll try. ... Rizal seems to have finished the book "Noli me tangere" in 1887.
Also, side note: The English text is referring to a "cayman". But the modern use of the English word "caiman/cayman" seems to refer to a type (genus Caiman) of crocodiles that do not exist in the Philippines. The two species of crocodile that exist in the Philippines - the saltwater crocodile and the Philippine crocodile - belong (at least today) to the genus Crocodylus.
The word "cayman" in the English text is a correct translation as José Rizal used the Spanish word "caimán". Actual cayman crocodiles only live in South and Central America.
However, more importantly, here is a snippet from the original text English (and in Spanish below):

"Now the struggle seemed to be at an end and the head of the youth appeared, to be greeted with joyful cries. The eyes of the old women filled with tears. The pilot climbed up with one end of the rope in his hand and once on the platform began to pull on it. The monster soon appeared above the water with the rope tied in a double band around its neck and underneath its front legs. It was a large one, as Leon had said, speckled, and on its back grew the green moss which is to the caymans what gray hairs are to men. Roaring like a bull and beating its tail against or catching hold of the sides of the corral, it opened its huge jaws and showed its long, sharp teeth. The pilot was hoisting it alone, for no one had thought to assist him.
Once out of the water and resting on the platform, he placed his foot upon it and with his strong hands forced its huge jaws together and tried to tie its snout with stout knots. With a last effort the reptile arched its body, struck the floor with its powerful tail, and jerking free, hurled itself with one leap into
the water outside the corral, dragging its captor along with it. A cry of horror broke from the lips of all. But like a flash of lightning another body shot into the water so quickly that there was hardly time to realize that it was Ibarra.
Maria Clara did not swoon only for the reason that the Filipino women do not yet know how to do so.
The anxious watchers saw the water become colored and dyed with blood. The young fisherman jumped down with his bolo in his hand and was followed by his father, but they had scarcely disappeared when Crisostomo and the pilot reappeared clinging to the dead body of the reptile, which had the whole length of its white belly slit open and the knife still sticking in its throat.
To describe the joy were impossible, as a dozen arms reached out to drag the young men from the water. The old women were beside themselves between laughter and prayers. Andeng forgot that her sinigang had boiled over three times, spilling the soup and putting out the fire. The only one who could say nothing was Maria Clara.
Ibarra was uninjured, while the pilot had only a slight scratch on his arm. “I owe my life to you,” said the latter to Ibarra, who was wrapping himself up in blankets and cloths. The pilot’s voice seemed to have a note of sadness in it.
“You are too daring,” answered Ibarra. “Don’t tempt fate again.”
“If you had not come up again—” murmured the still pale and trembling Maria Clara.
“If I had not come up and you had followed me,” replied Ibarra, completing the thought in his own way, “in the bottom of the lake, I should still have been with my family!” He had not forgotten that there lay the bones of his father.
The old women did not want to visit the other corral but wished to return, saying that the day had begun inauspiciously and that many more accidents might occur. “All because we didn’t hear mass,” sighed one.
“But what accident has befallen us, ladies?” asked Ibarra. “The cayman seems to have been the only unlucky one.”
“All of which proves,” concluded the ex-student of theology, “that in all its sinful life this unfortunate reptile has never attended mass—at least, I’ve never seen him among the many other caymans that frequent the church.”
So the boats were turned in the direction of the other corral and Andeng had to get her sinigang ready again. The day was now well advanced, with a fresh breeze blowing. The waves curled up behind the body of the cayman, raising “mountains of foam whereon the smooth, rich sunlight glitters,” as the
poet says. The music again resounded; Iday played on the harp, while the men handled the accordions and guitars with greater or less skill. The prizewinner was Albino, who actually scratched the instruments, getting out of tune and losing the time every moment or else forgetting it and changing to
another tune entirely different.
The second corral was visited with some misgivings, as many expected to find there the mate of the dead cayman, but nature is ever a jester, and the nets came up full at each haul. Aunt Isabel superintended the sorting of the fish and ordered that some be left in the trap for decoys. “It’s not lucky to empty the corral completely,” she concluded.
Then they made their way toward the shore near the forest of old trees that belonged to Ibarra. There in the shade by the clear waters of the brook, among the flowers, they ate their breakfast under improvised canopies. The space was filled with music while the smoke from the fires curled up in slender wreaths. The water bubbled cheerfully in the hot dishes as though uttering sounds of consolation, or perchance of sarcasm and irony, to the dead fishes. The body of the cayman writhed about, sometimes showing its
torn white belly and again its speckled greenish back, while man, Nature’s favorite, went on his way undisturbed by what the Brahmins and vegetarians would call so many cases of fratricide." 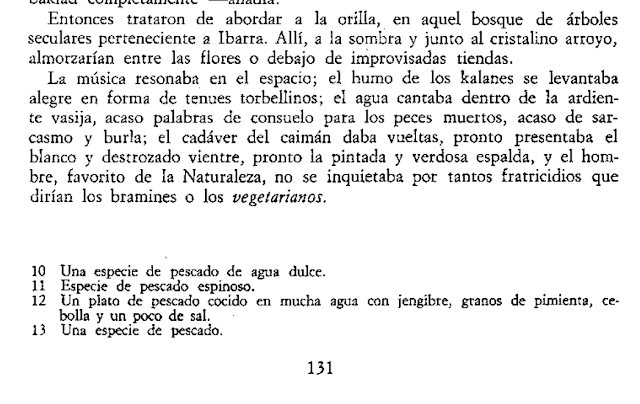 His other novel, "El filibusterismo" does not contain the word "vegetarian". I have not checked his other writings.