CORRECTION: the "Etnies Windrow grey white gum" is to NOT vegan 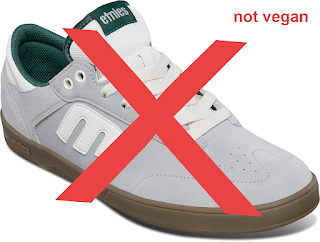 Currently (8 March 2022), both the European and US-American Etnies websites state that the "Windrow grey white gum" is vegan. So, if you search vegan, you will find this shoe. However, it's not listed in the "vegan collection" section - so, if you click on that, you will not find this shoe.

The "etnies SP22" catalogue lists this shoe as non-vegan ... or rather it doesn't list it as vegan and the catalogue lists the material as "suede, synthetic, action leather". The website lists the material as "Synthetic/Suede/Action Leather". That is, both say the same. I have just seen this kind of material info before many times for VEGAN shoes - so I just assumed the "vegan" was correct and that this colourway is synthetic ONLY.

So, unless Etnies confirms otherwise I would assume that the "Windrow grey white gum" is made with real animal-source suede.

From the "etnies SP22" catalog:

Take a bit of Adidas (check the sole), a bit of low-cut (I think that's what the original shoe in the 1990s was called, ~1993), take the low-cut's Adidas-esque Etnies logo, add some awesome (I'm assuming, this is the same vegan suede they use for the vegan Joslin and the vegan Marana colourways) no-kill suede ... and voila. See above -->