Please let your vegan friends - and everyone else - know that babies should be breastfed or receive commercially available formula. Breastmilk is best. Formula is not ideal, but commercially available formula is fortified with all kinds of nutrients and can safely replace breast milk. Again: breastfeeding would be a much better option. But this isn't a perfect world, and sometimes breastfeeding may not be possible.
Also: the breastfeeding woman must ensure that she herself is getting all the nutrients she needs to produce adequate breast milk.
If you like, check out my booklet about vegan baby nutrition: free PDF on the IVU (International Vegetarian Union) website and also available worldwide as a Kindle e-book or a printed book (Amazon). This includes info on foods and supplements for vegan breastfeeding women. 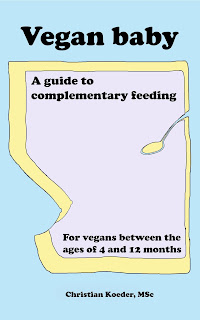 Very importantly, formula should not be homemade. Homemade formula does not supply enough nutrients.
A "case series" of three babies in the United States (from 2020 and 2021) was reported today by the CDC (Centers for Disease Control and Prevention). "Each of these infants had been fed a homemade formula, reported by their parents as the alkaline diet."

The first baby seems to not have been the baby of vegan parents (at least there is no mention of this), but the 4-month old baby boy "had been fed a homemade formula of sea moss (an intended iodine source), hemp seeds, and coconut water for approximately 1 month." I assume this means from about 3 months old to 4 months old (January 2021).
This resulted in the boy becoming semi-unconscious. He couldn't breathe properly, and his heart was racing. Luckily, after being taken to the hospital, "the infant was successfully resuscitated". There wasn't enough oxygen in his blood (and getting to his brain) and he had rickets, i.e. severe vitamin D deficiency ("soft bones").

Similarly, a 3-month old baby boy - again, no mention of whether his parents were vegans, so I would assume they were not - received "homemade formula made of coconut water, hemp seed hearts, dates, sea moss gel, and alkaline water". At age 5 months (January 2021), he was taken to the emergency department of the hospital with too little oxygen in his blood (cyanosis), breathing problems, and stiffening of arms and legs (probably cramping). This boy also had rickets." He received high-dose intravenous calcium and magnesium and was discharged home after being placed on a diet of commercial infant formula."

In this case it is explicitly mentioned that the diet was "vegan" even though the foods the 9-month old baby boy received were very similar to the two cases above: "His parents reported feeding him homemade formula on an alkaline vegan diet consisting of coconut milk, dates, and sea moss, although the sea moss had been discontinued several months earlier."
The baby was taken to a medical doctor/hospital (not clearly stated) "after 5 days of irritability" (August 2020). His body weight was too low, and his body length was too short. His forehead protruded unusually (frontal bossing), and he was unable to sit without assistance. In addition, the baby boy could not control his hand and legs normally. The boy had severe vitamin D deficiency AND severe iodine deficiency. He also had rickets (deformed bones) - the result of severe vitamin D deficiency. The baby boy "was treated with iodine and calcium supplementation and was discharged to a long-term care facility."

Warning by the CDC:

"Parents should be cautioned to avoid this inappropriate substitute for breast milk or commercial infant formula that can cause [...] lasting harm and possibly death."