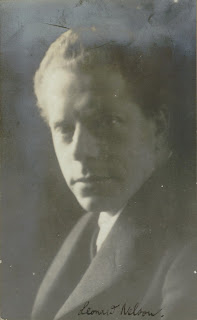 Leonard Nelson (1882-1927) was a mathematician and philosopher at the University of Göttingen (Germany), a socialist*, a vegetarian, and an advocate of animal rights. Having been expelled from the German Social Democratic Party (SPD) in November 1925, Nelson and his allies founded their own political party in 1926: the "International Socialist Fighting League" (Internationaler Sozialistischer Kampfbund, ISK; the current English Wikipedia page translates the ISK's name as "International Socialist Militant League". This (the word "militant"), in all my ignorance, seems quite incorrect. The ISK was in fact an antimilitaristic group, and the word "militant" seems misleading. The German word "Kampf" means "fight", in this case as in "join the fight", or "struggle", in this case as in "a political struggle for social justice". "Bund" can mean union, league, association, coalition, etc., i.e. a group of people who have joined forces for whatever reason.).

The quote presented below is from an essay that was originally published in 1926 in two issues of the magazine of the ISK (Mitteilungsblatt des Internationalen Sozialistischen Kampf-Bundes, volume 1, issues 3 and 5; and it had the subtitle "From a speech in front of the workers of Kassel"; Kassel is a small town in Hesse, Germany.). Nelson had plans to republish this essay, but that never happened. He died in 1927, of pneumonia. Leonard Nelson is buried in the Jewish Cemetery in Melsungen (Hesse, Germany). If anyone has a picture of his grave (if there still is an individual Leonard Nelson grave; his grave was defiled in Nazi Germany, and his mortal remains were slightly relocated), please do share it!

So, the quote is from the essay "Lebensnähe", which can roughly be translated as "being close to life" or maybe slightly better as "being in touch with reality". I haven't decided on a proper translation of the title yet. I don't think "being in touch with reality" is close enough though. What is meant here, I think, is being close to life in the sense that your ideals and actions are relevant to real life, i.e. that they really make a difference for people (and non-human animals) and also in the sense of making demands that are down-to-earth, that can be put into practice, such as vegetarianism.

In the same essay one can find the information (which is widely quoted but probably also present throughout most ISK publications, I assume) that the ISK promoted (and demanded from its members) vegetarianism, abstinence from alcohol, and leaving the church (i.e. cancelling membership).

A worker who wants to fight against exploitation should, however, really not take part in exploitation himself. A worker, too, can take part in exploitation. In fact he can do so in various ways. He can do so as a strike breaker. He can do so by propagandizing in favour of colonial policies. He can also do so by beating his wife and children. Yes, he can do so in a way that is even worse. He can do so by doing what the capitalist does to him to those who are much less able to defend themselves against him than he is able to defend himself against the capitalist - those who are the most defenceless, who will never be able to join forces by forming coalitions in order to gradually conquer their rights in a class struggle. A worker who does not just want to be a “would-be capitalist” and who is serious about the fight against all exploitation does not give in to the contemptible habit of exploiting harmless animals and he does not participate in the daily murder of millions of animals, which in terms of cruelty, brutality and cowardice eclipses all the horrors of the World War.
These are matters, comrades, that elude voting. Either one should make these demands or one should refrain from doing so. Either you want to fight against exploitation or you let it alone. But if as a socialist you laugh at these demands, then you do not know what you are doing. Then you clearly show that you have never seriously considered what the word "socialism" means.

(The essay "Lebensnähe" can also be found in (in German): Leonard Nelson (1972), Gesammelte Schriften IX, Recht und Staat, pages 375/376.)
-----
* Note that I use the word socialist because Leonard Nelson used the word socialism or liberal socialism. However, Nelson himself strongly criticized the concept of "collectivism" (what many might refer to as socialism, i.e. that all means of production are state owned or owned by the workers as a collective). His criticism of collectivism included (in my words) that it disincentivizes people to work effectively and efficiently (it does quite the contrary), that it leads to monstrous bureaucracy (which again makes things very difficult and inefficient but may also lead to injustice), that the lack of competition, again, is a disincentive for innovation, technical progress, and effective and efficient work, and that it facilitates corruption and the very power structures, exploitation, and abuse that it originally wanted to abolish.
-----
Update 24 November 2020
Books by Leonard Nelson in English:
Note: This list may not be a complete list of everything that was ever published of his works in English. But it's all that I could find.
In addition, this was published about the ISK (again, note the in my opinion incorrect use of the word militant; see above, but this seems to be the name the ISK members in England themselves chose to use):
There are a number of other English language publications about and/or by the "Militant Socialist International". But 1935 may have been when this English name ("Militant Socialist International") was first used. (Nelson had died in 1927.)