October 12, 2020
Some recent studies have shown associations between very high vitamin B12 blood levels and an increased risk of an earlier death ("increased mortality"). Because of this, some vegans have been concerned that taking high-dose B12 supplements might not be safe (for example, taking ~2000 mcg per week, which is what many vegans do - and which is, spoiler alert, effective and safe). One speculation was also that large amounts of B12 could somehow "stimulate" or cause cancer.
Luckily, that does not seem to be the case. You can keep taking 2000 mcg of B12 per week if you prefer the weekly option of B12 supplementation (again, you can see my recommendations here).

An new analysis by researchers from the University of Groningen, Netherlands (Wolffenbutel et al. 2020) has shown no association between taking vitamin B12 supplements, including high-dose B12 supplements, and mortality.

Here are the most interesting results:
The authors of the article conclude: "High intake of vitamin B12 in the form of supplements was not associated with any adverse effect on mortality and therefore can be regarded as safe."

The take home message is: even though people with (for example) cancer might have higher than normal B12 levels (somehow as a result of the illness), this does not mean that the B12 itself or B12 supplements would cause cancer or would increase the risk of an early death.

B12 is a water soluble vitamin. Excess vitamin B12 gets "flushed out" of your body by your kidneys - this means with the urine. However, people with kidney disease should make sure to use the methylcobalamin form of B12 instead of the much more common cyanocobalamin (cobalamin = B12).

Why is B12 deficiency bad?

From what is known, B12 is necessary for two enzymes in the body. If there isn't enough B12, these two enzymes cannot work well, and the result are two "bad substances" which damage our arteries and our nerve cells. These two substances are called homocysteine and MMA (methylmalonic acid).

What the analysis by Wolffenbutel et al. also showed is that those people with "good" blood B12 levels, at least 300 pmol/l (407 pg/ml), had the desirably low levels of these two bad substances.
You can see this in the following table: 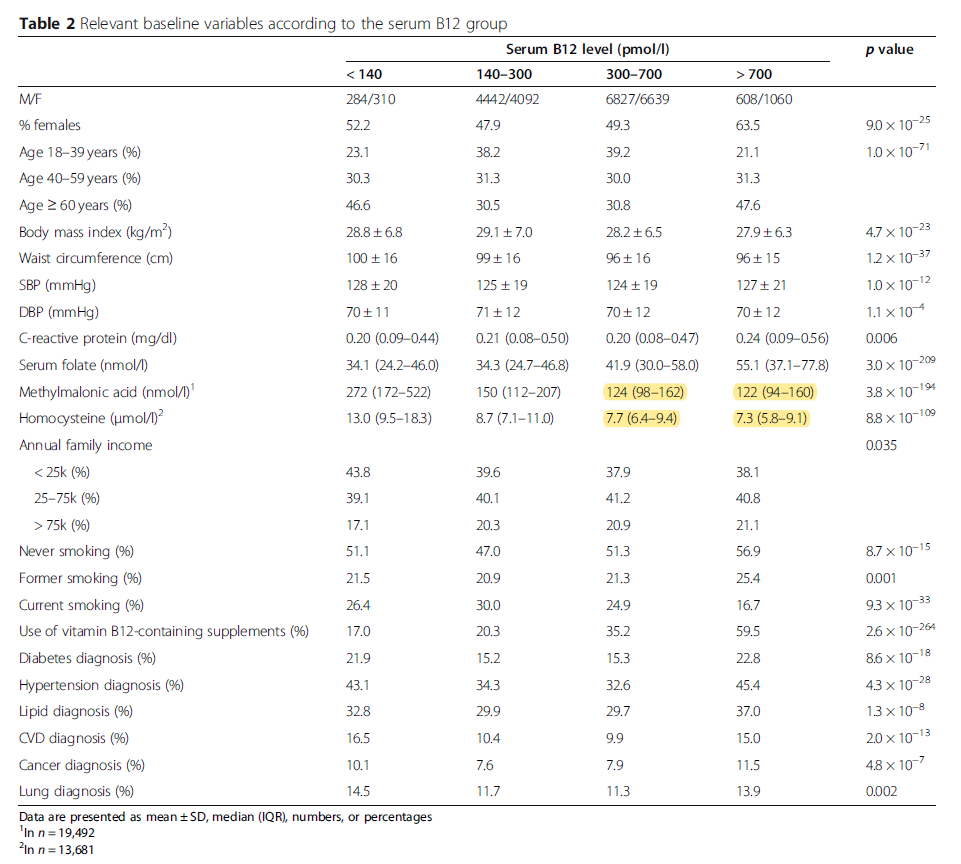 And in this table you can see that of those who took supplements with at least 5 µg (micrograms; mcg) of B12 per day most had such "ideal" B12 levels, i.e. at least 300 pmol/l.

Now, what this can tell us about vegans is uncertain because it is safe to assume that most of the participants in this study were non-vegetarians. But what we can see, at least, is that it is easily possible to increase your blood B12 concentrations by taking B12 supplements and that the more B12 you take the higher the blood levels tend to be.
This study confirms that the recommendations given for vegans by many vegan nutrition scientists - including veganhealth.org, the Vegan Society, ... and also me (same link as above) - are reasonable and safe.

You can also check out the "Vegan For Life Food Guide" by Jack Norris and Ginny Messina for a no-nonsense overview of vegan nutrition recommendations.
Some more quotes from the article by Wolffenbutel et al. ... for you to enjoy:
"[...] none of the adjusted models showed increased mortality in relation to intake of vitamin B12-containing supplements."

"[...] we found no indication that a higher intake of vitamin B12-containing supplements was associated with adverse effects on mortality."
"The association between elevated serum B12 and cardiovascular mortality, together with the absence of any association between high B12 supplement intake and mortality likely indicates “reverse causality.” The increased use of vitamin B12-containing supplements by people with a chronic (cardiovascular) condition supports this conclusion, as well as the growing body of literature that serum B12 concentrations increase in states of inflammation." (This means "illness causes high B12" instead of "high B12 causes illness".)

"High intake of vitamin B12 in the form of supplements was not associated with increased all-cause mortality, supporting its safe use. Vitamin B12 deficiency is prevalent, particularly among
the elderly, and is associated with serious morbidity. The diagnosis of such deficiency is often elusive so that the use of B12 supplements has become widespread, because of its low cost and presumed safety. Recent reports based on associations [not "cause and effect"] have raised the specter [👻] that high B12 levels may be harmful and have discouraged B12 supplement use with potentially harmful consequences. The overall public health impact of our findings is to provide reassurance that high B12 levels per se are not a cause of higher mortality risk."