September 09, 2020
Update 6 May 2021
E-mail by és Europe: "[...] the Vegan pack was only released in the USA [...] for now we have no news yet when there will be new vegan shoes available in also EU. [...]"
Update 4 October 2020
Note that there are now new styles of "Ever Stitch" that contain real animal-source leather, i.e. not all "Ever Stitch" styles are leather-free.
The shoes below are now online on the US-American éS website but not on the UK or Europe websites.
------------------
éS Footwear and the vegan fall (autumn) 2020 collection ... that will maybe come out in autumn 2020.
In times of food shortages, one starts dreaming about food. I imagine. In times of the eternal search for decent vegan skate shoes in the post-Servant era ... some might ponder (the meaning of it all and) the options we (the moral minority) have when it comes to vegan skate or at least leather-free shoes.
You might ponder - with a glass of imaginary wine (my backpack is always too full of food - who wants to carry wine?) and an imaginary record player spinning a Towns Van Zandt record ...
... ponder the days when Tony Hawk rode for airwalk, when there was only Airwalk, Vans, and then that big fat hard-soled Etnies shoe ... the pre-vegan Ed Templeton era ... when Templeton rode for Airwalk one-footing his way to world domination in a pink T-shirt ...
... then there was the 1991 and 1992 era when Zero Two were something that never really made it to Germany (I'm sure they did, but I have never seen a Zero Two shoe in my life.) And the cool Thrasher back cover ad they had was just a window into a distant world.
... then there was the Ed Templeton Emerica skate rat era ... which was sort of polluted by the vegan Rowley Vans shoe ... but that shouldn't affect the name of the era. Similar to Zero Two, but less ugly, Sheep never really appeared on many people's radar in Europe (I think). Sheep was the prelude to this "Ed Templeton Emerica skate rat" era.
Then there was Jamie Thomas, Circa, and the downfall and dissipation of anything resembling an era. This was still a time however before Nike, Adidas, New Balance, Converse, etc. had completely poisoned the well. But they had begun to, pouring in the poison, pouring like Nicky Guerrero (and Sean Sheffey) had been their early pilot studies, meanwhile they were stealing the clean water (like Israeli settlers), pouring in the poison (like that Nazis and their translations of antisemitic hate texts into Arabic).
Then everything was poisoned, but still some of the OG skate companies remain.
One of these is éS.
Now as animal rights vegan skateboarders we (all the half a dozen of us) might wonder: why should we be loyal (at all) to companies that are based on the sale of the skin of slaughtered animals, leather companies, skate shoe companies, owned by meat eaters?
Well, I cannot give you a good reason.
However, éS has several points in their favour:
Anyway, their shoes look trendy and at the same time acceptable to possibly most skaters of all eras, creeds, non-creeds, and colourways.
Disadvantages:
Questions to éS: what are you thinking? How about a proper sturdy (manly) rubber toe cap on a canvas shoe (hemp would be even better, environmentally speaking)? Or is that not trendy enough? Or do you not want your skate shoes to last? I get it: most people buying skate shoes are likely not actual skaters, and many skaters don't skate that much, so their shoes won't be torn to shreds. Still, an indestructible toe cap, how sweet would that be?
Anyway, here's what éS say. It might just be marketing chatter:

"Demand from our global éS family to create more animal friendly products has bean nuts! In fact, our #1 searched item on eSskateboarding.com is the word “Vegan”. With many of our employees, team riders, retailers and éS fans around the world eating plant-based, we thought it was thyme to create this synthetic vegan pack."
Donald Watson who coined the word vegan was right when he said that one advantage of the word was that you could type it into the typewriter quickly.
And here are the leather-free éS shoes that will (hopefully) arrive this autumn (fall):
éS Symbol brown (microfibre) 5101000169
[Check out a review of this shoe by Andrew Cannon.] 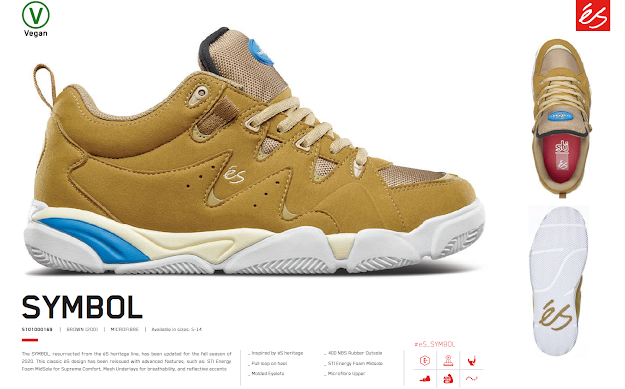 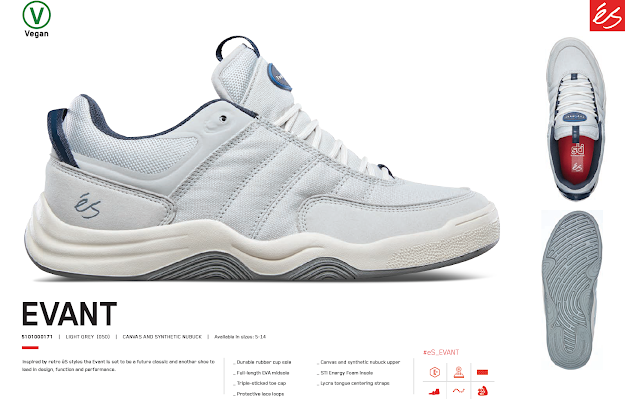 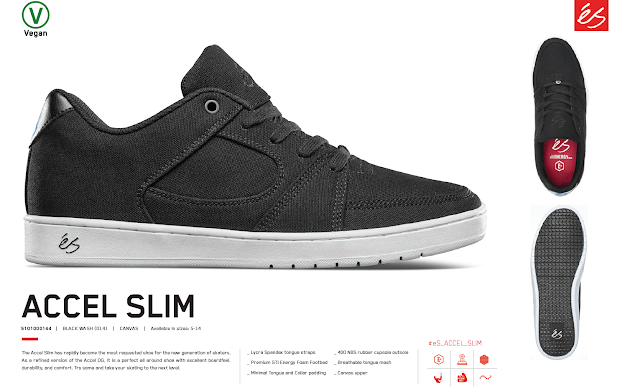