October 01, 2020
It is well known (and correct) that Leo Tolstoy was a vegetarian, and he was also one of the most influential personalities in the early history of vegetarianism in the Russian-speaking world.

I recently read a book (in German) about the early history of vegetarianism in Russia (Peter Brang, "Ein unbekanntes Russland", 2002 - it also seems to exist in Russian: Россия неизвестная : история культуры вегетарианских образов жизни от начала до наших дней). The book contains many bits of interesting information. One of them is that Lenin (Vladimir Ilyich Ulyanov) in 1908 published an article in the newspaper "Proletariy" (September 1908, number 35; the Russian should be "Пролетарий"). This article is titled "Leo Tolstoy as a mirror of the Russian Revolution", and in it Lenin tries to characterize a "typical Tolstoyan" (a follower of Tolstoy's ideas) and those typical Tolstoyan features in Tolstoy himself. Lenin - describing the Tolstoyan in Tolstoy - writes:
"[...] a slovenly, hysterical crybaby, referred to as a Russian boffin [intelectual], who publicly beats their chest and says: 'I am abhorrent, I am disgusting, but I concern myself with moral self-improvement [self-perfecting]; I no longer eat meat and only eat rice cutlets.'" (My translation of the German version in: Brang 2002, page 109/110; the reference given for this quote is "V. I. Lenin: Sočinenija v 36 tt., t. 15, Moskva 1947, page 180".)
There is another translation from the "Marxists Internet Archive":
"[...] the “Tolstoyan”, i.e., the jaded, hysterical sniveller called the Russian intellectual, who publicly beats his breast and wails: “I am a bad wicked man, but I am practising moral self-perfection; I don’t eat meat any more, I now eat rice cutlets.”"
On the topic of Lenin, the famous quote that is often attributed to Lenin "learn, learn, learn" - and that used to be "popular" in kindergartens and schools throughout the USSR and China - does not seem to have been coined by Lenin.

"Learn, learn, learn!" in the Russian original is "учиться, учиться, учиться!" [uchit'sya, uchit'sya, uchit'sya!] (or in Chinese "学习学习再学习" [Xuéxí xuéxí zài xuéxí]). Note that it can also be translated as "Study, study, study!" (see below).
[Off topic update: In China, at least nowadays, another slogan seems to be much more common in schools: "好好学习，天天向上" (Hǎo hào xuéxí, tiāntiān xiàngshàng) which means something like "Study hard, improve/grow every day" but is also sometimes jokingly (or unknowingly) translated literally as "good good study, day day up". This is, I think, a quote by Mao Zedong.]
Rather, this slogan seems to originate from a short story by the Russian writer Anton Pavlovich Chekhov (Антон Павлович Чехов, or in "scientific German" Anton Pavlovič Čechov).
Chekhov was a medical doctor and writer who was strongly influenced by Leo Tolstoy. Even though Chekhov does not seem to have been a vegetarian himself, at least not for most of his life, he did criticize unobjective attacks on vegetarianism.
(The reference given for this is "Čechov: Pis'ma, volume 5, page 163". The original Russian quote seems to have been something like this: "Napadki na vegetarianstvo i, v castnosti, bureninskie pochody na Leskova kazutsja mne ocen podozritel'nymi v etom smysle." ... something like: "Нападки на вегетарианство и, в частности, буренинские походы на Лескова кажутся мне очень подозрительными в этом смысле." (5 February 1892))
It is possible that Chekhov was a vegetarian for a few years because he writes that Tolstoy's philsophy dominated him for 6 or 7 years.
(The reference given for this is "Čechov: Pis'ma, volume 5, page 283-284; also see below: "six or seven years".) 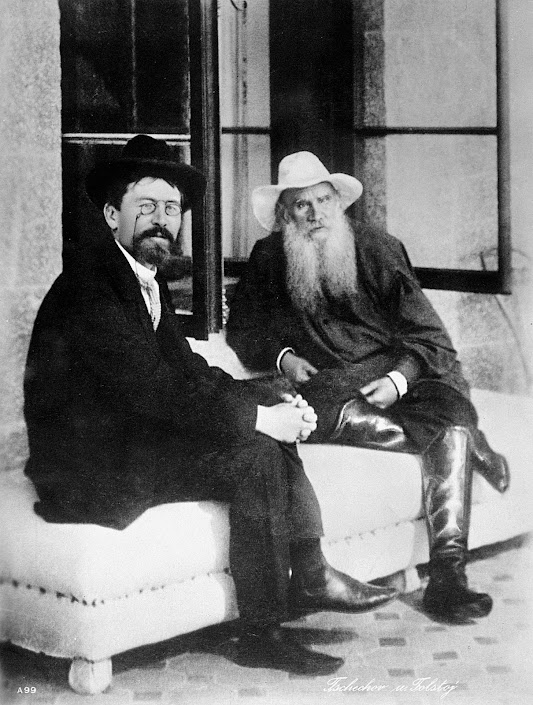