Was Moondog a vegetarian? 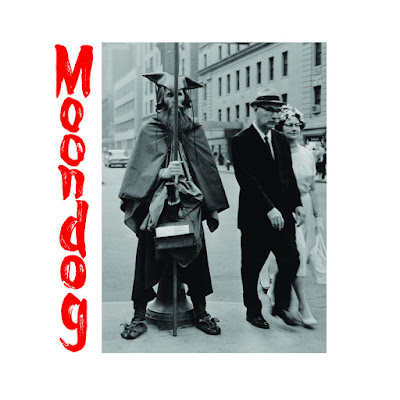 One of my agents has pointed me to this song by Moondog: Enough about human rights (03:37 min; see the lyrics below).

Moondog (1916-1999) was an American, blind, avant garde musician and composer extraordinaire, originally called Louis Thomas Hardin, and also known as the Viking of Sixth Avenue (referring to the corner of 53rd/54th and 6th Avenue, Manhattan, New York City, in the 1960s), ... also known as "the ultimate counter culture figure".

I'm not really too familiar with his work, but a blind eccentric poet writing about non-human animals' rights could almost remind one of Al-Maarri. However, I couldn't find any reference to Moondog having been a vegetarian or vegan.

His biography, written by Robert Scotto, mentions the following, referring to the years 1943 to 1953 in New York City: "[...] eating in was usually confined to porridge in the morning. His diet when he dined out consisted mainly of raw vegetables, fruit, and black bread."
Regarding the years 1960 to 1969 the book states: "His stews became famous (fresh meat and vegetables only), his strong coffee (brewed by boiling water in a can with the beans) a necessity everywhere he went. [...]
[...] he roasted a large turkey, with stuffing and vegetables. [...]
He hunted (with an arrow tied by string to the bow) and fished."
Regarding his time before moving to Germany (so, around mid-1970s) the book states: "Another uncomfortable thing about living with Moondog was that he didn’t pick up after himself or know how or bother to throw out the trash, so I spent some time cleaning up the fast food he brought to his room, like empty boxes from Dunkin’ Donuts and half-eaten bones from Kentucky Fried Chicken."
... And regarding the years 1986 to 1999 (Germany): "Moondog had always enjoyed robust health and an even more robust appetite, despite his risk-taking. In 1986, though, he learned that he had diabetes and would have to be less casual about his diet. No more cupcake at midday! He underestimated the seriousness of his condition, which led to his decline and death. But energy drove him, not ego; it was not in his flight plan to land yet. He rarely cancelled engagements, even when travel became harder on him. His first reaction to the news was to cut his sugar intake (even in his beloved coffee) and get to work. [...]
[...] what others called his odd habits: his sewing, plowing, hunting, writing."

The book also states that his 1992 album "Elpmas" contains "animal rights protest", and that he has written "a couple [of songs] on animal rights (“Pigmy [Pig],” “Enough about Human Rights,” “Aska Me”)" - all of which are on the album "H'art songs". However, "Aska me" and "Pigmy pig" do not contain any lyrics that I would file under animal rights.
"Pigmy pig" does contain the following more or less cryptic lyrics:

Anyway, below are the lyrics to Moondog's song "Enough about human rights". This song was originally published in Germany in 1978 on the album "H'art songs". The song is almost entirely about different animals' rights except that he kind of ruins the song by adding the idea of "germ rights" and "plant rights". The lyrics that you can find online seem to slightly differ from what he actually sings. I don't know if printed lyrics were included in the original "H'art songs" LP. 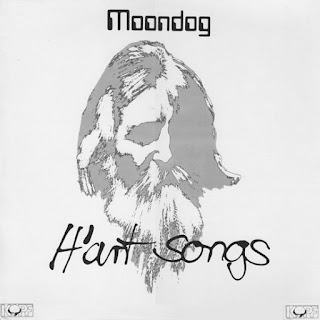 Moodog moved to New York City from the American Midwest in the early 1943, i.e. during World War 2. In 1972 he moved from New York City to Candor, New York State (where he had a country house). In 1974 Moondog moved from the United States to Germany.
Much of his time in Germany he lived in the town of Münster, Northwest Germany, where he died in 1999 (according to Wikipedia, from heart failure). He is buried at the Zentralfriedhof (central cemetary) and at his grave there is a sculpture made after Moondog's death mask (see below). However, he is not currently listed as one of the "famous people" buried at the cemetary on the cemetary's website (2 Aug 2020).
I once was at that cemetary, looking for his grave, unprepared, and it was pissing down as the English say, and I didn't find the grave. I'll probably have another look soon. [See below]

Update 7 September 2020:
Moondog's grave is in the NEW section of the cemetary (Zentralfriedhof Münster). If you enter through the main gate, keep walking straight until you pass through another gate (no actual gate but two pillars). Then keep walking straight. At the very end you'll see Moodog.
Note that the cemetary's opening hours are a bit annoying and it's closed on weekends.
Moondog sculpture, 7 September 2020 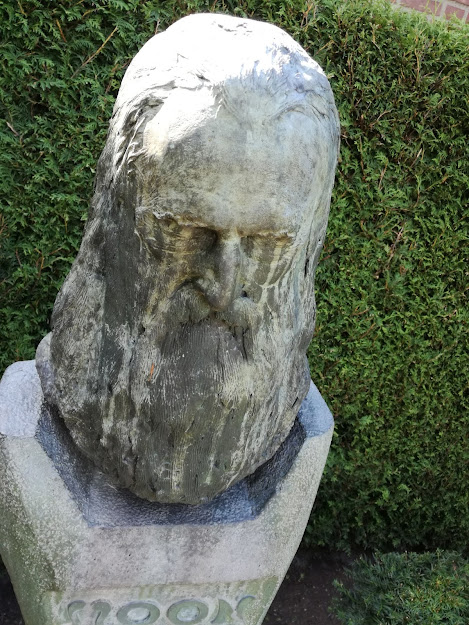