Vegan detective in a time machine: the search for the first vegan margarine


A little while ago I was reading a research paper from 1978, a study with British vegans conducted by the most formidable trio in vegan nutrition science history: Sanders, Ellis, and Dickerson.

In this paper they mention that most of the vegan participants were using a certain brand of margarine: "Most of these subjects were using Tomor kosher margarine (Van den Berghs)." For some reason this caught my attention. 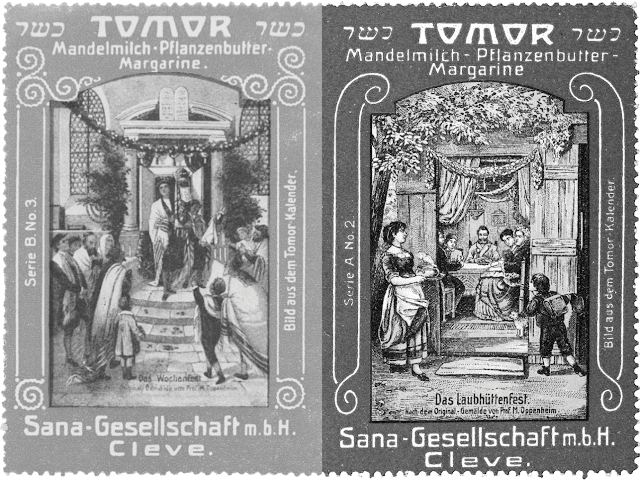 Having spent a few years of my rather uneventful life on the funny island myself, even in the same town, with the tumbling red phone boxes, where Sanders and Ellis themselves used to strut and fret and do their magic (pre-tumbling phone boxes era) ... I have never (knowingly) come across "Tomor" margarine - but apparently it still exists. And it's vegan. But the company that sells it nowadays is called Rakusen's and not Van den Berghs. 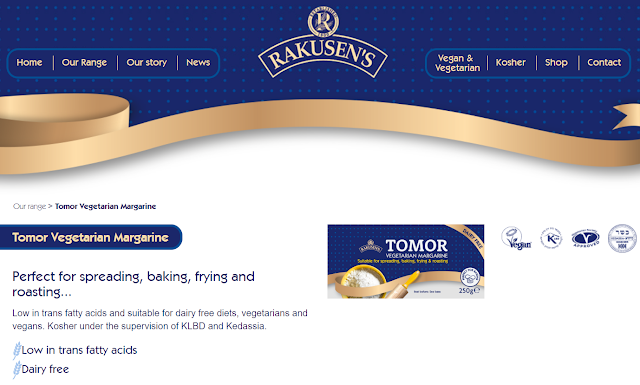 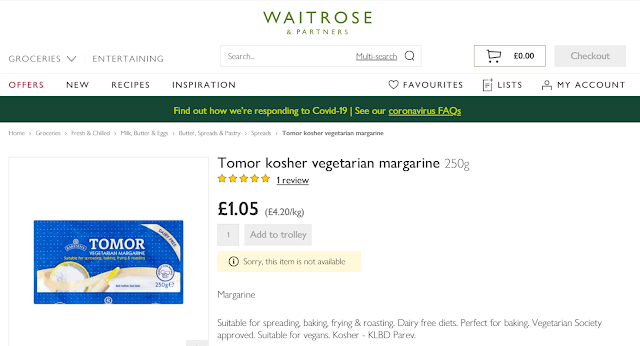 So, what about the original "Tomor kosher margarine (Van den Berghs)"?

In north-west Germany, near the Dutch border (where my uneventful life has turned venturesome), there is a small town called Kleve. The town has a long history of margarine making, and they also have their own specialist in the town's Jewish history ("dude named" Wolfgang Krebs). Mr Krebs found out that in 1888, a Dutch Jewish businessman called Simon van den Bergh opened up a margarine factory in Kleve. Mr Krebs, Kleve's own Jewish history detective, is - I'm speculating - the world's leading scholar on ... Tomor! He has published a whole book about Tomor in German -  which unfortunately I haven't gotten my hands on yet.
(Tomor: eine koschere Magarine vom Niederrhein und ihre religiöse Werbung. Wolfgang Krebs. Kleve am Niederrhein: Verlag für Kultur und Technik, 2002; 65 pages; ISBN: 3-924637-37-7)

Tomor was a special margarine. It was parve (kosher and dairy-free), but it was simply marketed as kosher, and it was sort of accidentally but also sort of deliberately 100% vegan from what I understand.

It seems that the manufacturing of Tomor began not in 1888 but in 1904 and that it was produced on  the same margarine factory grounds as the other margarines but technically by a separate company called "Sana-Werk" (Drouard and Oddy 2016). ("Werk" being German for "factory" or "manufacturing site", also referred to as Sana limited company, or in German "Sana-Gesellschaft m.b.H." (Reuveni 2017))

"Tomor is a kosher dairy-free margarine made in Germany, and the “Sana-Gessellschaft” [should be "Gesellschaft" with one "s"] (Sana Company) of Kleve Kosher Tomor margarine issued collector promotional labels (circa 1904) illustrating various Jewish scenes with German subtitles. Sana’s parent company was the Van den Bergh Margarine Works, founded by Simon Van der Bergh (1819-1907), a Dutch industrialist and an Orthodox Jew. His business manager, John Manger, established the Sana Company around 1900 as an independent factory exclusively for kosher products, including the Tomor brand" (Singer 2016: jewishpress.com, 21 October 2016, checked 2 June 2020) 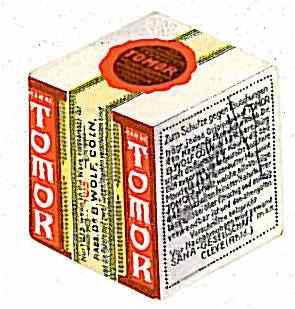 The production of Tomor was expensive, not because it was vegan, but because a rabbi had to oversee the production process to ensure that the whole process was kosher (hehe). The rabbi seems to have been Dr. Pinchas Wolf (Dr. B. Wolf), a rabbi from Cologne (Drouard and Oddy 2016). 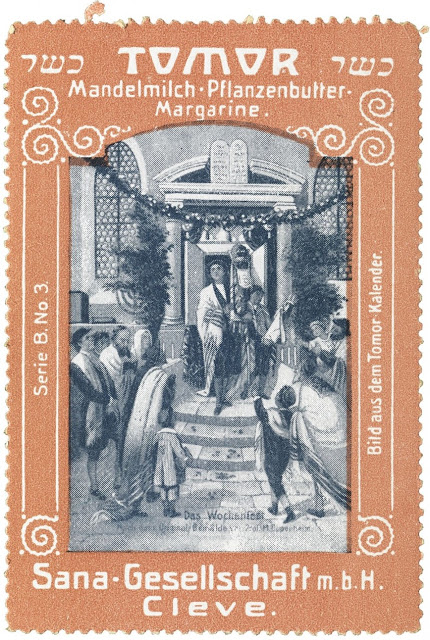 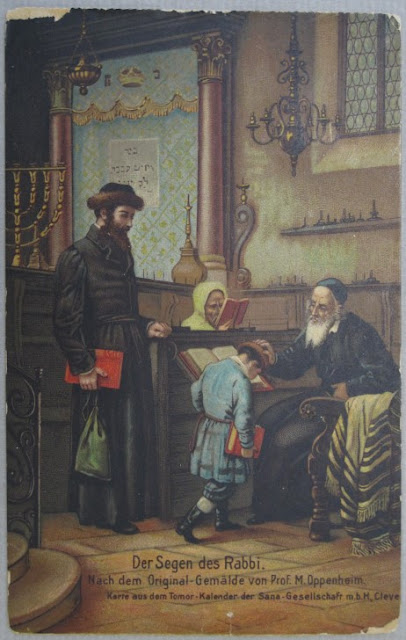 Tomor was also special because it was marketed not just as explicitly kosher but also with a marketing campaign of religious imagery - Jewish religious imagery. I'm not an expert in antisemitism but it seems a safe bet that even then, pre-World War 1, there was quite a bit of hostility towards Jews in Germany and the rest of Europe (and many other places). Tomor was a sort of schmaltzy halakha (Jewish religious law) in margarine form. Tomor was the vegan outreach, and edible Judaism.

"Marketing campaigns depicting margarine as a part of traditional Jewish family life were intended to promote the sense of Jewishness among its consumers. A Jewish cookbook and various pamphlets clarifying Jewish religious law were also used to encourage sales of Tomor margarine." (Reuveni 2017)
The name Tomor comes from the Yiddish "Tamar" or "Tomer" or "Tomor" which means palm tree. Well, Tomor was made from palm kernel fat (aka palm fat/palm oil; today, in 2020, it's made from "Palm oil & Coconut oil 46%, Sunflower oil 34%", see the Rakusen's photo above). Another surprising ingredient of the original Tomor was, apparently, almond milk - whatever exactly they meant by "almond milk" back then (NRZ 2009).

"The name “Tomor” gave a hint of exoticism to margarine and signaled the product’s target population – the Jewish consumer population. The Van den Bergh brothers, who managed the corporation in the early twentieth century, were well aware of the special challenges of keeping kosher and of kosher margarine’s economic potential among Jewish consumers in Central Europe. Accordingly, Tomor margarine’s marketing campaign highlighted the Jewish way of life, illustrating advertisements, calendars, postcards, and other promotional materials with paintings by the famous German Jewish painter Moritz Daniel Oppenheim (1799–1892)." (Reuveni 2017) 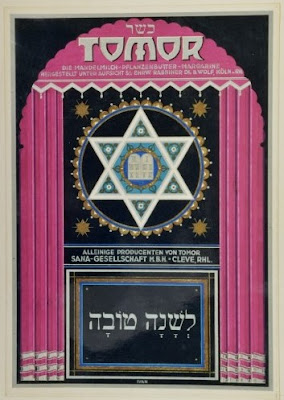 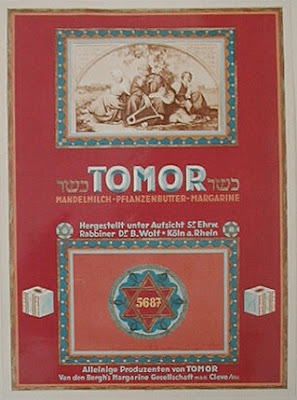 In 1929 a company named "Union" bought up the "Van den Bergh" margarine company (probably including "Sana-Werk" which produced Tomor). Shortly after (also in 1929) the British "Lever Brothers" soap company merged with "Union" ... Out came the monster which we now know as "Unilever".


Until around 1929 - until "Union" bought the company (or maybe until the merger with the "Lever Brothers") - Tomor was marketed with explicitly religious imagery, using images such as a family gathered on the Shabbat or an image of a Jewish wedding. 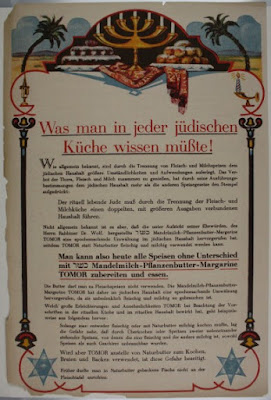 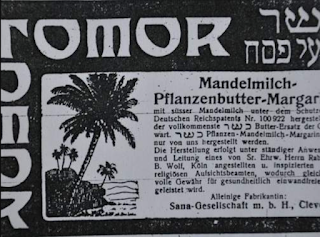 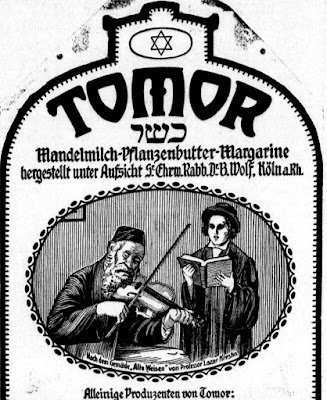 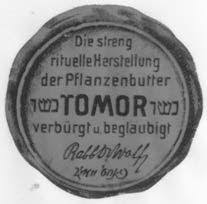 Tomor advertisement stamps, probably from around 1910 (see above) 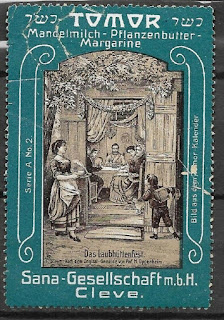 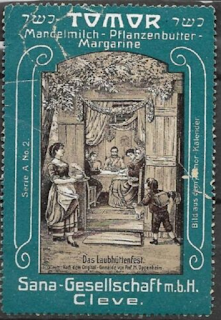 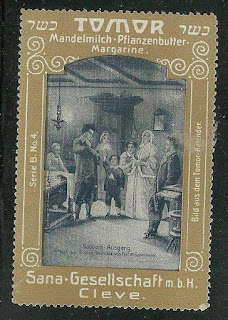 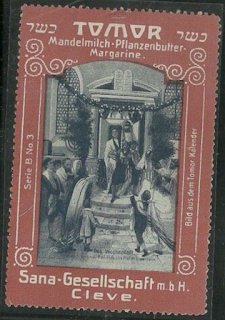 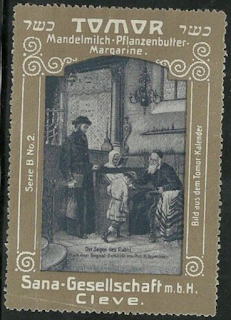 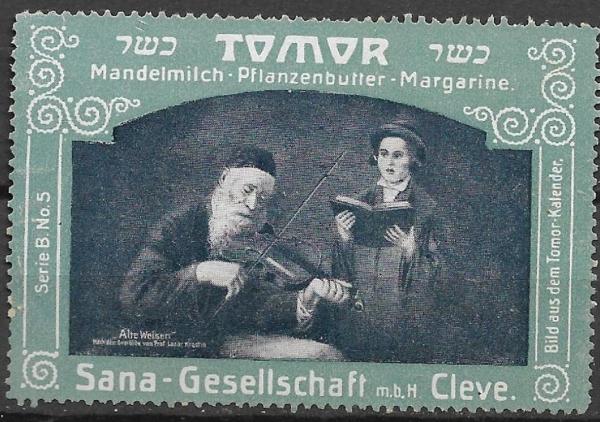 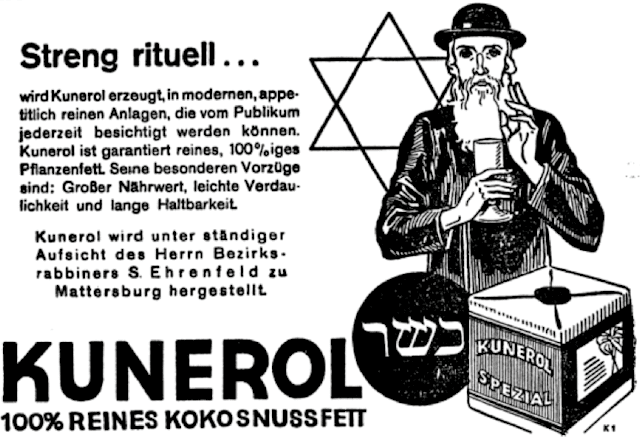 
Around 1933 - Hitler became "Reich Chancellor" in 1933 - the production of Tomor in Kleve was stopped. The company (i.e. Unilever as far as I understand) was moved to England - where the margarine (Tomor) is still available today in supermarkets like Sainsbury's and Waitrose (see above). (NRZ 2009) 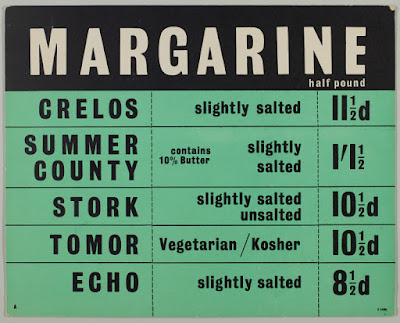 Until 1987 Tomor was produced by the (then) British companies Van den Bergh and Jurgens Ltd - probably that's why Sanders, Ellis and Dickerson specified that the vegans in that 1978 study ate "Tomor kosher margarine (Van den Berghs)" and not Jurgens' Tomor. Probably that same year, 1987, the production rights for Tomor were sold to Rakusen's Foods Ltd. (Drouard and Oddy 2016) which still sells (vegan) Tomor today in the United Kingdom (see above).


The English Wikipedia page on margarine currently (2 June 2020) states: "In the United States, problems with supply, coupled with changes in legislation, caused manufacturers to switch almost completely to vegetable oils and fats (oleomargarine) by 1950 [...][17]." I haven't verified this. But it seems that before 1950 margarines were made mostly from a mix of plant and animal fats, and margarines made without any animal ingredients were likely very uncommon.

Well, could be. I don't have the list of ingredients from 1904 but if it was parve it should have been vegan. And one more thing: it is uncertain if Tomor was truly the first vegan margarine because there seem to have been other kosher margarines apart from Tomor: "Apart from Tomor, there were two other kosher margarines: Zitomor, especially produced for bakeries, and Peri, especially produced to be exported to Palestine." (Drouard and Oddy 2016) It's possible that Zitomor and/or Peri were also vegan. I don't know when they started to be manufactured. In addition, Oddy and Drouard mention that "[i]n 1904, the product Sanella, and pure plant margarine brands Palmkorne, Palmstolz and Tomor were sold on the margarine market." There is a typo: "Palmkorne" was really called "Palmkrone" (which is German for "palm tree crown"; "Palmstolz" meaning "palm tree pride" but Stolz also being a last name, probably the founder's/owner's). It's possible that "Plamkrone" and/or "Palmstolz" were also vegan but "pure plant" margarine might not be equivalent to 100% vegan.
Also, Reuveni (2017) mentions "other brands of vegetarian margarine introduced prior to the [first] world war, such as Palmin and Palmona". Another website mentions the brand of "plant margarine" "Sternmarke" (German for "star brand"; sietz.de, checked 2 June 2020).
Furthermore, it is theoretically possible that the original Tomor contained eggs (or fish by-products) which are considered parve.

The German Wikipedia page on margarine currently (2 June 2020) claims that the first 100% plant-based margarine which was made without chemical additives or excipients (probably they mean hydrogenation of fats) was produced in 1952, by the company Fauser-Vitaquell.
("Die erste rein pflanzliche Margarine, die ohne chemische Zusätze und Hilfsmittel hergestellt ist, wurde 1952 von der Firma Fauser / Vitaquell in Hamburg-Eidelstedt produziert und nur im Reformhaus verkauft.[31]")
I do not know if Tomor was made with hydrogenated fats. Palm kernel fat ("palm fat"/"palm oil") is already more than 80% saturated fatty acids - and the purpose of hydrogenation of fats is to turn unsaturated fatty acids into saturated ones. But if the main ingredient was palm kernel fat and they also added almond milk (of whatever consistency and percentage), and it was sold wrapped in "foil paper" (not in a plastic tub), then it had to be quite hard and hydrogenation of edible oils was already invented in 1901 (Drouard and Oddy 2016). So, it seems quite possible that the palm kernel fat in Tomor had also undergone some degree of hydrogenation. (So, the above statement about Fauser-Vitaquell might be correct.)


Pages from the 2016 book "The Food Industries of Europe in the Nineteenth and Twentieth Centuries" by Alain Drouard and Derek J. Oddy (from pages 124 to 126): 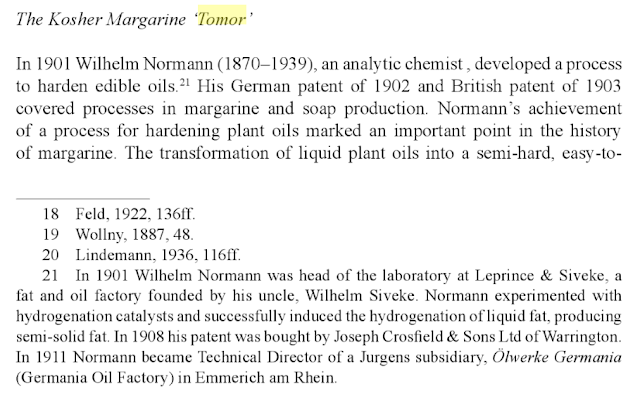 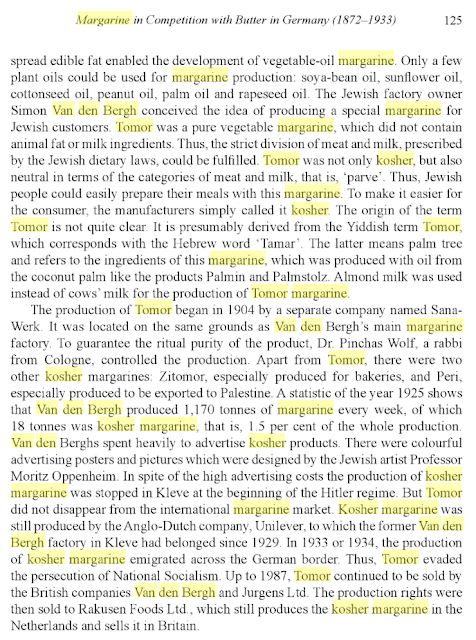 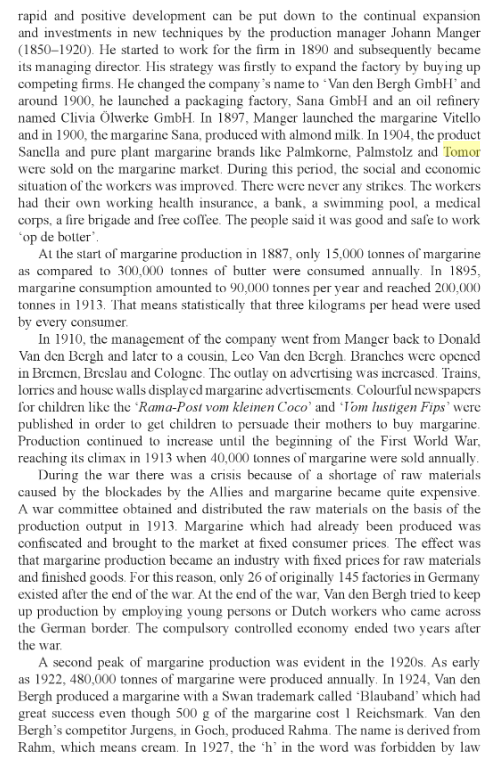