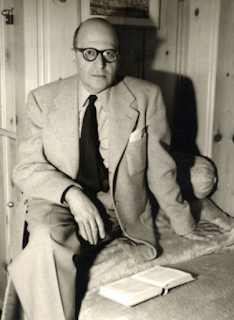 This text was written by the German philosopher Max Horkheimer, and it was originally published under the pseudonym Heinrich Regius in Zürich, Switzerland, in 1934.
As far as I can tell, the original book from 1934, which contains the text "The skyscraper", is hard to get a hold of (or maybe not available at all). It has been republished several times. I'm not even sure what the title of the original 1934 book was. Possibly the title was: "Dämmerung. Notizen in Deutschland"[Dawn. Notes in Germany] but I'm not sure if this was the full title. The original publisher seems to have been "Verlag Oprecht & Heilbling" in Zürich, Switzerland.

Below you can see my translation of the German original. The text was also published in an English version, for example, in a 1978 edition of the aforementioned book, which in English was titled "Dawn and Decline".
My translation is partly, especially in the last third of the text, influenced by the "Dawn and Decline" version. However, I thought that an English version closer to the original German text is possible - and this is what I've attempted. The "Dawn and Decline" version, to me, reads nothing like the German original - but maybe I'm exaggerating.

[My translation:]
"The skyscraper. - A cross-section of the structure of society of the present day would have to show approximately the following: At the top, the leading trust magnates who are however antagonizing each other trust magnates of the various powerful capitalist groups; below the smaller magnates, the big landowners and the whole staff of important employees; below them - split into individual strata - the masses of independent professionals and lesser employees, the political handymen, the military men and professors, of engineers and office managers down to the lady typists; further below, the remnants of self-employed small characters, the craftsmen, shopkeepers and farmers e tutti quanti [and all of them], then the proletariat, from the highest paid skilled strata of labourers via the unskilled to the permanently unemployed, poor, old and sick. Underneath this only begins the actual foundation of the misery from which this building rises because we have so far only spoken of the highly capitalist countries, and their whole existence is supported by the dreadful machinery of exploitation which functions in the semi-colonial and fully colonial territories, that is, in the by far largest part of this planet. Vast areas of the Balkans are a house of torture, the mass misery in India, China, Africa transcends all concepts. Below the spaces in which, in the millions, the coolies of the earth perish in misery, one would then have to depict the indescribable, unimaginable suffering of the animals, the animal hell in human society, the sweat, the blood, the desperation of the animals.
One speaks frequently, these days, of the “intuition of essence” [Wesensschau]. Whoever has once “intuited” [seen] the “essence” of the skyscraper on whose highest floors our philosophers are allowed to philosophize will no longer wonder why they know so little of this, their real height at which they find themselves, and that they only always talk about an imagined height; he [such as person] knows, and they themselves might suspect that otherwise they might become dizzy. He [such a person] is no longer surprised that they would rather set up a system of values than one of disvalues, that they rather talk in detail about “man in general” than about concrete individuals, about existence per se rather than their own existence: for if they did, they could be punished and forced to move down to a lower floor. He [such as person] is no longer surprised that they chattered about the “eternal,” for their chatter holds, as a component of the mortar, this building of present-day humanity together. This building, whose cellar is a slaughterhouse and whose roof is a cathedral, truly affords, from the windows of the upper floors, a beautiful view of the starry sky."

[I have compared several German versions. The one from the 1974 S. Fischer Verlag edition, oddly titled "Notizen 1950 bis 1969 und Dämmerung. Notizen in Deutschland", has a typo.]


Note that only one year before this text was published, in 1933, when Hitler became "Reich Chancellor", Horkheimer fled to Switzerland and later emigrated to New York City.
In 1930 Horkheimer had become a full professor for social philosophy at the Goethe University in Frankfurt. In 1931 he had become the director of the Institute of Social Research at the university. 1949 Horkheimer returned to Frankfurt and again became a full professor for social philosophy (same year?). In 1951 he become head of the university. Max Horkheimer died in the summer of 1973 (Goethe University 2020, checked 8 June 2020).


["Dawn and Decline" English translation:]
"The Skyscraper: A cross section of today's social structure would
have to show the following: At the top, the feuding tycoons of the
various capitalist power constellations. Below them, the lesser magnates,
the large landowners and the entire staff of important coworkers.
Below that, and in various layers, the large numbers of
professionals, smaller employees, political stooges, the military and
the professors, the engineers and heads of office down to the typists.
And even further down what is left of the independent, small existences,
craftsmen, grocers, farmers e tutti quanti, then the proletarian,
from the most highly paid, skilled workers down to the unskilled and
the permanently unemployed, the poor, the aged and the sick. It is
only below these that we encounter the actual foundation of misery
on which this structure rises, for up to now we have been talking only
of the highly developed capitalist countries whose entire existence is
based on the horrible exploitation apparatus at work in the partly or
wholly colonial territories, i.e., in the far larger part of the world.
Extended regions in the Balkans are torture chambers; the mass
misery in India, China, Africa boggles the mind. Below the spaces
where the coolies of the earth perish by the millions, the indesribable,
unimaginable suffering of the animals, the animal hell in human
society, would have to be depicted, the sweat, blood, despair of the
animals.
We hear a great deal these days about the 'intuition of essence.'
Anyone who once "intuited" the "essence" of the skyscraper on
whose highest floor our philosophers are allowed to pursue their
discussion will no longer be surprised that they know so little about
the real height at which they find themselves, and that they always
talk only about an imaginary one. Such a person knows, and they may
suspect, that otherwise they might become dizzy. He is no longer
surprised that they would rather set up a system of values than one
of disvalues, that they rather talk about "man in general" than about
the concrete individual, about being generally rather than their own.
For if they did, they might be punished by being sent to a lower floor.
The observer will no longer be surprised that they prattle about the
"eternal" for as does the mortar, that prattle holds together this
house of present-day mankind. The basement of that house is a
slaughterhouse, its roof a cathedral, but from the windows of the
upper floors, it affords a really beautiful view of the starry heavens."
[pages 66/67, Max Horkheimer, Dawn and Decline, New York, 1978]

A curious note from the Stanford [University] Encyclopedia of Philosophy:
He also left a number of unpublished texts from the period, including a set of notes and aphorisms published shortly after his death (along with a set of aphorisms from the early 30s titled Dämmerung) under the name Notizen 1950 bis 1969. There is no real systematic unity to these writings (Habermas 1993, p. 51 even refers to them as “shot through with contradictions”), but there are common themes that can be explored."
(Standford University 2017, First published Wed Jun 24, 2009; substantive revision Wed Aug 30, 2017, checked 8 June 2020)

In a book from 2011, John Abromeit wrote the following about the text "The skyscraper":
"In an aphorism entitled “Sky Scraper,” Horkheimer continues his reflections on epistemology and his critique of philosophical attempts to deny the socially determined character of knowledge. He uses the multiple stories of the skyscraper as a metaphor for the various levels of power and privilege in the world, from the corporate magnates to the workers and the unemployed in the industrialized nations all the way down to the destitute masses in the colonialized countries, and even to the animals below them. With this image in mind, he problematizes the abstractly universal and essentialist claims made by contemporary phenomenologists[.]" (Abromeit 2011)


Note that Abromeit writes "even to the animals", as if consider nonhuman animals morally was an extreme step to take - in 2011. Horkheimer - thought not a vegetarian - took this step in 1934, or whever he wrote the text.

Abromeit also makes the following comments about "the skyscraper":

"Like the guileless philosophers in the top of the skyscraper, those fortunate enough to exist in the power centers of society assume that their conceptions of space are universal." (Abromeit 2011)

In my (lay) opinion, with his text "The Skyscraper" Horkheimer is making a moral statement, about the man-made hell and indescribable injustice that the skyscraper depicts. Abromeit sounds more like the philosophers from the top floor.

In addition, Abromeit discloses another interesting piece of information ... about Horkheimer and the moral consideration of animals:

"Horkheimer’s concern for the suffering of animals runs throughout his work. See, for example, the aphorism “The Skyscraper,” in Dämmerung, op. cit., p. 66, or the draft at the end of Dialectic of Enlightenment, “Man and Animal,” op. cit., pp. 245–55. Horkheimer was also an active member of the Society for the Prevention of Cruelty to Animals in New York in the 1930s. In “Materialism and Morality,” Horkheimer credits Schopenhauer for drawing attention to the similarities – if, of course, not identity [Abromeit's words] – between the joys and pains of humans and animals and the resulting responsibility humans have to treat animals ethically [.]" (Abromeit 2011)