A case report from Paris, France, was just published describing a 13-month-old boy with severe vitamin D deficiency which resulted in rickets – a disease of soft and brittle bones – and several bones fractures. The title of the article is “Case report of nutritional rickets in an infant following a vegan diet”. 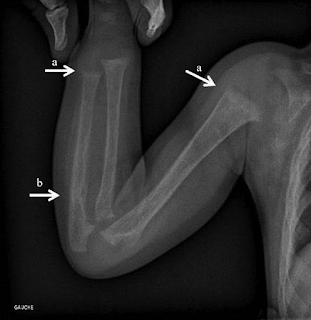 The picture shows an enlarged wrist (a; wrist) and a fracture in the middle of the ulna (b; forearm); for more info, see original article. The boy also had a “rachitic rosary”, a typical sign of rickets.

The abstract (summary) of the article includes this (partly incorrect) information: “We report the case of a 13-month-old infant who was referred to the pediatric emergency department because of psychomotor regression with four bone fractures due to nutritional rickets. The reason was prolonged breastfeeding from a vegetarian mother followed by a vegan diet for the infant after weaning.”

The article correctly describes what a vegetarian and a vegan diet is (no animal products):
“Vegetarian diets exclude all types of meats, fish, shellfish, and crustaceans, but in lacto-ovo vegetarian diets, dairy products, eggs, and honey are tolerated. Vegan diets avoid all animal products such as meat, fish, shellfish, insects, dairy, eggs, and honey.”
But then the article goes on to say: “A macrobiotic diet is a vegan diet where only cereals, pulses, vegetables, seaweed, soy, and occasionally fish are consumed.” As this very sentence shows, a macrobiotic diet is not necessarily (or even typically) vegetarian or vegan, because it includes fish.

Only towards the end of the article the authors mention that the boy “was exclusively breastfed up to the age of 7–8 months [which is too long – at 6 months old babies should start eating complementary foods], when complementary feeding was introduced consisting of a vegan diet that included rice flour, fruits, vegetables, legumes, oatmeal, algae powders, black sesame, and almonds on the advice of the Asian-born maternal family, with the addition of a spoonful of olive, peanut, and fish oils twice a day, but without any pharmaceutical vitamin D supplementation.” It seems the boy did not get any nutrient supplements. Importantly, he did not have a vitamin B12 deficiency, which further indicates that he did consume enough animal products (fish oil) and that his breastfeeding mother consumed enough animal products (fish and eggs) to supply the boy with enough vitamin B12 without any supplements or (likely) fortified foods. This shows that this boy was not given a vegan diet at all.
As already mentioned, the “vegetarian mother” was not a vegetarian: “In our case, the infant did not have a vitamin B12 deficiency because his mother ate some eggs and fish during pregnancy and breastfeeding.”
In any case, this case report offers an important lesson for vegans (a lesson that is not new at all). What not to do: The boy was born at home, and then only seen by a pediatrician once he was 12 days old, … “and then missed all further check-ups, including vaccinations, until the age of 12 months when his parents became worried about a decrease in appetite and weight loss that had begun at 10 months of age.” (1)