[* It's not sure that her diet was actually that low in iron. See the two "Update" notes at the end.]

A new article from Australia (Gold Coast University Hospital, Southport, Queensland) in the medical journal BMC Ophthalmology reports the case of a 21-year-old vegan woman with severe iron deficiency anaemia. (In medical jargon this kind of report is often called a "case report" or a "case study", the person in the report being the "case".) The title of the article is "Central retinal vein occlusion secondary to severe iron-deficiency anaemia resulting from a plant-based diet and menorrhagia: a case presentation.".
The iron deficiency anaemia was caused by a combination of (1) an apparently very low dietary intake of iron (at least that's what the article's authors assume), and (2) very heavy menstrual bleeding.

The iron deficiency anaemia was very severe and lead to a blood clot or another sort of blockage in a vein in the retina of her right eye. The technical term for this medical issue is central retinal vein occlusion (CRVO). And this caused her to have vision problems with that eye. Luckily this was reversible with medical treatment, including iron supplements. 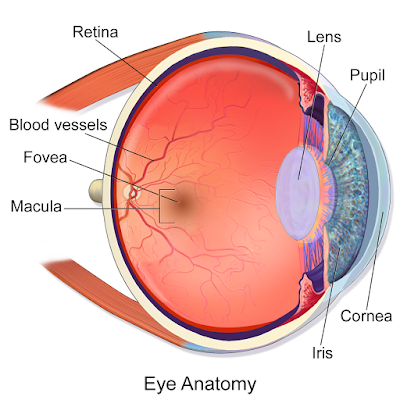 The young woman was seen by a medical doctor after having already experienced the following symptoms:
and

The young women did not have any of the following medical problems: venous thromboembolism, diabetes, high blood sugar, high blood pressure, raised intra-ocular pressures, rubeosis iridis (iris disease), thrombocytopenia (blood platelet deficiency), vitamin B12 deficiency, hepatitis, tuberculosis, as well as a range of other conditions that were tested for.

The woman was treated with "packed blood cell transfusion, intravenous iron supplementation and subsequent oral supplementation. She also received an intra-vitreal injection (IVI) of, an anti-vascular endothelial growth factor (VEGF), aflibercept."
Three weeks later her eyesight was almost back to normal. She received oral iron supplements and her iron levels (haemoglobin etc.) went back to normal after several weeks. After one year the woman was tested again, and her eyesight was normal, and all the eye issues had resolved.

The authors state: "She now incorporates some red meat into her plant-rich diet and has periodic blood tests to monitor for anaemia with her general practitioner."

Was it necessary for her to go back to eating meat?
Very unlikely. Vegan diets can provide large amounts of iron, and even if the iron bioavailability is lower than from meat this can be easily made up for by the the higher iron content of legumes and dark-green leafy vegetables. For good sources of iron and other important nutrients for vegans, see here.

Note, that what this woman ate exactly was not mentioned at all. She might have been following a legume-free vegan diet, or a 100% raw vegan fruit-based diet, or ... Certainly, her diet was very low in iron, and this is not typical for vegan diets, especially not if you include legumes in your diet - in some form or other such as soya milk, tofu, tempeh, texturized vegetable protein, beans, chickpeas, etc. - every day. Amenorrhoea (absence of menstrual bleeding in menstruation-age women) is a severe condition - and this is not at all common in vegan women. However, among 100% raw foodist women it is on the other hand not at all unheard of. So, what I would speculate is that this young woman was very misinformed about healthy vegan diets, and was following a vegan dietary pattern that largely excluded iron-rich foods, which again is not at all typical for vegan women to do.

If someone has has iron deficiency anaemia (IDA) is it likely that they will develop this eye condition described above (CRVO)?
No. "CRVO is a rare complication of IDA."

As the authors state, too much iron isn't good either: "Iron is essential for retina metabolism and function; however, excess iron contributes to disease states in the eye. Therefore, supplementation needs to be judicious."


The authors state: "Iron deficiency anaemia (IDA) is a known cause of CRVO, with previously documented cases in the literature [2–6]." None of these five previously documented cases (Taubert et al. 2008 (a woman who had eaten mostly just junk food for several years), Nagai et al. 2005, Kacer et al. 2001, Shibuya and Hayasaka 1995 (a young woman with anorexia nervosa), Kirkham et al. 1971) were vegetarians or vegans. So the case report discussed here seems to be the very first case of this condition in a vegan ever reported.


The authors also - strangely - state that: "In Australia, 11.2% of the population have identified with veganism in 2016, up from 9.7% in 2014." Surely, this number cannot be correct and must be referring to all types of vegetarians or even semi-vegetarians not vegans in Australia.
The article referenced for this information does not even mention the word "vegan" but rather states "Between 2012 and 2016, the number of Australian adults whose diet is all or almost all vegetarian has risen from 1.7 million people (or 9.7% of the population) to almost 2.1 million (11.2%),". This means, the authors interpreted this number for semi-vegetarians and vegetarians to be people who "have identified with veganism".
[Update: According to "Vegan Australia", there are no accurate numbers for vegans in Australia. There have been surveys and estimates, but the figures seem to vary a lot. The actual number is likely to be very roughly near 1%, or maybe 2%, of the population, similar to other "Western" countries. For more info see here, and here.]


The authors state that: "Dietary iron can be obtained from both plant and animal sources. Theoretically, it is possible for one to obtain sufficient iron solely from plant-based products. However, this is often not the case and is related to the lower bioavailability of iron in plant products compared to animal sources [23, 24]."
"Often" is a more or less vague statement. Most vegans do seem to get enough iron (again, see here, for example).


The authors state: "IDA [iron deficiency anaemia] is a common form of anaemia, affecting 4.5 to 18% of the US population, and rates of 64.7% reported in central Asia [25]. It is a disease of either insufficient dietary intake or absorption or excessive loss from bleeding – where both factors were present in our patient. Iron supplementation is appropriate in the setting of deficiency, however, should be judiciously administered. Excess iron in the form of ferrous can catalyze the conversion of hydrogen peroxide to highly reactive oxygen species (ROS) and radicals [26] with the products implicated in neurodegenerative diseases (e.g. Alzheimer’s disease) [27] and a range of ocular diseases (e.g. AMD [age-related macular degeneration], diabetic retinopathy and others) [22]. CRVO is an uncommon entity in the young adult population and a thorough search for an underlying systemic etiology must be undertaken. This case report illustrates a health-conscious young adult suffering from iron-deficiency anaemia secondary to a [very low-iron] plant-based diet, and subsequently presenting with CRVO. A diet rich in vegetables is beneficial to retina health but a diet limited to plants-only predisposes one to potential nutritional deficiencies. Supplementation, while appropriate in deficiency states, needs to be judicious. The case highlights that individuals with vegan diets should have their hematocrits, serum iron levels, and serum B12 levels checked periodically, and given supplements if medically indicated."
A vegan diet does not necessarily "predisposes one to potential nutritional deficiencies" - but it's best to be aware of good sources of a few different nutrients (first of all vitamin B12, i.e. vitamin B12 supplements). For us vegans it is not necessary to have our iron and vitamin B12 checked regularly - it is necessary however to consume enough iron and vitamin B12 which can easily be done (again, see here for nutrient recommendations for vegans).

For more evidence-based info on iron and vegan nutrition in general see:

Update 22 March 2020:
The article states that the young woman had consumed very little iron. However, this does not seem entirely clear. I've contacted the authors and they (kindly took the time and) stated that:
It doesn't seem clear why she did not eat the foods stated, but it doesn't seem either like this diet would be especially low in iron. Contrary to what I had speculated she did not follow a 100% raw food diet. She had mentioned that she was trying to consume more raw foods when she was able, but that attempt had not been fully successful because her family was not supportive of it. Her family did not consider themselves as vegan but had also moved to a diet with less-meat consumption as I understand. Following the diagnosis, the young woman had initially continued her vegan diet with iron supplementation but at when she was seen by the doctor after 1 year, she had begun incorporating small amounts of red meat into her diet for health reasons.

To be honest, I'm doubtful whether her severe iron deficiency was due to her diet. It might be, that this particular individual was not able to absorb iron well (for whatever reason). It might be possible that a well-planned vegan diet plus iron supplements could have worked out well for her. It could also be possible that in her particular case iron from red meat plus iron supplements worked and works better than a well-planned vegan diet plus iron from supplements. But this is pure speculation. I will update this if I find out more.

Take home message for all vegans and vegan activists is that we should know a few simple things about iron - which many (if not most) vegans already do know (again, see point 6 on this list, and feel free to share this list with other members of our species).