Iodine is a mineral and an essential nutrient. We should be careful to avoid both deficiency and excess of iodine.

In most parts of the world the soil is deficient in iodine. Because of this practically worldwide there is a recommendation to produce and consume iodine-fortified salt (iodized salt). Note that salt is only a relevant source of iodine if the packaging states that it has been iodized.

In many countries cow's milk is the main source of iodine. This is somehow strange because cow's milk is not "naturally" rich in iodine. However, cow's milk often contains relevant amount of iodine for two reasons:
1) Iodine-containing cleaning solutions are used to clean the dairy cows' udders and the milking machines.
2) Iodine is often added to the feed of dairy cows, especially during winter.

Another rich source of iodine are fishes and other animals from the sea.

As vegans don't eat dairy products or fish - and might not use iodized salt - vegan diets can be very low in iodine. Vegans diets that include seaweed can also be very high in iodine, even excessively high, and iodine excess can be particularly harmful in individuals with iodine deficiency.

That means vegans (and everyone else) should assure a good everyday intake (not too much, not too little) of iodine. An adequate iodine intake is extremely important during pregnancy and breastfeeding and during the first two years of life.

Good sources of iodine for vegans are iodized salt OR an iodine-containing supplement (like the Vegan Society VEG 1 supplement) OR small amounts of seaweed several times per week (preferably lower iodine content seaweed such as nori, wakame or dulse). (See my nutrient recommendations for vegans here.)

How much iodine does Lithothamnium calcareum-fortified soya milk contain?

According to the German drugstore/health food supermarket chain "Alnatura" their own "Alnatura" brand Lithothamnium calcareum-fortified soya milk contains about 4 to 7 µg of iodine per 100 ml. (emails from March 2019, and from May 2019)

According to the customer service of "Hain Celestial" who are the distributor of the "Bio Bio" brand Lithothamnium calcareum-fortified soya milk at the southern German supermarket chain "Aldi Süd" this soya milk contains around 4 to 7 µg of iodine per 100 ml.
This is based on the assumption that the seaweed Lithothamnium calcareum contains about 14 000 µg (5 000 to 18 000 µg)  of iodine per 1 kg of seaweed. (email from May 2019)


According to "Alpro UK" their Lithothamnium calcareum-fortified soya milk contains about 8 µg of iodine per 100 ml. 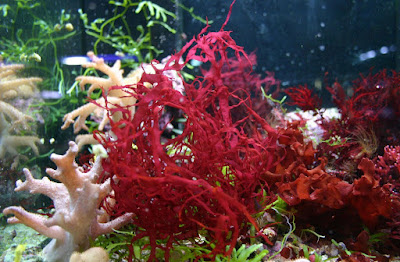 Alpro also produces a special soya milk, specifically designed for small children from 1 to 3 years of age. This soya milk is called "Soya Growing Up drink 1-3+" and is fortified with vitamin B12, vitamin B2, vitamin C, calcium, iron, and iodine. According to the Alpro UK website it contains 24.5 µg of iodine per 100 ml. But it also contains added sugars, flavourings, and a stabiliser (Gellan gum). It seems that this product is available in the United Kingdom and in Holland and Belgium ("Soja Groeidrink 1-3+"). 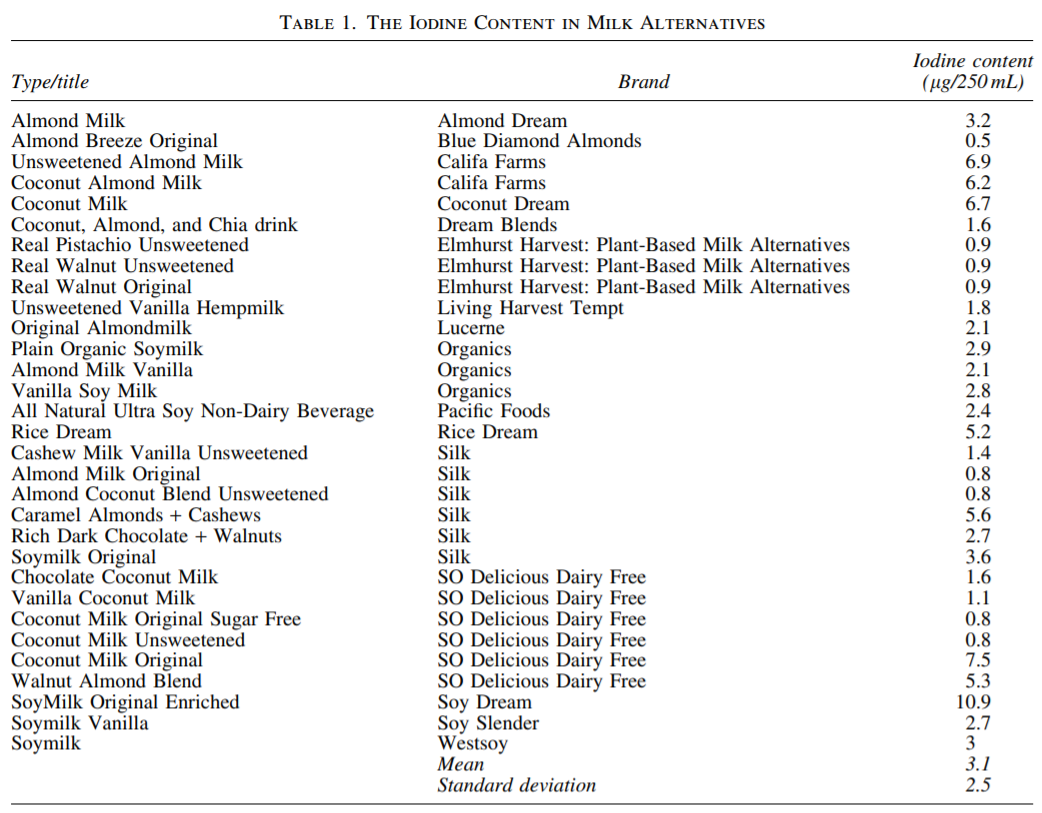 Vance et al. 2017 analysed the iodine content of several plant milks, also in the United States.
They found one soya milk with added seaweed (likely Lithothamnium calcareum) which contained ~10 µg of iodine per 100 ml. One of the rice milks also had seaweed added to it and contained ~5 µg of iodine per 100 ml. The authors did not state which of the other plant milks had seaweed added to them (quite possibly the one with a higher content of iodine, such as "Blend B" and "Coconut C").


These two studies confirm an iodine content of ~4 - 10 µg per 100 ml in plant milks with added Lithothamnium calcareum.