Do people from China like the taste of soy milk (Dòujiāng, 豆浆)?

Background: A recent article by Verduci et al. (2019) in the nutritional sciences journal Nutrients has stated that “Unfortunately, a well-known disadvantage of soy milk preparation is a characteristic beany flavor” . This quite obviously is a subjective claim – something that should not be presented as an objective observation in the scientific context. Verduci et al. also made this statement in the context of feeding infants who are not yet accustomed to either the characteristic taste of soy milk or that of cow’s milk.

There are different kinds of soy milk in China. Traditional soy milk (“soy pulp”, Dòujiāng, 豆浆) is made from soy beans and water. Sugar or salt may be added. There are other kinds of soy milk in China, and these have different Chinese names. There is fermented soy milk, a specialty of Beijing (“bean juice”, Dòuzhī, 豆汁; as far as I can tell this is made from mung beans, not soy beans), and “colorful soy milk” (“grain soy milk”, Wǔgǔ dòujiāng, 五谷豆浆) which includes many ingredients such as millet, black rice, buckwheat, oats, red beans, sugar, etc. Processed soy milk may be called “Dòunǎi” (“soy milk”, 豆奶) – in contrast to freshly-made, traditional soy milk (“soy pulp”, Dòujiāng, 豆浆).

It was the hypothesis of this survey that the majority of participants would answer the question “Do you like the taste of soy milk?” with “Yes”.

Methods: 135 people from China received the following message on an internet language learning app: “Hi, I’m doing a survey with people from China: Do you like the taste of soy milk (豆浆)?” All recipients of this question were from China, in this case including Hong Kong and Taiwan, and were native speakers of Chinese (Mandarin). Their age and gender information was taken from their profiles. The age given on the profiles might not always have been completely accurate. Based on their profile information almost all of the participants live in China, while a few live in Europe (exact number not quantified). Based on their profile pictures all participants were of what is commonly referred to as “Han Chinese” ethnicity.
Answers classified as “yes” or “no” were clear statements of “Yes, I like the taste” or “No, I do not like the taste”. Answers with the following statements were classified as “OK”: “neither like nor dislike”, “just so so”, “OK but not a big fan”, “OK but not very like”, “OK but don’t love”, “OK with it”, and “I don’t hate it”.

Results: 116 recipients of the question replied. One of these replied “I don’t know”. Out of the remaining 115 participants, around 62% were female, and around 38% were male.
Around 76% replied “Yes”, while around 10% replied that the taste is “OK, but not great”, and around 14% replied that they do not like the taste of soy milk. See tables below. 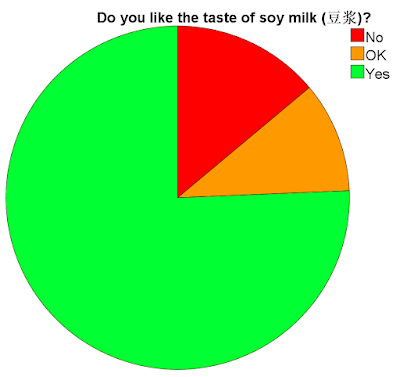 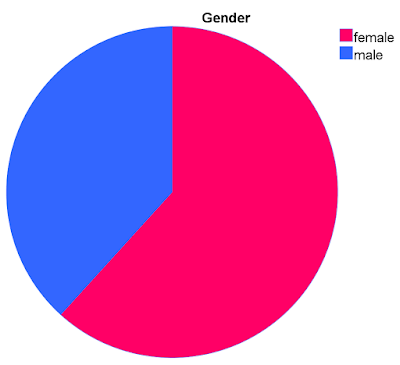 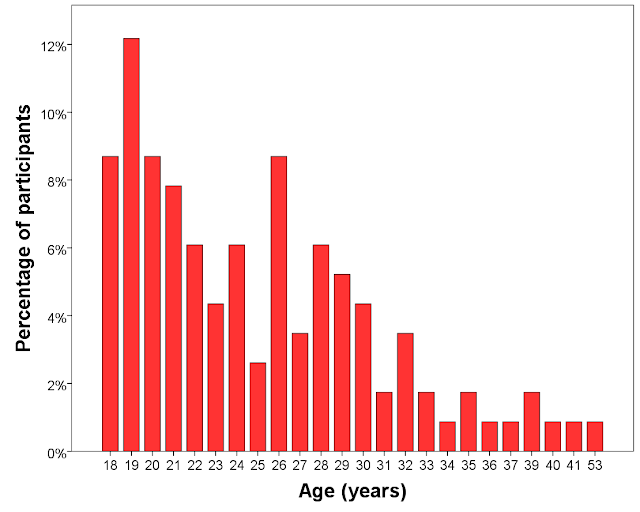 There was no statistically significant difference in age between the two genders (male/female). Kruskal Wallis test, p-value = 0.947

There was no statistically significant difference in age between the three answer groups (“yes”, “OK”, “no”). Kruskal Wallis test, p-value = 0.881 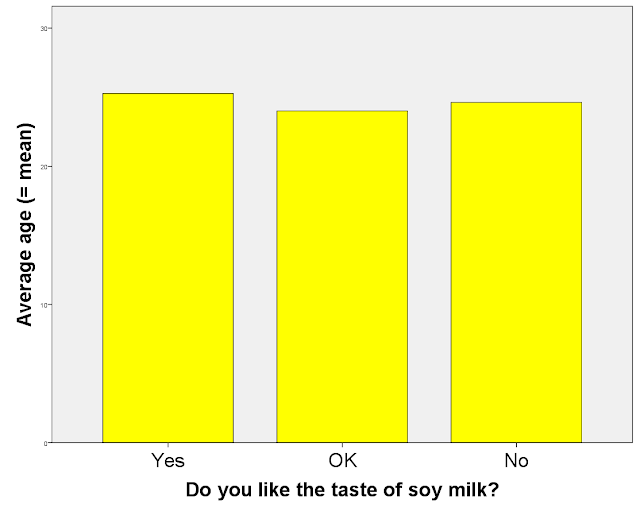 There was no statistically significant difference in answers given between the two genders (male/female). Chi-square test, p-value = 0.498 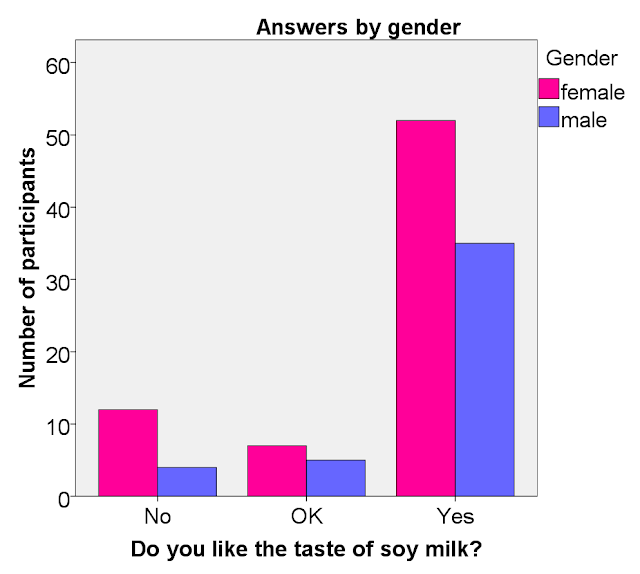 There was no statistically significant difference in answers given between the age group of <25 years and ≥25 years. Chi-square test, p-value = 0.631 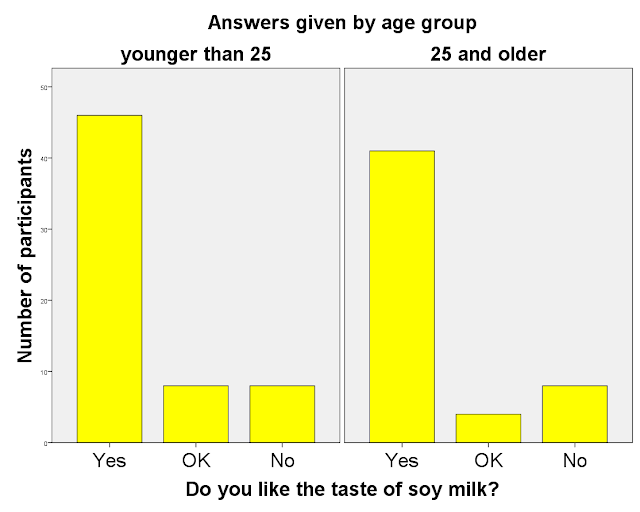 Discussion:
One limitation of the survey is the relatively small number of participants. Another limitation is that information on which Chinese provinces the participants came from was not collected. A further limitation is the selection bias due to the fact that all participants were users of a language learning app.
In a study in the United States, Lawrence et al. (2016) found that “Age had no effect on overall liking, while ethnicity did (Caucasian/African American compared with Asian; P < 0.05). Caucasians/African Americans differentiated soymilks more than Asians [They probably mean of East Asian ethnicity] and assigned a wider range of liking scores than Asians (2.1 to 7.2 compared with 4.0 to 6.1). Three consumer clusters were identified. Sweet taste with vanilla/vanillin and sweet aromatic flavors and higher viscosity were preferred by most consumers […]. Drivers of dislike were not identified for Cluster 1 consumers while Clusters 2 and 3 consumers (n = 84, n = 80) disliked beany, green/grassy and meaty/brothy flavors and astringency. […]
[…]
[…] Age had no effect on U.S. consumer liking of soymilk, but ethnicity did have an effect. Asians did not use the full range of the hedonic scale, and all overall liking scores were centered around the middle of the scale, while Caucasian and African American U.S. consumers used a much wider range of the hedonic scale. […] Universal drivers of liking were vanilla/vanillin and sweet aromatic flavor, sweet taste, and a higher viscosity with differences among consumers for sweet taste intensity and tolerance for beany and cereal flavors and bitter taste. These findings can aid product developers to create a soymilk that is appealing to a wide population, and also to reach segments of the population that have not yet been accommodated.”

What about the “beany flavor”?
Verduci et al. 2019 were referring to Sethi et al. 2016 regarding the expression “beany flavor” – however, the beany flavor has been discussed in the literature since the 1970s .
The Merriam Webster dictionary states: “beany […] of an oil: marked by an off-flavor suggestive of that of beans”.
--- Technical stuff:
Sethi et al. (2016) wrote: “Traditional process of soy milk preparation leaves a product with limited shelf life and a characteristic beany flavor. Modern soy milk production utilizes advanced technologies and equipments to maximize nutritional value, shelf-life and convenience with reduced beany flavor (Table 2). In view of its popularity, a wide array of variants is available in the market. Based on solids concentration, available variants are light, dairy like, and rich soy milk, with respect to formulation, sweetened, original and flavored soy milk, with respect to fortification, regular, enriched, and blended soy milk (Liu 2004). Several methods were tested for their efficacy in removal of off flavor or beany flavor. Some of the widely accepted methods in order to remove or deodorize the beany flavor of soy milk are: vacuum treatment at high temperature which results in stripping off of most volatile compounds (short chain fatty acids, sterols, sulphur compounds etc.), leading to a better acceptable product to the consumers, Cornell hot grinding method where soaked soybeans were ground with boiling water or steam to obtain a slurry at a temperature of 80 °C, the slurry was then kept at this temperature for 10 min in order to inactivate lipoxygenase, Illinois pre-blanching method (Fig. 2) where soaked soybeans were blanched in boiling water to inactivate lipoxygenase. Apart from these methods, alkaline soaking, use of defatted flour, soy protein isolates and concentrates have reduced beany flavor to some extent.
[…]
The consumption of sesame milk can overcome the limitations associated with soy milk consumption such as presence of flatulence causing factors, prevalence of allergies towards soy proteins and beany or off flavor (Zahra et al. 2014). Sesame milk is commercially available under the brand name Ecomil (Spain), Vegemil (South Korea) etc.
[…]
Soy products are gaining popularity as economical source of quality protein and their positive effects on health but presence of disagreeable or beany or unpleasant flavor needs to be eliminated or reduced in order to increase the acceptability of products in terms of taste and flavor (Friedman and Brandon 2001). The two main reasons responsible for off flavor are: presence of unsaturated fatty acids and the presence of lipoxygenases (Maestri et al. 2000). Substantial efforts have been made by several researchers in exploring technologies and processes to eliminate beany flavor (Chiba et al. 1979; Farkas and Goldblith 1962; Fujimaki et al. 1965; Kon et al. 1970; Nelson et al. 1976; Wilkens et al. 1967) but, this area still needs a consideration with further exploration by the use of newer and advanced technologies. Commonly practiced approaches to solve this problem are: inactivation of enzymes, removal of off-flavours by deodourization and masking of off-flavour by addition of artificial or natural flavourings (Table 2). Lipoxidases catalyze the formation of nonvolatile hydroperoxides from unsaturated fatty acids which, in turn, decompose into medium-chain aldehydes and alcohols such as n-hexanal and n-hexanol and are associated with beany or off flavor.
[…]
Thereafter, organoleptic testing was carried out and a significant reduction in green beany flavor was observed (Chiba et al. 1979). US patent 4744524 issued on 17 May, 1988 described the equipment used to produce soy milk with no beany flavor and bitter taste of traditionally processed soy milk.
[…]
Further US patent 7258889 B2, describes a method of preparing bean-less flavor soy milk using carbon dioxide in a state of sublimation. The process did not involve thermal and chemical treatment and comprised of various stages, holding soybeans with deaerated water under an atmosphere of carbon dioxide for a combination of time and temperature effective to allow soaking and swelling of soybeans, washing of soaked and swollen soybeans with water to remove oligosaccharides and ripening enzymes (as they are water soluble and gets dissolved in water used for soaking), grinding of washed soybeans in an atmosphere of carbon dioxide by bubbling in carbon dioxide in a sublimed state (−78 °C at atmospheric pressure) to form a slurry followed by filtration of slurry to obtain soy milk. The product obtained had high protein yields as process did not involve denaturation due to thermal treatment and no beany or bitter flavor (Alejandro 2007). The advantages of this process are: little resident time, continuous process and soft process conditions. The product need not to be homogenized as the soy milk obtained was highly stable. It is a well known fact that the modification of traditional processing method by introducing steps like roasting, blanching and soaking in alkaline conditions have been known to reduce beany flavor in legume based milk and hence, improved the acceptability of the product. Addition of flavorings and sugar has been also found to increase the overall acceptability of plant-based milk. Blending of legume milk with cereal milk and nut milk have also helped in improving quality and wider acceptability of plant-based milk.
[…]
Sprouting of soybean increases protein content and also reduces fat, trypsin inhibitor and phytic acid whose reduction otherwise requires intense heat treatment or methods like ultrafiltration [.] The results inferred that apart from improved nutritional profiles soy milk from sprouted beans had higher soy milk index, good colour characteristics and high sensory acceptability due to absence of beany flavour and odour.”

Conclusion: The results of the survey confirm the hypothesis of the survey. The majority of participants indicated that they do like the characteristic taste of soy milk which is typically more pronounced in traditionally made, i.e. freshly made soy milk without added flavorings.