Summary of all summaries: At the moment we don't know much about the life expectancy of vegans. Vegan diets can be healthy or unhealthy, and diet is only one lifestyle factor, ... and genetics are also an important factor that influences our health. Vitamin B12 deficiency could lead to a lower life expectancy. A healthy vegan diet (or other healthy plant-based diet) can likely lead to a longer life expectancy, better health and better quality of life. Note that it does not make much sense to compare yourself (a single individual) to another single individual - even if that individual is your grandmother. You both have different genetics, a different history of life events, and likely, but not only, different lifestyle factors.

If you are a vegan or a near-vegan plant-based diet "eater" it is useful to know some basic things about several nutrients - especially vitamin B12. You can see my recommendations here.

At the monent there are two studies which include large numbers of vegans: the EPIC-Oxford study and the Adventist Health Study 2 (AHS-2) - see below.

Number of vegans in this analysis: 6301

Results: The vegans in this analyis had a 12% lower risk of early death - but this result was not quite statistically significant, possibly because the number of vegans is still too low for such an analysis. 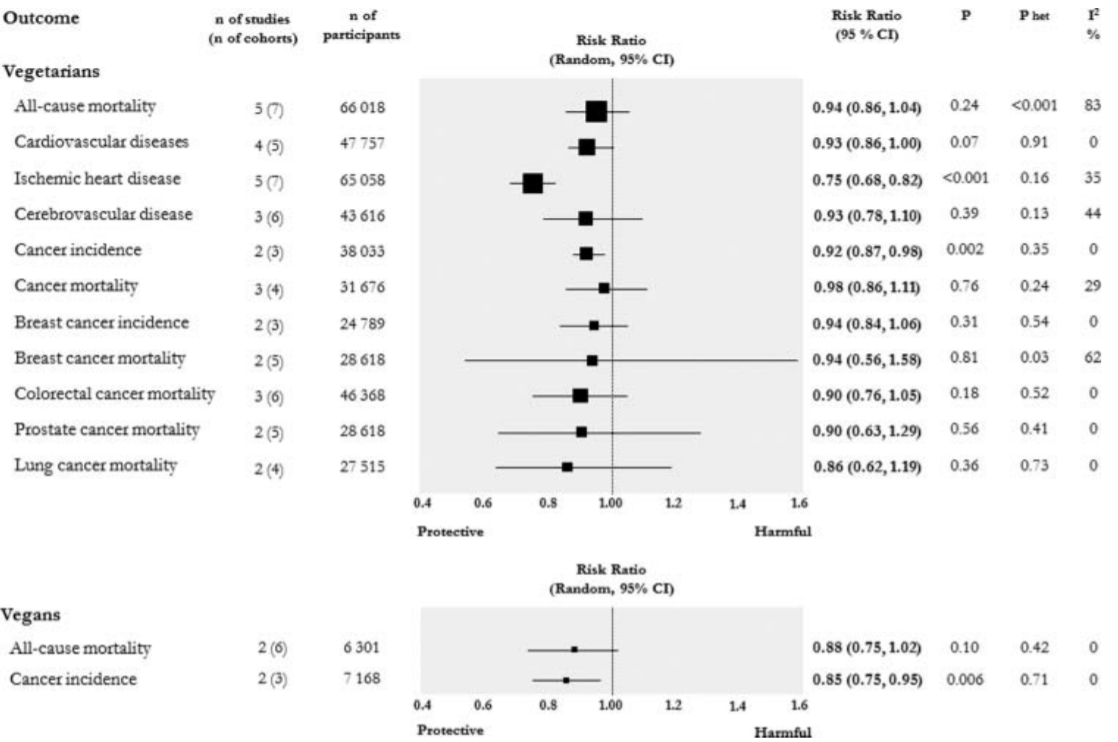 Figure 2. Forest plot summary of all-cause mortality, incidence and mortality from cardio-cerebrovascular diseases, total cancer, and specific type of cancer. P value is for Z test of no overall association between exposure and outcome; P het is for test of no differences in association measure among studies; I 2 estimates from heterogeneity rather than sampling error.

Summary EPIC-Oxford 2016 (United Kingdom):
Vegans who did not change their diet during the study period on average had the same risk of death before age 90 (all causes of death combined), compared to the (relatively health-conscious) non-vegetarians in this study (0% difference in risk).

The vegans in this study on average showed a higher risk (50% higher) of death from stroke - but this result was not statistically significant. What this means is that from these data we cannot know whether vegans' real risk of death from stroke is higher, or actually lower, compared to non-vegetarians.

Note: Many of the vegans in the EPIC-Oxford study consumed too little vitamin B12 (see here).

"TABLE 4
Number of deaths before age 90 y and HRs (95% CIs) by diet group for common causes of death, showing separate results for vegetarians and vegans1 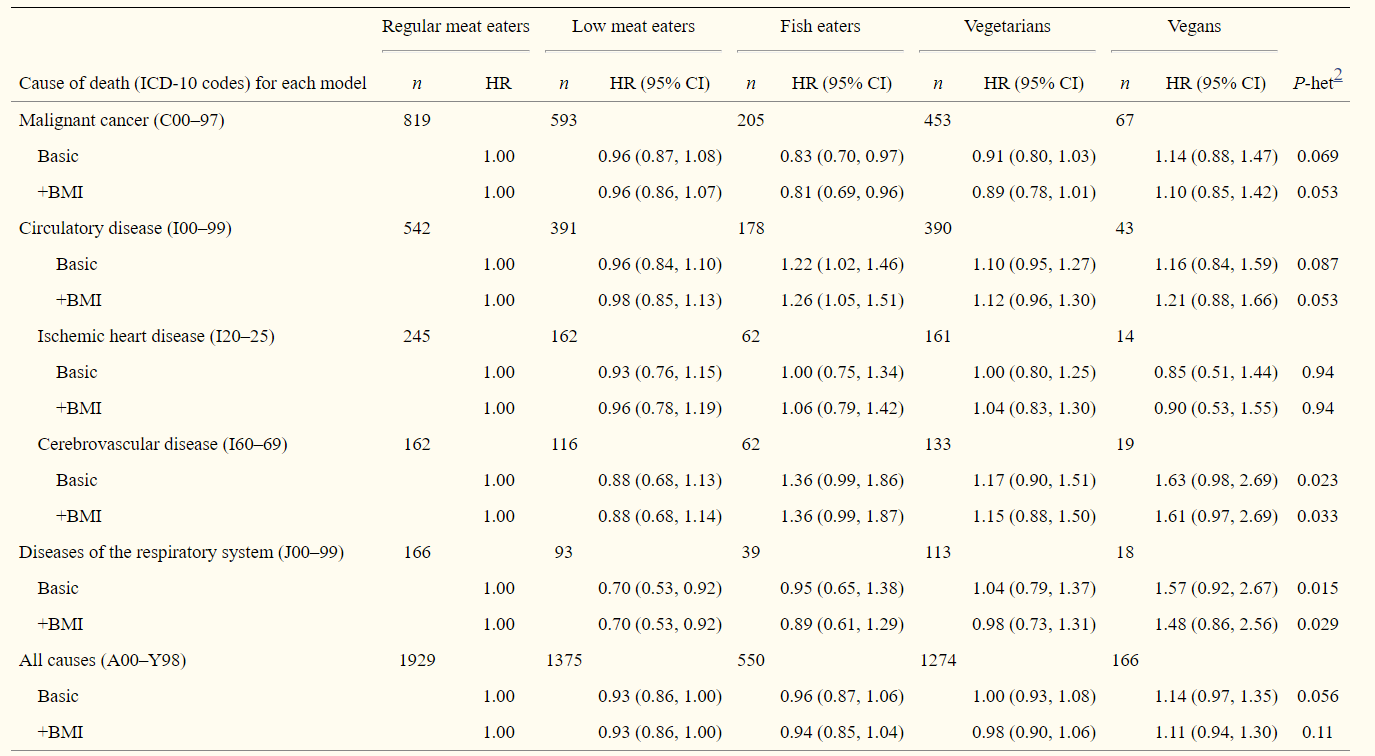 1Estimated by Cox proportional hazards regression with age as the underlying time variable. Basic model adjusted for smoking (never smoker; former smoker; current smoker of 1–9, 10–19, or ≥20 cigarettes per day; other current smoker; unknown); alcohol consumption (<1, 1–7, 8–15, or ≥16 g ethanol/d or unknown); physical activity (low, high, or unknown); whether married or cohabiting (yes, no, or unknown); and regular use of nutritional supplements (no, yes, or unknown), and stratified by study/method of recruitment (Oxford Vegetarian Study, EPIC-Oxford postal, or EPIC-Oxford general practice); all possible combinations of sex, parity (nulliparous, parous, or unknown), oral contraceptive use, and hormone therapy use (both ever, never, or unknown); prior diabetes; prior high blood pressure; and receipt of long-term medical treatment (each no, yes, or unknown), with the use of separate models for each endpoint. Model +BMI is further adjusted for BMI (in kg/m2; <18, 18.0–19.9, 20.0–21.9, 22.0–23.9, 24.0–25.9, 26.0–27.9, 28.0–29.9, 30.0–32.4, or ≥32.5, or unknown). EPIC-Oxford, European Prospective Investigation into Cancer and Nutrition–Oxford; het, heterogeneity; ICD, International Classification of Diseases.
2Chi-square test of heterogeneity of risk between the 5 diet groups."

"Mean reported duration of adherence to current dietary pattern [...] was 21 years for vegans."

Speculation: The reason for the better life expectancy of vegans in this study was quite possibly that they consumed enough vitamin B12 and had a healthier diet in general (more fruits, vegetables, nuts, legumes, and/or whole grains). 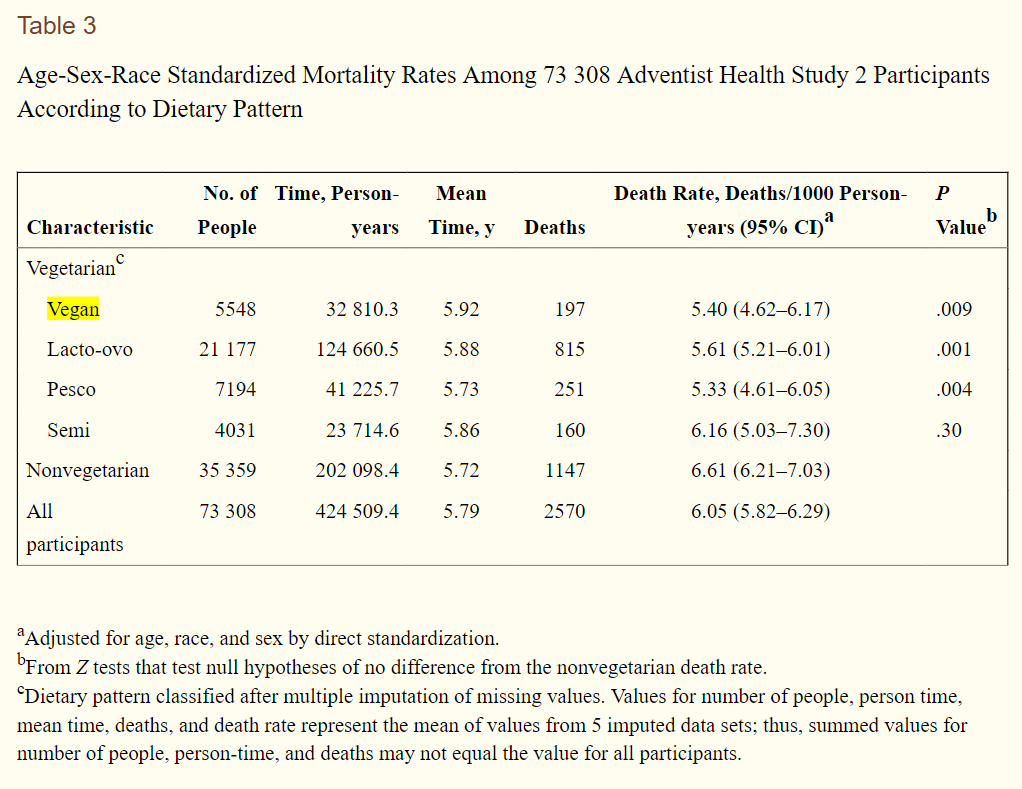 "Table 4
Associations of Dietary Patterns With All-Cause and Cause-Specific Mortality From a Cox Proportional Hazards Regression Model Among Participants in the Adventist Health Study 2, 2002–2009 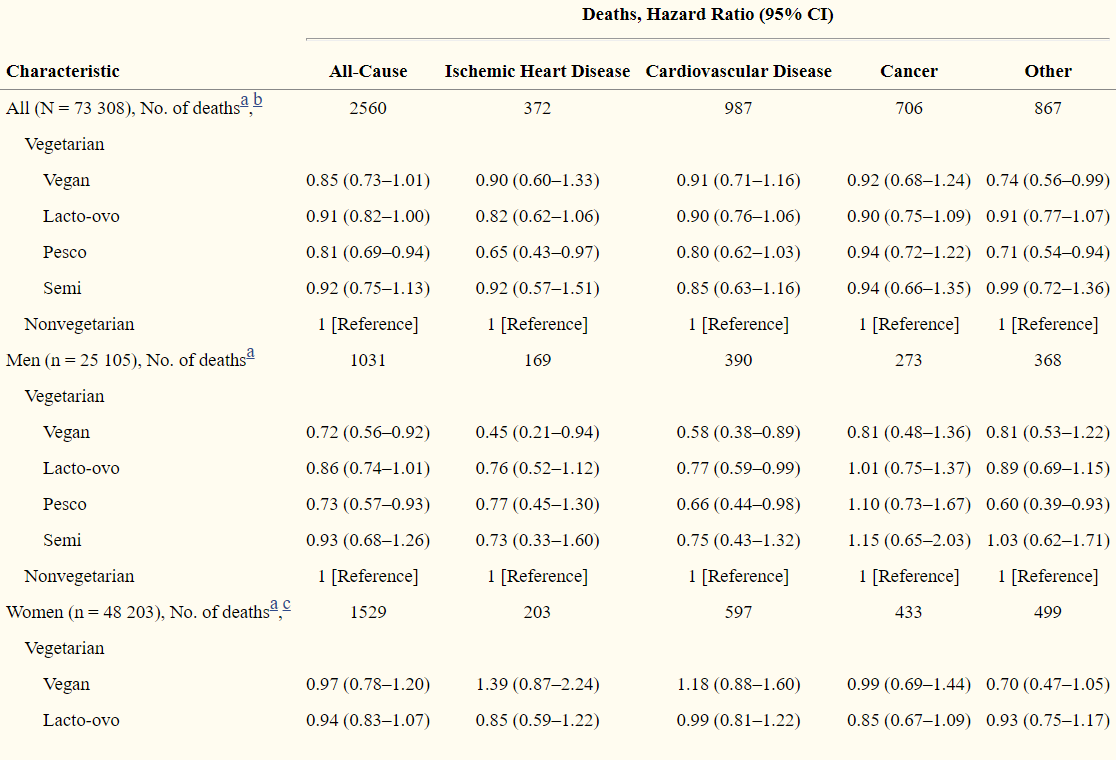 
Another smaller study, with much fewer vegans, has looked at vegans' life expectancy.

Number of vegans in this study: 60

Summary of the Heidelberg Vegetarian Study (Germany):
The vegans in this study had a 59% higher risk of early death compared to the non-vegetarians (who were semi-vegetarians; very low meat consumption) - but this result was not statistically significant.

Note: These vegans were recruited in 1978, and only then were they asked about their diet. So, the "vegans" were "people who were vegan in 1978". The study went from 1978 to 1999. So, it includes all the deaths that occurred in this time period.
There is no info on vitamin B12 intake in these vegans. But it is very likely that many of these vegans (or all) were deficient in vitamin B12. Speaking from personal experience as a German vegan who became vegan in 1997, there was insufficient information available in Germany regarding vitamin B12 for vegans until well into the 2000s.
(Nerd info: See my German translation of Stephen Walsh's "What every vegan should know about vitamin B12" here; I had already tried to circulate this translation on vegan internet forums from around 2006/2007, and back then this type of information was rare/possibly otherwise non-existent. Stephen Walsh's text was the basis of current B12 recommendations for vegans - which have pretty much stayed the same since. To the best of my knowledge there were no precise vitamin B12 recommendations for vegans of this kind available in German before this translation of Stephen Walsh's "What every vegan should know ...". In 2008 the Vegan Society (UK) also produced printed booklets and PDFs of translations in several languages of their "Plant Based Nutrition" booklet which was a summary of Stephen Walsh's book "Plant Based Nutrition". The German version of the "Plant Based Nutrition" booklet/brochure - which you can see here - was a slightly eccentric mix of my translation and another German's translation (whom I don't know). This German booklet was distributed, personally by Stephen Walsh and Vanessa Clarke, at the IVU congress in Dresden in 2008.)
Another interesting finding in the Heidelberg Vegetarian Study was that eating fish more than once a month (!) increased (!) the risk of heart disease (see the table 4 "Meat and fish consumption ..." from this study below).

Speculation: The likely deficiency in vitamin B12 was possibly one important factor in the lower (though not statistically significant) life expectancy in the vegans/"vegans" in this study. It could also be that some of these vegans were people who, for example, became fruitarians later on, or went back to eating meat, or who were not feeling healthy in 1978 and ended up trying out different diets and remedies in this time period.

"Participants were categorized according to their response regarding dietary habits at the time point of enrollment. The study participants were classified into vegan (those who avoid meat, fish, eggs, and dairy products), lacto-ovo vegetarian (those who avoid meat and fish but eat eggs and/or dairy products), and nonvegetarian (those who occasionally or regularly eat meat and/or fish). In previous reports, we used the term ‘‘moderate vegetarians’’ instead of nonvegetarians but included also those who did not strictly avoid but seldom ate meat or fish. Self-reported height and weight were used to calculate body mass index (BMI, kg/m2). Physical activity was analyzed using the self-evaluation of the participants on a three-level scale. The vital status of the study participants by December 31, 1999 was requested from the Registrar’s Office at the last documented place of residence. Copies of the death certificates were obtained from the public health office in charge. The underlying cause of death was coded by a trained nosologist according to the ninth revision of the International Classification of Diseases and Causes of Death. The mortality analysis included all deaths occurring in the cohort until December 31, 1999."
"We also tested for possible differences between a vegan and a lactoovo vegetarian diet, although there were only 60 vegans and 23 deaths in this group. Being a vegan was associated with a higher mortality risk (1.59; 95% CI, 0.98-2.59) [NOT STATISTICALLY SIGNIFICANT] than being a lacto-ovo vegetarian (1.08; 95% CI, 0.86-1.34), when compared with nonvegetarians with moderate meat/ fish consumption, accounting for all other variables (data not shown)." 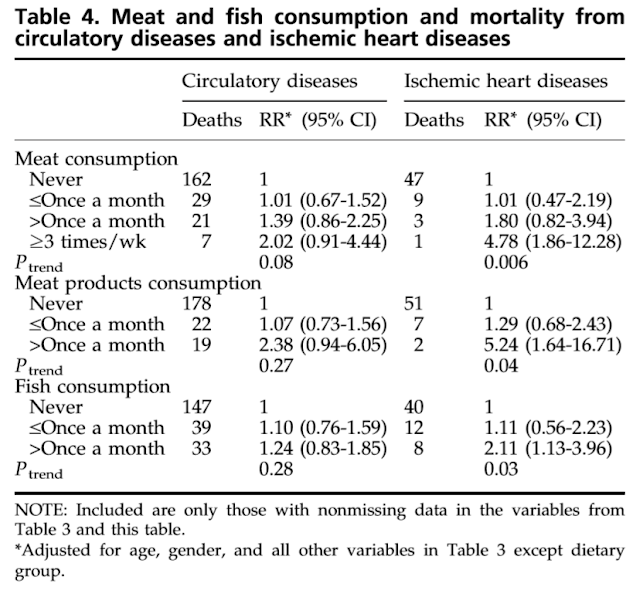 
An older meta-analysis (1999) of 5 studies, including the Heidelberg Vegetarian Study, also looked at vegans' life expectancy.

Number of vegans in this study: 753


Number of vegetarians who did not consume dairy (including the 753 vegans): 1146

Summary of the 1999 Meta-analysis by Key et al. (USA, UK, Germany):
The vegans in this analysis had a 26% lower risk of death from heart attack compared to (the relatively health-conscious) non-vegetarians. Vegans' risk of death from all causes combined was no different from non-vegetarians (0% difference.) Vegans in this analysis had a higher risk of death from stomach cancer and lung cancer - but this was not statistically significant and was based on only two deaths each from stomach and lung cancer. So, this could have quite possibly been due to chance - and it is impossible to draw conclusions from this result.

Note: Drinking large amounts of alcohol, eating large amounts of salt-preserved foods, and being overweight or obese seems to increase the risk of stomach cancer. Consuming no grilled/barbecued meat or fish, and no processed meat, and consuming a lot of fruit (maybe especially citrus fruit) might lower the risk of stomach cancer (see here). If you experience regular stomach pain you should see a doctor and get tested for Helicobacter pylori infection in the stomach (this runs in families, and increases stomach cancer risk, but it can easily be treated).

Not smoking and avoiding air pollution (see here), but rather exercising a lot (physical activity), and eating large amounts of fruit, vegetables, and maybe soya can lower the risk of lung cancer (see here).

Speculation: The results were probably influenced by many vegans in these older studies being vitamin B12 deficient.

Statistical gibberish:
"Further categorization of diets showed that, in comparison with regular meat eaters, mortality from ischemic heart disease was 20% lower in occasional meat eaters, 34% lower in people who ate fish but not meat, 34% lower in lactoovovegetarians, and 26% lower in vegans. There were no significant differences between vegetarians and nonvegetarians in mortality from cerebrovascular disease, stomach cancer, colorectal cancer, lung cancer, breast cancer, prostate cancer, or all other causes combined."

"The number of vegans was small (n = 753 subjects, 68 deaths), so the analyses in Table 7 were repeated with the inclusion of data from the Health Food Shoppers Study, making the assumptions that all nonvegetarians were regular meat eaters and that vegetarians who reported that they did not consume dairy products were vegans. This increased the number of vegans to 1146, of whom 165 died before age 90 y. However, the numbers of deaths from individual cancers among vegans remained small (range: 3–8). The death rate ratios for the vegans [IN THIS CASE: VEGETARIANS WHO DID NOT CONSUME DAIRY] compared with the regular meat eaters from the other causes of death were: for ischemic heart disease, 0.89 (95% CI: 0.65, 1.24; NS); for cerebrovascular disease, 0.51 (95% CI: 0.26, 1.00; NS); for other causes, 1.39 (95% CI: 1.12, 1.72; P < 0.01); and for all causes, 1.06 (95% CI: 0.81, 1.38). However, these death rate ratios should be interpreted with caution because of the uncertainty of the dietary classification of subjects in the Health Food Shoppers Study"


"Mortality from ischemic heart disease among the vegans was slightly higher than among the fish eaters and the vegetarians, but the number of vegans was small". [MEANING, THIS DOES NOT ALLOW CLEAR CONCLUSIONS.] 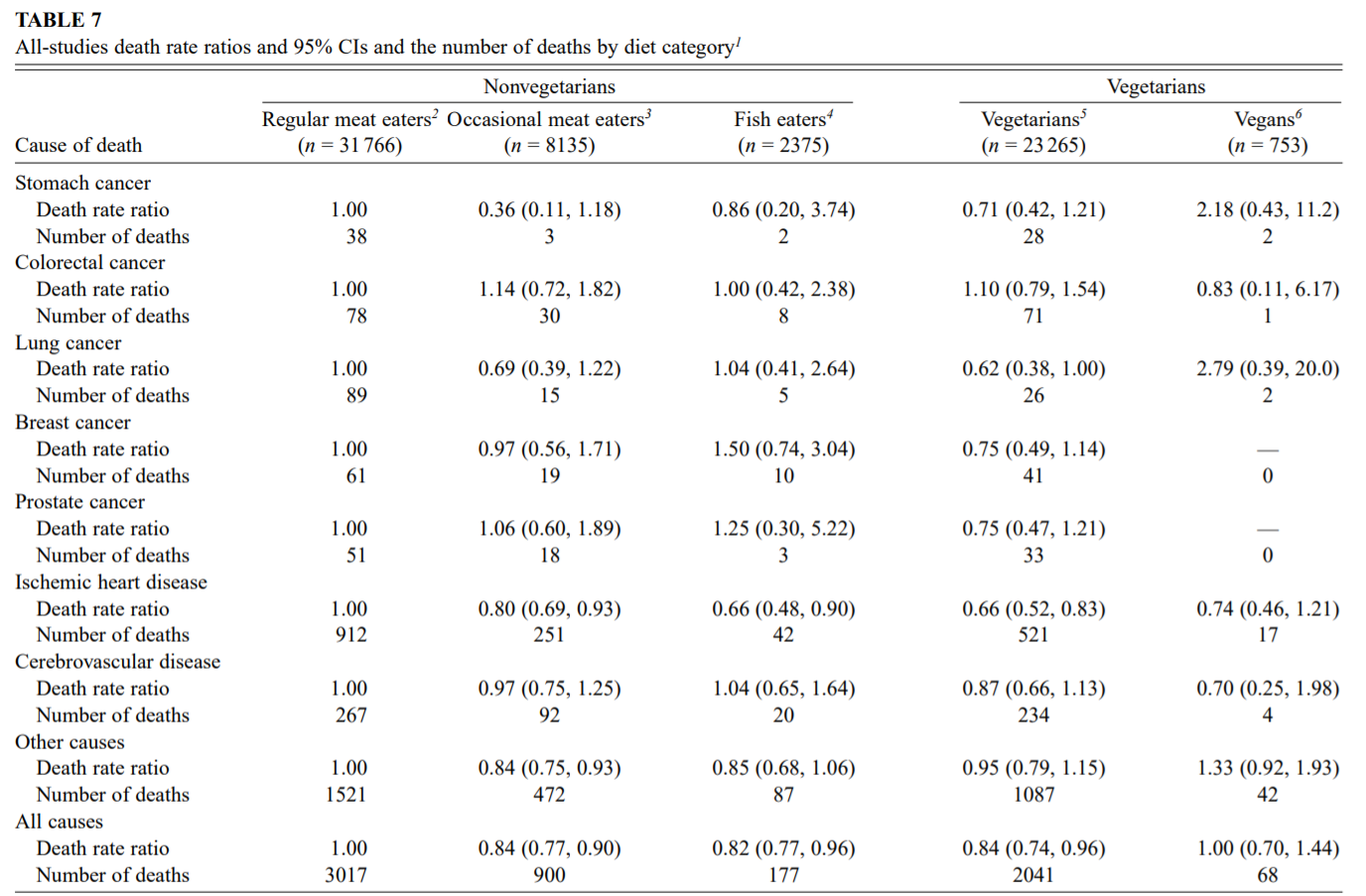 1Adjusted for age, sex, smoking status, and study using a random-effects model. Data from the Health Food Shoppers study (2) were excluded because information on fish, egg, and frequency of meat consumption was not collected.
2Reference group (ate meat ≥1 time/wk).
3Ate meat occasionally but < 1 time/wk.
4Never ate meat but did eat fish.
5Ate dairy products, eggs, or both.
6Did not eat any animal products"