Quick note: EAT-Lancet – what you should know


The super famous (and a bit controversy-prone) medical journal The Lancet has teamed up with “the world's most famous nutritionist”, Walter Willett from Harvard University, and a whole pack of capable scientists to create a new project called “EAT-Lancet”.

Note that “plant-based” does not have to mean vegan. “Plant-based” means a “largely plant-based” or a “diet made up of mostly plant foods” – so this would typically be a flexitarian diet – but it could also be a vegetarian or a vegan diet.

Their website states:
“What is the “planetary health diet”? [the kind of diet that EAT-Lancet recommends]
The planetary health diet is a global reference diet for adults that is symbolically represented by half a plate of fruits, vegetables and nuts. The other half consists of primarily whole grains, plant proteins (beans, lentils, pulses), unsaturated plant oils, modest amounts of meat and dairy, and some added sugars and starchy vegetables. The diet is quite flexible and allows for adaptation to dietary needs, personal preferences and cultural traditions. Vegetarian and vegan diets are two healthy options within the planet health diet but are personal choices.”

What is the “EAT-Lancet commission”?
Their website states: “The EAT-Lancet Commission on Food, Planet, Health brings together more than 30 world-leading scientists from across the globe to reach a scientific consensus that defines a healthy and sustainable diet.”

Please find the most interesting and relevant (I think so) infographics and statements from EAT-Lancet’s new report (called the “EAT-Lancet Commission Summary Report”, English PDF) summarized below. This summary report is also available in several other languages, namely in Arabic, Standard Chinese, French, Indonesian, Portuguese, Russian and Spanish!

(There is also a “full report”, named Food in the Anthropocene: the EAT–Lancet Commission on healthy diets from sustainable food systems (Walter Willett et al.).)

The following information is from the “summary report”:

“Transformation to healthy diets by 2050 will require substantial dietary shifts. Global consumption of fruits, vegetables, nuts and legumes will have to double, and consumption of foods such as red meat and sugar will have to be reduced by more than 50%. A diet rich in plant-based foods and with fewer animal source foods confers both improved health and environmental benefits.”

“Target 1
Healthy Diets
A healthy diet should optimize health, defined broadly as being a state of complete physical, mental and
social well-being and not merely the absence of disease. Scientific targets for healthy diets are based on
the extensive literature on foods, dietary patterns and health outcomes (see Table 1).” 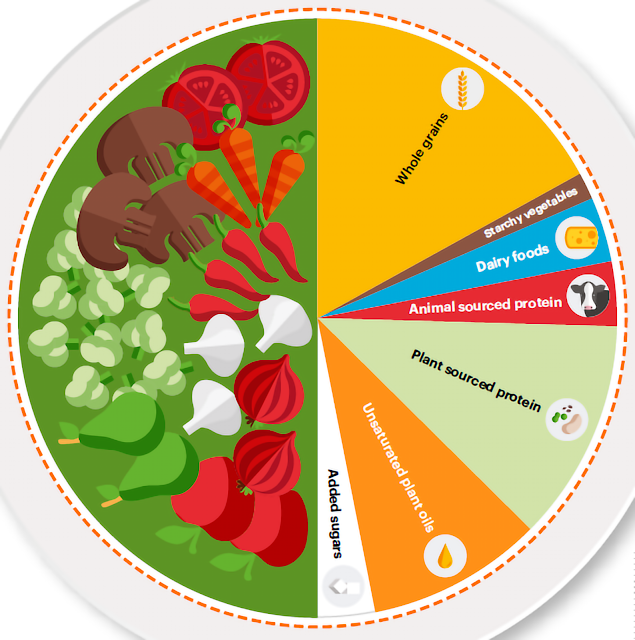 “Figure 3
A planetary health plate should consist by volume of approximately half a plate of vegetables and fruits; the other half, displayed by contribution to calories [! … this means even less animal source foods than shown], should consist of primarily whole grains, plant protein sources [legumes, nuts and seeds], unsaturated plant oils [not palm, palm fruit or coconut oil], and (optionally [!!!]) modest amounts of animal sources of protein.” 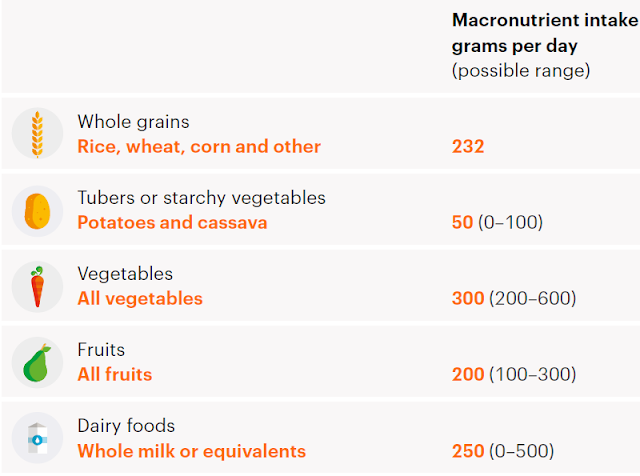 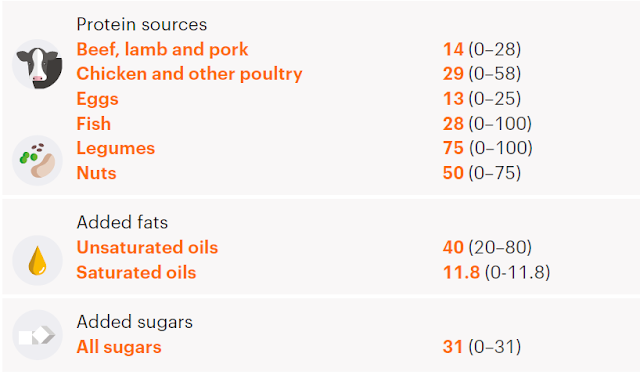 “[…] planetary health diet. This is a flexitarian diet [or a vegetarian or vegan diet, as their website states, see above, or see the “full report”], which is largely plant-based but can optionally [!!!] include modest amounts of fish, meat and dairy foods.” [no mention of eggs, but see below] 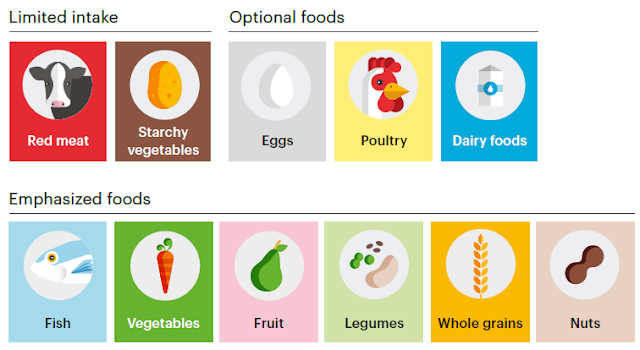 "Figure 4"
[Note: We do not need to eat fish. We can obtain omega-3 fatty acids from plant foods, see here, or see the “full report”.]

“Our vision: A fair and sustainable global food system […].”

What the EAT-Lancet commission and their report is missing:
EAT-Lancet focuses on two dimensions of sustainability: human health and environmental protection. But this is not enough. A sustainable food system also needs to consider economic sustainability as well as ethical considerations. EAT-Lancet is fully aware of this. The summary report states:
“The Commission acknowledges that food systems have environmental impacts along the entire supply chain from production to processing and retail, and furthermore reach beyond human and environmental health by also affecting society, culture, economy, and animal health and welfare [!!!]. However, given the breadth and depth of each of these topics, it was necessary to place many important issues outside the scope of the Commission.”

Maybe the biggest and most urgent question that remains “outside the scope” of EAT-Lancet is: How can slaughterhouses be “fair”? How can all the other practices that nonhuman animals in the food system go through – like castration, debeaking, etc. – be considered “fair”? How can killing animals for food – food we do not need, as we can be vegans – be justified ethically?

The “full report” (not the “summary report”) states: “These findings suggest that a shift towards a dietary pattern emphasising whole grains, fruits, vegetables, nuts, and legumes without necessarily becoming a strict vegan, will be beneficial.”

If a lot of people, followed this advice – without increasing their consumption of fish or chicken – that would also be a big step forward for animals who are killed for food.

P.S.: The “full report gives a more precise idea of what a healthy and environmentally sustainable diet should look like:

“Summary of evidence describing healthy diets
Evidence from controlled feeding studies with intermediate risk factors as outcomes, long-term observational studies relating individual dietary components and overall dietary patterns to major disease endpoints and quality of life, and randomised clinical trials supports the conclusion, with a high level of certainty, that dietary patterns with the following characteristics promote low risk of major chronic disease and overall wellbeing:
(1) protein sources primarily from plants, including soy foods, other legumes, and nuts, fish or alternative
sources [!!!] of omega-3 fatty acids several times per week with optional [!!!] modest consumption of poultry and eggs, and low intakes of red meat, if any, especially processed meat; (2) fat mostly from unsaturated plant sources, with low intakes of saturated fats, and no partly hydrogenated oils; (3) carbohydrates primarily from whole grains with low intake of refined grains and less than 5% of energy
from sugar; (4) at least five servings of fruits and vegetables per day, not including potatoes; and
(5) moderate dairy consumption as an option [!!!]. These elements of a healthy diet allow great flexibility
because they are compatible with a wide variety of foods, agricultural systems, cultural traditions, and individual dietary preferences. These elements can be combined in various types of omnivore, vegetarian, and vegan diets.”

If interested in EAT-Lancet check out this video.
Excerpt: