Quick note: What does the word "vegetarian" mean?

Short summary: If a food is "vegetarian" that means that this food does not include any body parts of any type of animal. A vegetarian person therefore is someone who does not eat any foods that are body parts of animals - usually this means "flesh foods", i.e. the muscle tissue of animals such as fish, cattle ("beef"), pigs ("pork"), goats, "sheep", chickens, turkeys, ducks, geese ("poultry"), rabbits, squids, etc. The term "meat" is not precise as many people tend to include or exclude for example fishes ("fish") in its definition.

There is some confusion about what the definition of "vegetarian" is. This confusion is highly prevalent amongthe general public, but also among self-described "vegetarians", and even among nutritional scientists. So, if you, too, are confused, don't be sad! You are in good - but confused - company.

The definition of a "vegetarian" person:
A vegetarian is a person who does not eat any "flesh foods", i.e. foods made from the flesh of animals - this includes all types of meats and sausages, all types of fishes and all types of other animals (including insects, turtles, snakes, shrimps, mussels, and all other animals).
But to be precise, it is not just about "flesh". Blood and bones are not flesh (muscle tissue). One can argue that skin is not flesh either - "flesh", too has various definitions - but clearly, eating the skin or bones or consuming the blood of any animal cannot be considered vegetarian either.

Rule of thumb for vegetarian persons: If it is a body part of an animal, and you eat it, you are not a vegetarian (no judgment included - this is about a definition, not about moral judgment).

Rule of thumb for people with a short attention span: Vegetarians do not eat animals.

But who has the right to define what "vegetarian" means?
Technically, everybody can decide for themselves, but if everybody decides the meaning of words themselves that will make communication difficult.

Generally speaking, I would suggest vegetarians should decide what vegetarianism is, rather than non-vegetarians deciding. The Vegetarian Society in the United Kingdom supplies a useful definition: 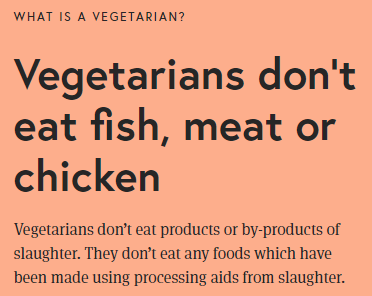 The European Vegetarian Union in May 2018 reported the definition of "vegetarian" by Food Drink Europe (FDE) - a definition meant for use in future legislation.

"Proposed definition (translation by EVU) The following proposed definition has been adopted by the German consumer protection minister conference (see above) and approved by FDE. The EVU sees the requirements depicted above as fully implemented in this wording and suggests to use it for further discussions.
(1) Food suitable for vegans
Foods that are not products of animal origin and in which, at no stage of production and processing, use has been made of or the food has been supplemented with
- ingredients (including additives, carriers, flavourings and enzymes), or
- processing aids, or
- substances which are not food additives but are used in the same way and with the same purpose as processing aids, that are of animal origin.

(2) Food suitable for vegetarians
Foods which meet the requirements of paragraph 1 with the difference that in their production and processing
1. Milk and dairy products,
2. Colostrum,
3. Eggs (No. 5 of Annex I to Regulation (EC) No. 853/2004),
4. Honey (Annex I to Directive 2001/110/EC),
5. Beeswax,
6. Propolis, or
7. Wool grease including lanolin derived from the wool of living sheep or their components or derivatives may be added or used." (European Vegetarian Union, May 2018, checked 23 March 2019)

Definition of "vegetarian" by the Oxford Dictionary of English (United Kingdom):
Vegetarian: "A person who does not eat meat or fish, and sometimes other animal products, especially for moral, religious, or health reasons."
"Origin
Mid 19th century: formed irregularly from vegetable [as in "of plant origin"] + -arian." [This is correct. The word "vegetarian" does not originally come from the Latin "vegetus" - this was an early, but later idea, that was then widely repeated.] (English Oxford Living Dictionaries website, checked 23 March 2019)

The German dictionary "Duden" (the quasi-official dictionary of the German language) gets it a little wrong. The Duden states:
Vegetarian (noun):
"jemand, der sich [vorwiegend] von pflanzlicher Kost ernährt" This means: "someone who follows a diet [predominantly] of plant origin".
Someone who follows such a diet follows a plant-based diet, which might include meat. So this is not at all a correct definition of "vegetarian". (Duden website, checked 23 March 2019)

In their publications the EPIC-Oxford researchers generally use the "correct" (precise) definition of "vegetarian" (see table below). In contrast, the AHS-2 researchers tend to use somewhat incorrect definitions - but for the purpose of studying the effects of vegetarian diets these definition are quite useful: The AHS-2 researchers, for the purposes of their study, define "mostly vegetarian" as "vegetarian" and "mostly vegan" as "vegan" (see table below - please click on the table or open it in a new tab to see the full size image).

For those who are really interested here are some quotes from recent EPIC-Oxford as well as AHS-2 publications, that show how vegetarianism is defined by these researchers:

EPIC-Oxford: “Vegetarians, who do not eat any meat, poultry or fish, constitute a significant minority of the world’s population. Lacto-ovo-vegetarians consume dairy products and/or eggs, whereas vegans do not eat any foods derived wholly or partly from animals” [This is a correct definition of “vegetarian”.]

EPIC-Oxford: “[…] vegetarians (who do not eat meat or fish but do eat dairy products and/or eggs)” [This is a definition of “ovo-lacto-vegetarian”.]

EPIC-Oxford: “[…] vegetarian diet (containing no meat or fish)
[…]
Participants were also asked whether they ate meat, fish, eggs or dairy products, and, where appropriate, the ages at which they stopped eating these foods, and were categorised as vegetarian if they did not eat meat or fish at the time of questionnaire response.” [This is a correct definition of “vegetarian”.]

EPIC-Oxford: “[…] vegetarians (ate no meat or fish, including vegans[)]” [This is a correct definition of “vegetarian”.]