How some GMOs will save animals - Part 1: Plant-based GMO long-chain omega-3 fatty acids 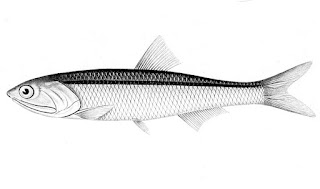 A short while ago I came across a very informative article by scientists from the University of Stirling in Scotland. Bite-sized portions below, for your convenience:

EPA and DHA usually come from sea fish and practically do not occur in vegan foods – the exception are microalgae oil-based EPA- and/or DHA-supplements, or foods fortified with this type of microalgae oil.


Omega-3 need and omega-3 want
Whether humans, or vegans in particular, need or would benefit from consuming EPA and/or DHA directly, is another question. The answer is quite unclear based on current evidence.
The fact is that a lot of people want to eat fish. And for many people the predominant reason for wanting to eat and for eating sea fish is not that they love the taste experience that it brings them, but that they want to obtain the above mentioned big sized (long-chain) omega-3 fatty acids (EPA and DHA) from it.


Omega-3 problems
Problem 1, animal ethics: Fish can likely feel pain and suffer. Many many many fish are caught.
Problem 2, environmental sustainability: There aren’t enough omega-3-rich fish in the ocean for all humans to eat as much as they would like (or are told to).

Until now?
Omega-3 solutions
Solution 1: Everybody go vegan – I would prefer and vote for this one. Vegans can happily eat enough ALA from plant sources (see above) and can easily make enough EPA from the ALA they eat. Whether vegans will or would benefit from consuming DHA directly … I have no idea. Possibly not. Clearly, the solution, should we find out one day that all vegans should consume DHA, would be to produce more DHA-rich microalgae oil and foods fortified with it. Solution 1 would “solve” both problems 1 and 2 (i.e. improve things a lot, not solve them completely).
Solution 2, the more common approach: Problem 1 (fish suffer) is ignored. Problem 2 (not enough fish in the ocean to keep fishing destructo-style forever) is being addressed by many scientists. Aquaculture of fish seems to be something like a solution, but the problem is, aquaculture needs even more fish. So what we need … even if we are going to keep ignoring that fish can suffer … is an environmentally sustainable, plant-based source of the big (long-chain) omega-3s (in science speak: n-3 LC-PUFA).

21st century solutions:
“For two decades there has been considerable research carried out into all possible alternatives to the main sources of n-3 LC-PUFA, marine fish oil and fishmeal, driven largely by the aquaculture sector, as both the major user and provider of EPA and DHA.” (Tocher et al. 2019)

So what are the alternatives?
- vegan EPA/DHA-producing microalgae (= much larger quantities than currently produced – problem: It’s difficult to make that much.) “This technology is scalable but limited mainly by the capex [capital expenditure = spending money] required to produce very large biofermentor facilities.” (Tocher et al. 2019)
- vegan EPA/DHA-producing GMO plants, i.e. taking the respective genes from the above microalgae and “putting” them into oil crops (plants used to make edible plant oils)

“In the last few years these efforts have focused increasingly on the development of entirely new supplies of n-3 LC-PUFA produced de novo [= engineering plants that do not produce n-3 LC-PUFA to make them – and “engineering” in this case means … don’t scream … making GMOs]. Recently, this has resulted in various new sources of EPA and/or DHA that are already available or likely to available in the near future. […] We conclude that all the new sources have potentially important roles to play in increasing the supply of n-3 LC-PUFA so that they [these GMO plants] are available more widely and in higher concentrations providing more options and opportunities for human consumers […]” (Tocher et al. 2019).

Now … “The Fundamental Solution” (Tocher et al. 2019)
“It is clear that we require entirely new (de novo) supplies of EPA and DHA and this, in turn, requires completely different approaches. In other words, we must generate the EPA and DHA that we require, rather than simply recycle it. One approach has been to apply modern technology to “farm” the marine organisms (i.e., the microalgae) that make the EPA and DHA in the first place. While feasible, this option has required advances in industrial technologies to enable scale-up of fermentation of heterotrophic species and/or bioreactor-like culture of phototrophic species. A second approach has been to use 21st century molecular technologies to utilise the microalgal genes for the production of EPA and DHA in a well-established, efficient oil-producing platform, oilseed crops.” (Tocher et al. 2019)

So what’s the plan?
“While none of the GM oilseed oils are yet fully commercialised both the groups involved in developing GM canola are actively seeking approval for planting of the elite canola events they wish to commercialise through the publication in the USA of the USDA Animal and Plant Health Inspection Service (APHIS) “Petition for non-regulatory status” (Tocher et al. 2019).

So what’s the problem with these GMOs? And what’s “The Future”?
“[…] socio-economic and socio-political issues. While the microalgal products [vegan microalgae oil] may have price implications associated with the relatively high cost of production, GM-derived oils have issues associated with consumer perception and acceptance in some countries, especially in the EU, as well as the hurdle of regulatory approval.” (Tocher et al. 2019) “[…] ‘commercial demand’ […] includes demand from the direct human consumption (capsule) market, as well as potential future demand from other animal feed (poultry and pig) sectors, but the main driver will likely continue to be the aquaculture [fish farming] sector.” (Tocher et al. 2019)

But, before you will get too enthusiastic: Making more vegan big size (long-chain) omega-3s doesn’t in every single case mean that less fish will suffer. Because omega-3 levels in farmed fish have been going down, so to make them come up again it would be necessary to add in more omega-3s into the fish feed than before. “This would mean using the new sources [GMO omega-3s] not to replace some of the fish oil, but to replace the vegetable oil currently [also] used in [fish] feeds.” (Tocher et al. 2019) 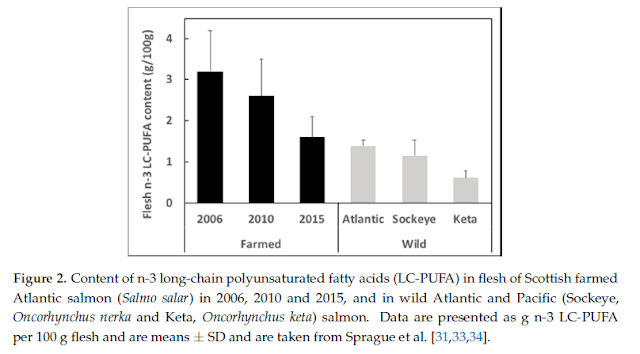 [For high-fat fish species] like salmon to deliver [a] high dose it requires high levels of EPA+DHA in the feed. This will not be possible with microalgal biomasses that cannot be incorporated into the feeds of salmonids, or marine fish, at the required high levels due to the presence in the biomasses of substantial amounts of carbohydrates that, irrespective of the exact type of carbohydrate, have very low nutritional value in carnivorous fish species with limited ability to utilise dietary carbohydrate of any type.” (Tocher et al. 2019)

“As alluded to above, microalgal biomasses can be included in feeds for carnivorous species to only a limited extent, at least partly due to the carbohydrate content that is relatively high […]” (Tocher et al. 2019).

“The high EPA+DHA oils such as the microalgal oil, Veramaris®, and the oil from genetically engineered Camelina, would be ideal for improving the n-3 LC-PUFA content of oily species such as the salmonids, especially salmon […].” (Tocher et al. 2019)

And back to humans:
“Supplementation of other food groups with EPA and DHA is also a possible option especially after microencapsulation, and has been used with milk, cheese, yoghurt [or vegan versions], bread and juice.” (Tocher et al. 2019)

So, what’s the overall conclusion?
“The overall conclusion is that all the new sources [vegan microalgae oil and vegan GMO oil crops] can have important roles to play in helping to support healthy, balanced diets for people [and reducing animal suffering]. The variety of new sources of EPA and DHA coming to market will be highly beneficial as they can be targeted to different uses and, as they all find their niche markets, this could help to draw down prices making their widespread use increasingly feasible.” (Tocher et al. 2019)
Hallelujah!

Update 13 April 2019:
“These findings show that incorporation into blood lipids of EPA and DHA consumed as CSO [transgenic Camelina sativa seed oil] was equivalent to BFO [commercial blended fish oil] and that such transgenic plant oils are a suitable dietary source of EPA and DHA in humans.” (West et al. 2019)