With historically very early vegans (i.e. pre-1940s) one of the big questions that comes up is: Where did they get their vitamin B12? The likely answer, I suspect, is that they were not strictly vegan but rather followed a more or less vegan ovo-lacto-vegetarian or other type of plant-based diet. In any case, Al-Ma’arri who lived in Syria (and what is now Lebanon, Turkey and Iraq) around 1000 A.D. (common era) and who is a widely celebrated writer was the earliest of all early "vegans" (semi-vegans) - the earliest I know of. His endorsement of vegan ideas and ideals and of a vegan lifestyle already one thousand years ago are astonishing and applaudable.

The following lines have been widely quoted in the "vegan movement" in recent years, but I recently came across the original Arabic together with the English translation ... and I thought someone somewhere (Arabic-speaking world) might end up finding it useful. Note that Al-Ma’arri was also a staunch critic of religion and quite pessimistic about life in general, so you might want to be careful to whom you will cite his writings. Original Arabic: 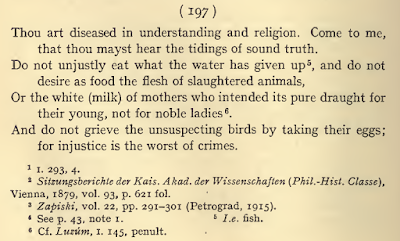 "Do not unjustly eat what the water has given up [fish] and do not desire as food the flesh of slaughtered animals,
Or the white (milk) of mothers who intended its pure draught for their young, not noble ladies.
And do not grieve the unsuspecting birds by taking their eggs; for injustice is the worst of crimes.
And spare the honey which the bees get betimes by their industry from the flowers of fragrant plants;
For they did not store it that it might belong to others, nor did they gather it for bounty and gifts.
I washed my hands of all this […]."