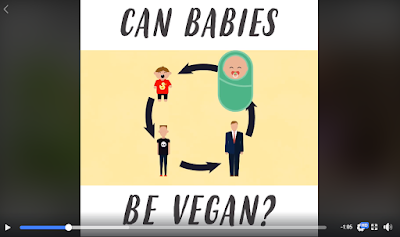 About one week ago the US-American animal advocacy group Mercy for Animals – popular with vegan Hollywood celebrities and pop musicians like Moby – published a one-minute video titled “Can Babies Be Vegan?”.

It is a short video, but it is filled with half-truths – to put it politely. When an organization distributes information that is incorrect (and dangerous) I can see two possible reasons for this:

FIRST POSSIBILITY: The organization doesn’t know that this information is wrong. One might call this “ignorance”.

SECOND POSSIBILITY: The organization knows that this information is wrong but they pretend that it is correct. Anyone would call this “lying”, right?

The following is a complete transcript of this very short video – transcript in blue:

“The American Dietetic Association says vegan diets “are appropriate for individuals during all stages of the life cycle”. That includes babies.”

COMMENT: This indicates that the FIRST POSSIBILITY (see above) is the one that fits here and that Mercy for Animals really did not research the topic at all (?). The American Dietetic Association (ADA) renamed itself Academy of Nutrition and Dietetics (AND) a few years ago (2012). And the AND’s most recent position paper on vegetarian (and vegan) diets is from 2016, and it can be found here. It was written by none other than vegan nutrition pioneer Vesanto Melina and the position paper states:

“It is the position of the Academy of Nutrition and Dietetics that appropriately planned vegetarian, including vegan, diets are healthful, nutritionally adequate, and may provide health benefits for the prevention and treatment of certain diseases. These diets are appropriate for all stages of the life cycle, including pregnancy, lactation, infancy, childhood, adolescence, older adulthood, and for athletes. […] Vegans need reliable sources of vitamin B-12, such as fortified foods or supplements. […]
Vegans must regularly consume reliable sources – meaning B-12-fortified foods or
B-12-containing supplements – or they could become deficient, as shown in case studies of vegan infants, children, and adults.
[…]
Pregnant and Lactating Women
Limited research indicates that where food access is adequate, vegetarian pregnancy outcomes, such as birth weight and pregnancy duration, are similar to those in nonvegetarian pregnancy. Use of a vegetarian diet in the first trimester resulted in lower risk of excessive gestational weight gain in one study. Maternal diets high in plant foods may reduce the risk of complications of pregnancy, such as gestational diabetes. The Academy of Nutrition and Dietetics’ position and practice papers on “Nutrition and Lifestyle for a Healthy Pregnancy Outcome” provide appropriate guidance for pregnant vegetarians. Special consideration is required for iron, zinc, vitamin B-12, and EPA/DHA. Depending on dietary choices, pregnant vegetarians may have higher iron intakes than nonvegetarians and are more likely to use iron supplements. Because of the potential for inadequate
intakes and the adverse effects of iron deficiency, a low-dose (30 mg) iron supplement is recommended in pregnancy. The recommended amount of iron could be provided via a prenatal supplement, a separate iron supplement, or a combination of these.
There is insufficient evidence that zinc intake and status in vegetarian pregnancies differ from nonvegetarian pregnancies. Due to the increased zinc requirements of pregnancy and the lower bioavailability in diets based on high-phytate grains and legumes, increasing zinc intake and using food preparation techniques that improve bioavailability are recommended. Pregnant and lactating vegetarians need regular and adequate dietary and/or supplemental sources of vitamin B-12.
Infants of vegetarian women have lower plasma DHA concentrations and breast milk of vegetarians is lower in DHA. These n-3 fatty acids can be synthesized to some extent from a-linolenic acid, but conversion rates are low (though somewhat enhanced in pregnancy). Pregnant and lactating vegetarians may benefit from direct sources of EPA and DHA derived from microalgae.
Infants, Children, and Adolescents
Exclusive breastfeeding is recommended for the first 6 months. If breastfeeding is not possible, commercial infant formula should be used as the primary beverage for the first year.
Complementary foods [foods after weaning] should be rich in energy, protein, iron, and zinc, and may include hummus, tofu, well-cooked legumes, and mashed avocado. Full fat, fortified soy milk, or dairy milk can be started as early as 1 year of age for toddlers who are growing normally and eating a variety of foods. Vegetarian children and teens are at lower risk than their nonvegetarian peers for overweight and obesity.
[…]
Nutrients that may require attention in the planning of nutritionally adequate diets for young vegetarians include iron, zinc, vitamin B-12, and for some, calcium and vitamin D. […] Vitamin B-12 intake of vegan infants and children should be assessed and fortified foods and/or supplements
used as needed to insure adequacy.” 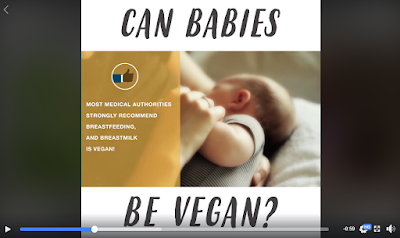 “Once babies are weaned their first foods are usually vegan: fruits, veggies and baby cereal.”
COMMENT: The first foods might typically be vegan but very soon afterwards – typically – meat and fish and possibly eggs are given to the baby. Meat and fish provide protein, iron, zinc, and most importantly vitamin B12. Sea fish also provides iodine. It is very important that extra care is taken that vegan babies receive enough vitamin B12 and iodine.

The American Academy of Pediatrics (AAP) recommends a diet including meat, fish and eggs as their standard recommendation: “Within a few months of starting solid foods, your baby's daily diet should include a variety of foods, such as breast milk, formula, or both; meats; cereal; vegetables; fruits; eggs; and fish.”

The Academy of Nutrition and Dietetics (AND) recommends a diet including meat and fish as their standard recommendation, including “Cooked and pureed meat or poultry” at 6 months of age and including “Well-cooked, minced or finely chopped meat, poultry or fish” at 9 months of age.

Both the AAP and the AND accept well-planned vegan diets for babies though – unlike the most recent document on “weaning foods” (complementary foods) by the World Health Organization (WHO) which is from 2003 and which rejects vegetarian diets for babies. Luckily, no one reads these really long WHO PDFs – except for big decision makers who advice governments and large medical organizations globally. I sincerely hope that the next time the WHO publishes a document on complementary feeding it will include the statement that well-planned and adequately supplemented vegan diets are safe and possibly beneficial for babies. But if large vegan organizations keep contributing to vegan babies suffering from vitamin B12 or iodine deficiencies then that is unlikely to happen.

“Children can get all the nutrients they need including protein, calcium and iron from healthy plant-based foods like beans, grains, fruits, and vegetables.”
COMMENT: This is misleading and dangerous. Vegan babies, or any other vegan, cannot get enough vitamin B12 (or iodine) from beans, grains, fruits or vegetables. Iodine could be obtained from sea vegetables but due to the potentially very high iodine content (toxic) I would not recommend sea vegetables for vegan babies at all.

“Milk and eggs are common allergens for kids, and studies show milk does not help kids grow strong bones.”
COMMENT: This is what the AND writes: “Current evidence does not indicate needing to wait beyond 4 to 6 months before introducing potentially allergy-causing foods such as eggs, dairy, soy, peanuts and fish.”

“Plus, dairy consumption in early childhood is linked to type 1 diabetes.”
COMMENT: The evidence for this is extremely weak (also see here).

“Later in life meat consumption is linked to heart disease, diabetes, cancer, and other diseases while plant-based diets are linked to lower risks of all these illnesses.”
COMMENT: This could be true.

I am convinced that well-planned, adequately fortified vegan diets are excellent for babies and everyone else.

I am also convinced that there have been more than enough cases of severely and mildly vitamin B12 deficient, vitamin D deficient and iodine deficient vegan babies. We know that the first two (B12 and iodine deficiency) can be very dangerous and lead to severe and irreversible brain damage. Vitamin B12 deficiency during pregnancy or in babies can also result in stillbirths and death.

I am also convinced that all vegan children have a moral right to adequate nutrition, and that leaders of vegan organizations who cannot see this should resign today. 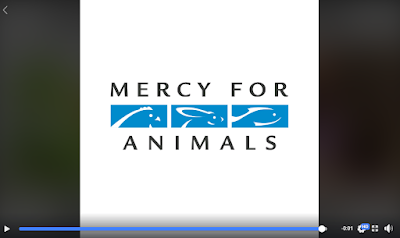 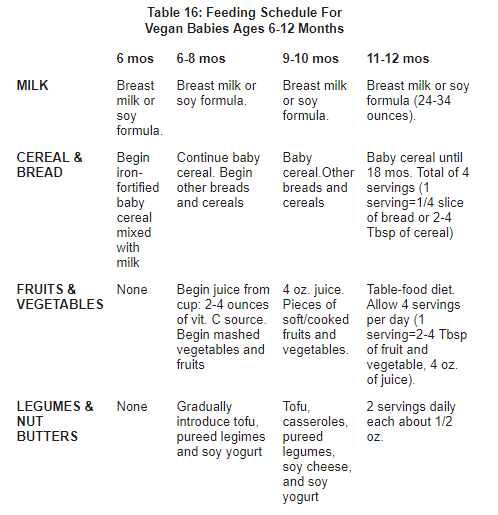