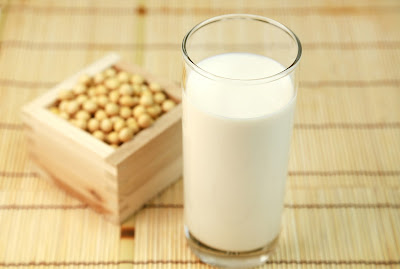 A study by Segovia-Siapco et al. published this year examined if in male teenagers who consume more soya foods than the average American/European there is a connection between soya isoflavone intake and the age at pubarche. “Pubarche” means the age at which pubic hair first appears.

Soya isoflavones (also called isoflavonoids) are a type of polyphenol in soya and they can dock to estrogen receptors (ER) in the body. Both males and females have these receptors. At the ER they can either have a pro-estrogenic effect or an anti-estrogenic effect, or no effect.

High soya consumers had the age of pubarche half a year earlier than low consumers. There was no association of isoflavones with first appearance of facial hair.

Summary:
- male teenagers 12 to 18 years old (n = 248) who attended schools around Seventh Day Adventist universities in Southern California and Michigan
- About 20% of the participants were vegetarians.
- Moderate and high soy consumers had significantly higher proportions of vegetarians.
- self-reported their age at pubarche
- “Participants were asked to recall the age when they first observed growth of pubic hair around their genitals and other secondary sexual characteristics, such as growth of hair on upper lip, chin, or side of face.”
- intake of soy isoflavones was assessed using a validated Web-based food frequency questionnaire
- The teenagers in this study consumed ~1–55 mg of isoflavones per day.
- Soya food intake from “dairy and meat alternatives in the school cafeterias and at home” and possibly other soya foods.
- The study found that those male teenagers who consumed moderate to high amounts of soya foods and therefore soya isoflavones had an earlier age of pubarche than those who ate low amounts of soya foods.
- adjusted median age at pubarche low (<3 mg/d) isoflavone consumers: 13.0 years
- adjusted median age at pubarche moderate (3–20 mg/d) isoflavone consumers: 12.6 years
- adjusted median age at pubarche high (>20 mg/d) isoflavone consumers: 12.5 years
- For all three groups age at pubarche is within the normal reported range for boys’ pubarcheal age.
- No significant association was found between isoflavone intake and first appearance of facial hair.
- “Although timing is very variable for both facial and axillary hair growth, it is estimated that facial hair in boys grows at about the same time as axillary hair, which usually appears about 2 years after pubic hair first occurs” [a very broad generalization, surely]
- “Pubertal timing is thought to be the outcome of the interaction between genetic, endocrine, and environmental factors.” (Segovia-Siapco et al. 2017)

- “Marshall and Tanner [in 1970] approximated the mean (SD) age at pubarche at 13.44 (1.09) but cautioned about possible underestimation of pubarche in boys, since pubic hair appearance may not be readily seen.” (Segovia-Siapco et al. 2017)

What other studies have shown (regarding male sexual development/health and soya intake):

Effects of soya foods on puberty in males:
- The study presented above (Segovia-Siapco et al. 2017) is the only study the potential effects soya intake in the age at pubarche.
- A prospective study from Germany found no association between dietary soya isoflavones and age at the beginning of puberty or other pubertal markers in 108 Caucasian German boys (age: ~ 9 years). The pubertal markers examined were initiation of gonadal growth (“Tanner stage 2”, penis size [probably not measured] and testicle size, “testis volume is determined by palpation using the Prader orchidometer. We have used age at testis volume ≥4 mL to define the onset of gonadal development in boys”) and voice break. But these boys only consumed 0–3 mg/d of soya isoflavones (Cheng et al. 2010).

Effects of soya foods/soya isoflavone supplements on testosterone and other sex hormone levels in male children:
- There is one epidemiologic study on this:
In a cross-sectional study in Japan (Aichi Province, 2006) with 230 boys (age: 3–6 years) soya intake and soya isoflavone intake was associated with lower urinary estrone and estradiol in boys. The high isoflavone consumers in this group of boys consumed ~ 27 mg/d. The median intakes in all boys were from 5–27 mg/d (Wada et al. 2011).
“The clinical implications of the findings from this study, if any, are unclear.” (Messina et al. 2017)
- There is one clinical study on this:
In an 8-week crossover study in Israel that included 4 (!) boys (age: somewhere between 5.3 and 11.2 years) who suffered from high cholesterol levels the boys received placebo or 16 mg or 48 mg/d of isoflavones (supplement). This study showed no effects on serum levels of testosterone, FSH (follicle stimulating hormone) or LH (luteinizing hormone) (Zung et al. 2010).

Effects of soya infant formula sexual development in boys:
Studies with people men who were fed soya formula instead of receiving breast milk have shown:
- In men there is no association between being fed soya formula as an infant with the following reproductive health parameters: adult height, usual weight, education level, pubertal maturation (age at first ejaculation, age when voice changed, age when hair began to grow on chest, face, or pubic area) and pregnancy outcomes in sexual partners impregnated by the male study subjects. Other outcomes, such as congenital malformations in the men’s children, hormonal disorders, testicular cancer in men, and homosexual orientation, were included as secondary outcomes but were not expected to provide definitive results because these events were expected to occur too infrequently.
This study included: 120 males receiving soya infant formula compared to 295 males receiving cow’s milk formula; study from 1999; men’s age: 20–34 years. They had participated during 1965–1978 in controlled feeding studies conducted at the University of Iowa, Iowa City (USA).
The soya infant formula didn’t turn them into vegans either: 0 of the 120 soya formula fed males were vegans as adults, whereas 4 out of 294 cow’s milk formula fed males were vegans. (Strom et al., 2001)
- No association of between being fed soya formula as an infant and reproductive organ volumes – breast bud volume, prostate volume, testicle volume – and testicle position (in the scrotum or undescended) at age 5.
This study compared 32 boys who were breastfed with 28 boys who were fed cow’s milk formula and 38 boys who were fed soya formula. None of the soya formula fed boys had undescended testicles while one boy of each the cow’s milk and the breast milk group had undescended testicles – of course this was not statistically significant and probably due to chance.
The boys in this study took part in the Beginnings Study in Central Arkansas (USA); study period: 2010–2014 (Andres et al. 2015).

Conclusion:
Based on this little evidence really nothing can be concluded -  based on scientific evidence. There is no evidence that soya causes any harm to male teenagers, or other human males. One of the first things to think of when discussing "earlier puberty" is cancer risk. Nothing indicates that soya could raise male specific cancer risk - prostate cancer, testicular cancer, penis cancer, male breast cancer - in any age group.
My personal opinion is that there is nothing to worry about for boys and men regarding soya.
Prostate cancer is one of the most common cancers in men and surely I would love to see more human studies on soya foods and prostate cancer and other male sex specific issues. I would like to see such research because I am egocentric, male, and eat quite a lot of soya, and have a nerdy interest in the issue - but also because men's health and soya are relevant public health issues.