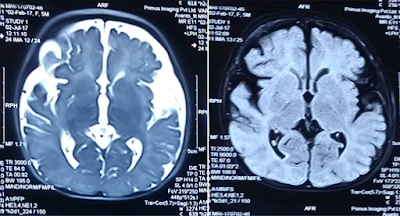 The photo is an MRI of the baby girl’s brain showing atrophy in some parts.

In November 2017 a new case report was published in the Indian Journal of Pediatrics describing a five-month-old female infant with severe vitamin B12 deficiency:

The baby
- showed developmental regression for 20 days before they went to the hospital/doctor (loss of milestones = for example, before, she could sit up, lift her head and wave her hand, then she couldn’t these things anymore).
- showed seizures, jerks and tremors.
- was exclusively breastfed until 4 months of age.
- was lethargic.
- had a very small head circumference.
- showed a regressed developmental age of 4 weeks old, but she was already 5 months old.
- had a blood MMA (methylmalonic acid) level that was elevated 111-fold.
- received intravenous vitamin B12 – after the B12 injections she had no more seizures and regained her milestones (physical and mental abilities) within 4 weeks. And the MMA level dropped.

It seems that after 10 weeks of vitamin B12 injections the MRI results had not normalized in this baby girl (the authors are not very clear about this).

The authors of the article conclude: “Efforts should be directed therefore to preventing deficiency in pregnant and breast feeding women on vegan diets and their infants. […] The complete reversal of symptoms is rewarding for both the parents and the clinician.”

In India vitamin B12 deficiency is very common, especially in vegetarians – see here and here – but also in non-vegetarians. The reason is that many people consume very little vitamin B12. The reason for this is that they neither consume large quantities of meat or dairy nor do they consume “added B12” in the form of vitamin B12 supplements, vitamin B12 containing supplements (like multivitamins) or vitamin B12 fortified foods. Not consuming any meat or dairy is good – for reducing animal suffering and probably for your own health BUT YOU NEED TO SUPPLEMENT VITAMIN B12.

A great solution – in my opinion – would be to fortify flour in India (and everywhere else) with vitamin B12. This would be very cheap and probably effective. In fact, this might happen in the near future – or might already be put into practice by some flour companies in India. According to the Food Fortification Initiative (FFI) “A significant milestone in India took place in October 2016 when the Food Safety Standards Authority of India published draft standards for food fortification. The draft for wheat flour fortification is in line with global fortification recommendations for iron, vitamin B12, and folic acid.” However too little emphasis is being put – also by the FFI – on fortifying flour specifically with vitamin B12. The FFI defines “mandatory fortification” as “Legislation that has the effect of mandating fortification of one or more types of wheat or maize flour or rice with at least iron or folic acid.” Fortification with vitamin B12 is at least as important as adding folic acid and iron – especially in India.

The FFI writes “Flour fortification is supported by the government of India”. This is great – a focus should be on vitamin B12.


The World Health Organization (WHO, 2009) states in their recommendations for flour fortification (2009):
“An unpublished pilot study testing the feasibility of adding B-complex vitamins and iron to flour in Israel showed that vitamin B12 added to flour was stable during baking, did not affect the quality of the bread, and increased plasma B12 concentrations slightly within six months (Allen L et al, 2008). However, evidence is still lacking about the population impact of fortification of wheat flour with vitamin B12 to improve vitamin B12 status. Nevertheless, fortifying flours with vitamin B12 could be a feasible approach to improve vitamin B12 intake and the status of populations as there are no known adverse consequences of vitamin B12 fortification, and there are no known adverse effects of high intakes of the vitamin.”