Lucky number eight! Our family has a new member! 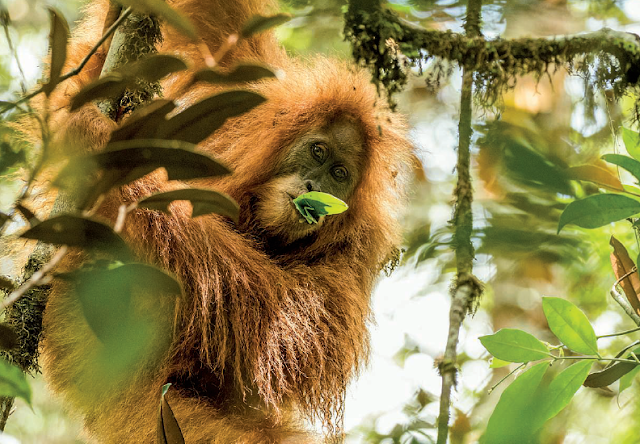 Newly discovered member. Discovered because one of them was killed in a conflict with humans (because of entering a garden). Our new family member is called the Tapanuli orangutan (Pongo tapanuliensis) and lives in South Tapanuli on the island of Sumatra, Indonesia.

Let’s meet the family. Our family goes by the name of Hominidae, also known as the Great Apes (with capitals or without, as you like). Yes, you are an ape and you are great! Our family has seven, and now eight living (not extinct) species.


By the way, the word orangutan comes from the Indonesian language and means person from the forest.

Says Nater (Nater et al. 2017):
“P. tapanuliensis comprises the oldest evolutionary lineage in the genus Pongo. With fewer than 800 individuals, P. tapanuliensis is among the most endangered great apes”
“an isolated population from Batang Toru, at the southernmost range limit of extant Sumatran orangutans south of Lake Toba, is distinct from other northern Sumatran and Bornean populations.”
“the deepest split in the evolutionary history of extant orangutans occurred ~3.38 mya between the Batang Toru population and those to the north of Lake Toba, whereas both currently recognized species separated much later, about 674 kya.”
“The external morphology of P. tapanuliensis is more similar to that of P. abelii in its linear body build and more cinnamon pelage than that of P. pygmaeus. The hair texture of P. tapanuliensis is frizzier, contrasting in particular with the long, loose body hair of P. abelii. Pongo tapanuliensis has a prominent moustache and flat flanges covered in downy hair in dominant males, whereas flanges of older males resemble more those of Bornean males. Females of P. tapanuliensis have beards, unlike those of P. pygmaeus.”
“The total distribution covers approximately 1,000 km2, with an estimated population size of fewer than 800 individuals. The current distribution of P. tapanuliensis is almost completely restricted to medium elevation hill and submontane forest (~300–1300 m above sea level)”
“Due to the rugged terrain, external threats have been primarily limited to road construction, illegal clearing of forests, hunting, killings during crop conflict, and trade in orangutans. A hydroelectric development has been proposed recently in the area of highest orangutan density, which could impact up to 8% of P. tapanuliensis’s habitat. This project might lead to further genetic impoverishment and inbreeding, as it would jeopardize chances of maintaining habitat corridors between the western and eastern range” 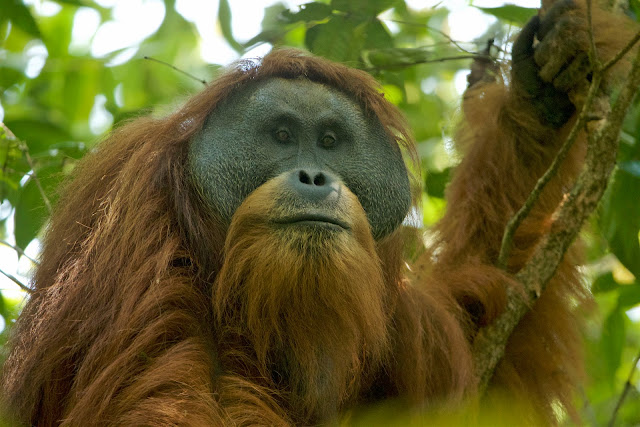 Says IUCN (International Union for Conservation of Nature) (Reese 2017): “this is the first new great ape species since 1929” 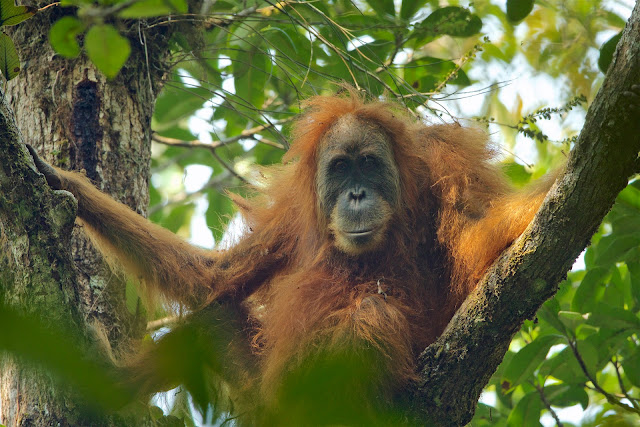 Says Nature (Reese 2017):
“All orangutans trace their origins to ancestors that lived on the Asian mainland about 8 million years ago. Those great apes migrated to what is now Sumatra, when sea levels were lower and the lands were connected. Genetic data suggest the Batang Toru species is the closest descendant of those first arrivals.”
“Although much of its habitat is protected by the Indonesian government, a proposed hydroelectric dam on the Batang Toru river would flood part of the area and divide the population into two, isolating the groups on either side of the river. That’s likely to further shrink the gene pool in the already inbred population”

Says Science (Stokstad 2017):
“In 1997, Erik Meijaard, a co-author of the paper and a biologist with Borneo Futures, a conservation group based in Bandar Seri Begawan, led a team that followed up on a 1935 report by a colonial-era zoologist. It mentioned orangutans in the Batang Toru forest, which by the 1990s was believed to be outside the orangutans’ range”
“in 2013, villagers killed an adult male orangutan after it invaded a garden”
“sound recordings analyzed by SOCP’s Matthew Nowak revealed calls with more pulses and higher pitches.”
“Although orangutans in north and south Sumatra occasionally interbred after the lineages diverged, the Tapanuli orangutans became completely isolated by about 20,000 years ago”
“In 2014, the government protected most of the forest from logging. But the best habitat—about 7 square kilometers of lowland forest—is not protected, and villagers sometimes kill orangutans that raid gardens. Gold mining is also driving deforestation. A planned hydropower dam is the latest threat. The so-called run-of-river design would not store much water behind a dam, but would require digging a long tunnel in an area that holds the densest population of orangutans. An access road would promote deforestation”