August 14, 2017
Not much is known about the very first "German Vegan Society" which was founded during a vegetarian congress in Bad Liebenzell (a small town west of Stuttgart, in South West Germany) in 1953. The director of this German Vegan Society was called Karl Salat. The organization was based in Stuttgart.
This organization might only have existed during that year of 1953.

The UK Vegan Society's magazine The Vegan reported this in their Summer 1953 issue (page 24):

"Deutsche Vegan-Gesellschaft
The General Secretary of the I.V.U. has recently informed us that in the March copy of the Vegetarisches Universum, the formation of a Vegan Society in Germany is announced:
Deutsche Vegan-GeSellschaft,
Herr Karl Salat,
Stuttgart-Botnang,
Feuerbacher Strasse, 1.
To the new Society our most sincere good wishes. We have already sent copies of our literature ; and hope to maintain with the Deutsche Vegan-Gesellschaft a continual interchange of news, views and experiences."

[Translation:]
"STUTTGART. During the 'Congress of Ideals' [Kongreß der Ideale] held in Bad Liebenzell in 1953 the German Vegan Society [Deutsche Vegan-Gesellschaft], based in Stuttgart, was founded. The engineer Karl Salat became the director. (vupa)" 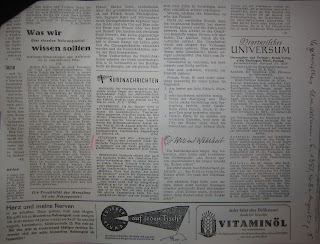