Vitamin B12 deficiency in vegetarians in Pakistan 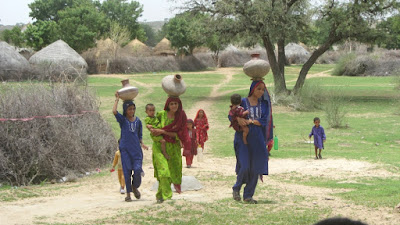 Participants:
apparently healthy volunteers: 100 vegetarians + 100 non-vegetarians (ominvores), aged 20–40 years
“The present study has been carried out in Mithi, District Tharparker (Sindh), because a large number of the population in Mithi District belong to the Hindu community and most of the people of this community adhere to a vegetarian diet because of family conventions or religious reasons.”
“The vegetarian group had adhered to a vegetarian diet since their childhood. Except for the small consumption of dairy products, they ate no animal sourced food such as meat, poultry, fish, or eggs. The omnivore group ate all types of food, including vegetables and animal foods such as meat, poultry, fish, and eggs.”
“We excluded the subjects from this study if they were taking multivitamins, […].”

“Conclusion: Vegetarians [who do not add sufficient amounts of vitamin B12 to their diets by consuming supplements or fortified foods] have Vitamin B12 deficiency and are more prone to developing neuropsychiatric and neurological problems.”

“Therefore, it is recommended that people should eat a diet fortified with Vitamin B12 and folic acid to prevent these nutrient deficiencies, particularly in vegetarians. Early detection of Vitamin B12 deficiency is necessary for preventing potentially irreversible neuropsychiatric changes. So it is recommended that, in vegetarians with neuropsychiatric problems, their Vitamin B12 levels should be checked and treated if it is deficient to prevent irreversible neurological loss.”

“[…] early replacement of Vitamin B12 is suggested for preventing such catastrophic damages [irreversible nerve damage and/or psychological problems] in this high-risk group [vegetarians].”