10 things I saw in Madrid

October 14, 2016
1) The Mayas of what is now Guatemala and southern Mexico (~600-900 AD) used to drink "foamy and bitter" cocoa-with-water beverages from good looking cups like this one. (Museo de América)

2) Some people in Brazil (from the Yanomami people) are said to drink the ashes of their dead... (Museo de América) 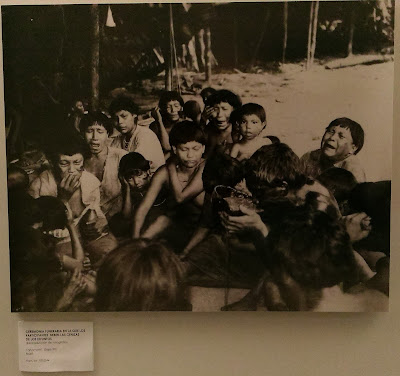 3) This picture is reminiscent of the Hindu/Hare Krishna "man-with-cow-head chops cow-with-man's-head's head off" pictures popular in 1990's Krishna hardcore zines like Porcell's War on Illusion. 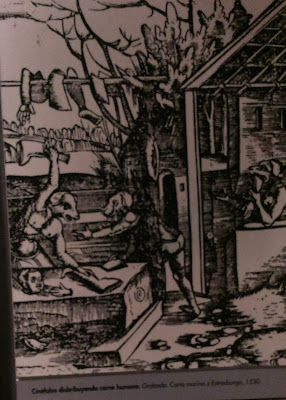 4) A description of a "drinking container" (not shown) made ~1100-1400 AD by people of the Chimú culture of what is now Peru, in the Museo de América, says that the "indigenous diet" then was centred around three basic staples: legumes/beans, pumpkin, and corn. 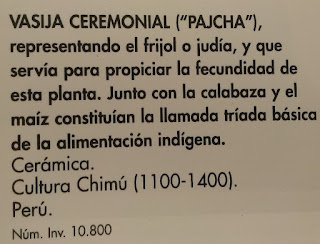 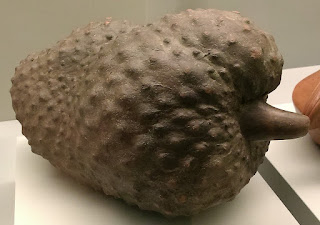 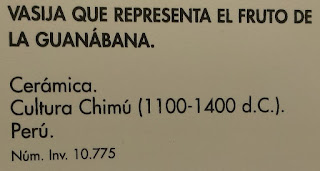 6) In Madrid there is a Venezuelan-ish Indian from India inspired vegan restaurant called Cookaluzka - cook like cook, luz like light, and ka like casa - and these two dishes were the absolute BOMB = very good. 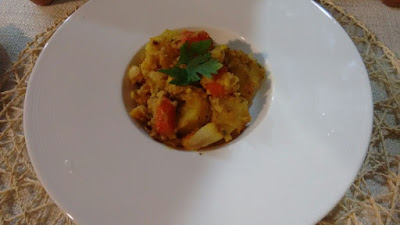 The croquettes (croquetas) off of the normal menu.
Really amazing, especially the sauce. 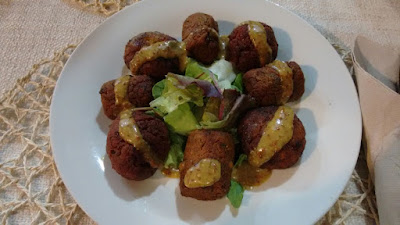 7) El Perro Gamberro - the rowdy dog - on Calle Segovia is opening its door today, unfortunately too late for me.
https://www.facebook.com/elperrogamberro.es/ 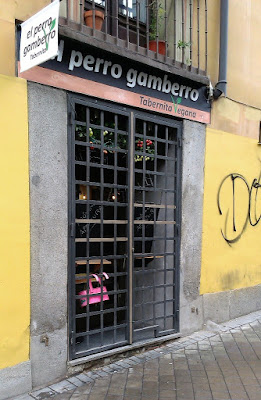 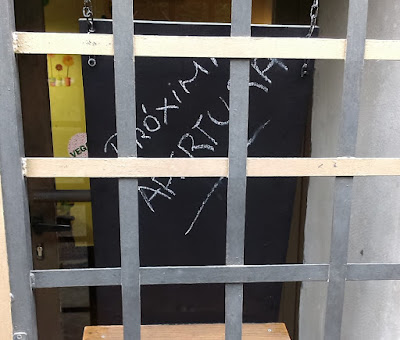 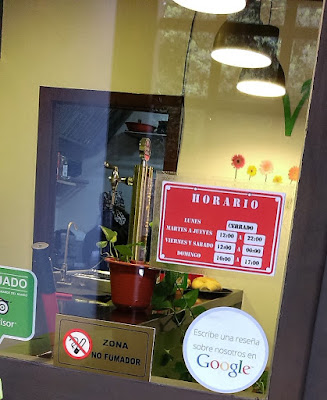 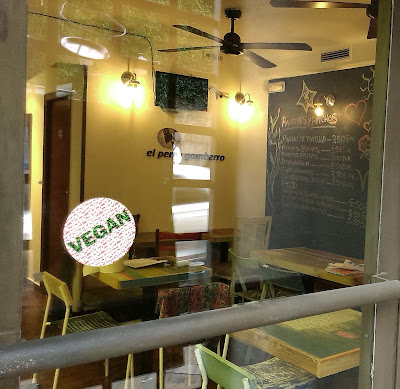 8) Accidentally I stumbled upon Michael Greger MD's new vegan book "How not to die" - which I haven't read and therefore cannot say anything about - in the Spanish version, in the Corte Inglés next to Callao metro station.
Comer para no morir. It costs around 35 Euros. 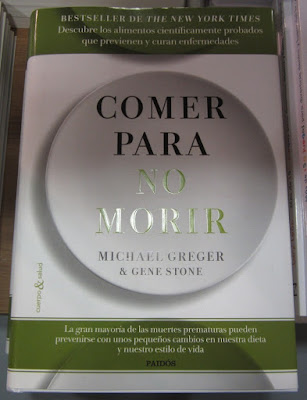 9) In the Vans Store next to Gran Vía metro station I had a look at - and did not buy but did approve of - the newish vegan Vans named "Vans AV Rapidweld Pro Lite". They must be called exactly that, "pro lite", or they're NOT vegan. More info: http://veganskateblog.com/shoes/vans-av-rapidweld-pro-lite
Price in Europe: ~100 Euros, many different colorways

10) Very interesting, for vegan nutrition aficionados: I bought a baguette in the local Madrilenian supermarket chain HIBER, and one of the ingredients is "calcium carbonate", which is also frequently used to fortify soya milk, and which has good bioavailability (like cow's milk). The question is: How much calcium is added to this bread? I don't know, but it's probably a relevant amount, given that the daily recommendation for calcium is only 1 gram.
The calcium is not added - in this case - to fortify the product, but as an "anti-aglomerante" to keep the berad more fluffy. 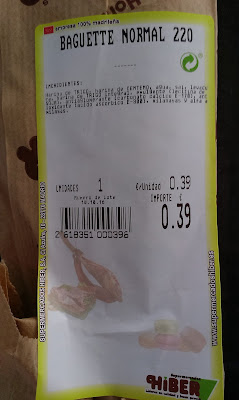 More:
My to-do-list for Madrid contained two bullet points (apart from the vegan nutrition presentation I did there):
- B13 bar
- Vegan Rock bar
I didn't make it to either. 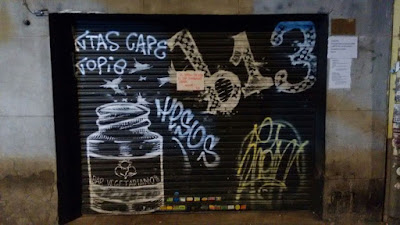 Vegan Rock bar - which I recommend without ever having been there or knowing the least bit about it - wasn't open either when I had time, as I think (!) they are closed Mondays, Tuesdays, Wednesdays - plus Thursdays daytime.
https://www.facebook.com/veganrockmadrid/


If you want to eat a lot go to Shi Shang, which is vegetarian. No good vegan deserts, but the normal buffet (excluding the deserts) is all vegan.
An unfortunate use of a horse drawn carriage drawing: 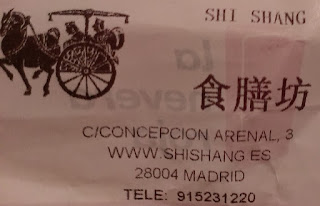 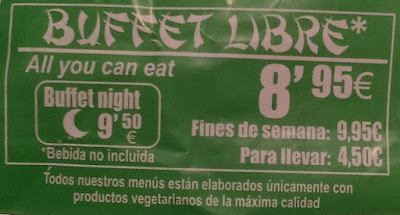 At "Tu Fruta" - which is somewhere in the centre ... - You can buy cheap and amazing "batidos" = shakes, for example avocado and soya milk for 1,50 Euro. 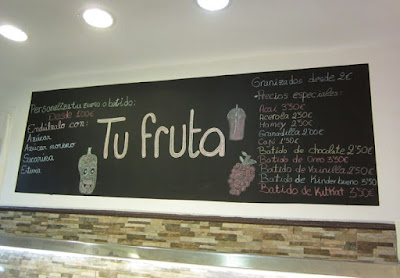 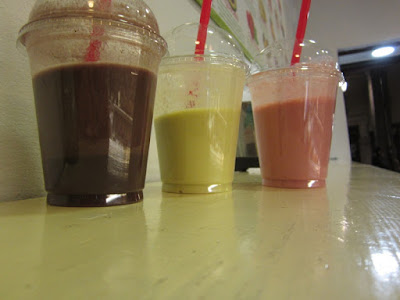 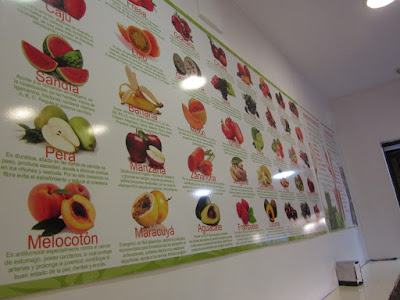 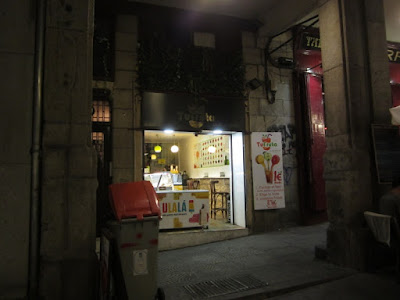 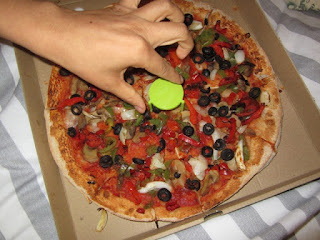 Check out madridvegano.es for more info - there are a lot of new vegan places and vegan options in Madrid.