What the vegan movement can learn from Richard Dawkins

April 14, 2014
Many ideas floating around in the vegan movement are based on faith, rather than critical evaluation and “well demonstrated reasons” – not religious faith, but faith in things we convince ourselves are true, because we want them to be true.

Watch Dawkins’ “The root of all evil?” to hear his criticism of religion. Quotes by Dawkins below. 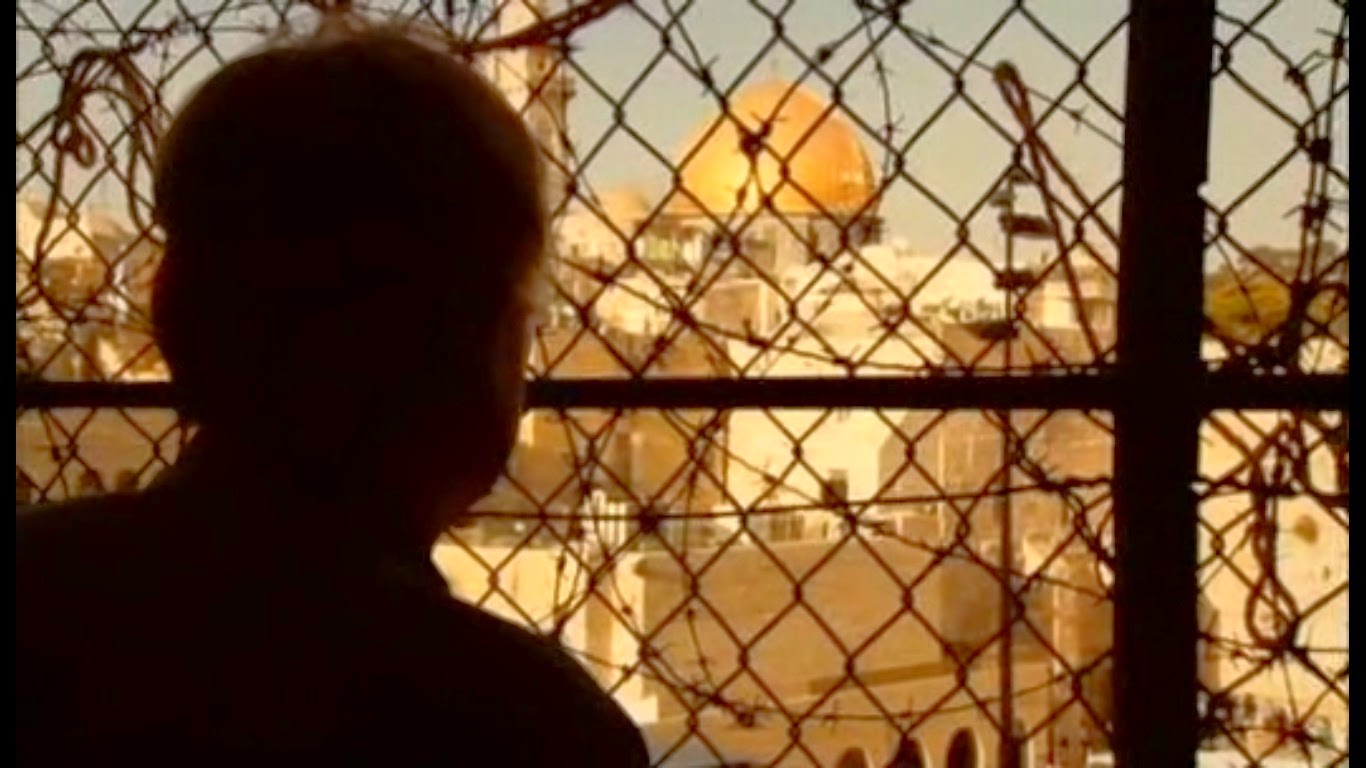 “There are would-be murderers all around the world who want to kill you and me, and themselves, because they are motivated by what they think is the highest ideal.”

“Don’t let’s forget the elephant in the room: an elephant called religion.”

“This isn’t just a problem of Islam, […] that dangerous thing that is common to Judaism and Christianity as well, the process of non-thinking called faith.”

“I believe there is a profound contradiction between science and religious belief. There is no well demonstrated reason to believe in god.”

“The 21st century should be an age of reason. Yet irrational militant faith is back on the march.”

“The time has come for people of reason to say: Enough is enough. Religious faith discourages independent thought, it’s divisive, and it’s dangerous.”

“If you have the delusion that you are Napoleon, it must be a fairly lonely feeling, because nobody else agrees with you. Your faith that you’re Napoleon needs a lot of suring up. But these people here [Catholic pilgrims in Lourdes], thousands of people, all have exactly the same delusion. That must give wonderful reinforcement to their faith.”  “This is a benign herd. But it supports a backward belief system that I believe reason must challenge.”

“It may seem tough to question these poor, desperate people’s faith. But isn’t embracing truth better than false hope?” [Actually in terms of religion, I’m not sure what the answer to this question is.]

“[…] I want to look at how the suspension of disbelief inherent in faith can lead to far more dangerous ideas beyond.”

“People like to say that faith and science can live together side by side. But I don’t think they can. They’re deeply opposed. Science is a discipline of investigation and constructive doubt questing with logic, evidence and reason to draw conclusions. Faith by stark contrast demands a positive suspension of critical faculties.
Science proceeds by setting up hypotheses, ideas or models, and then attempts to disprove them. So a scientist is constantly asking questions, being skeptical. Religion is about turning untested belief into unshakable truth through the power of institutions and the passage of time.”

“There was an elderly professor in my department who had been passionately keen on a particular theory for, oh, a number of years. And one day an American visiting researcher came and he completely and utterly disproved our old man’s hypothesis. The old man strode to the front, shook his hand and said: ‘My dear fellow, I wish to thank you. I have been wrong these fifteen years.’
And we all clapped our hands raw. That was the scientific ideal, of someone who had a lot invested, a lifetime almost invested into theory. And he was rejoicing that he had been shown wrong, and that scientific truth had been advanced.”

“If you believe the surveys 45% of Americans [US citizens], that’s about 135 million people, believe the universe is less than 10,000 years old.”

“To understand the likes of Osama bin Laden you have to realize that the religious terrorism they inspire is the logical outcome of deeply held faith. Even so-called moderate believers are part of the same religious fabric. They encourage unreason as a positive virtue.”

“What’s really scary is that religious warriors think of what they are doing as the ultimate good.”

“I don’t see what future the world has, as long as people think like that, and people are going to go on thinking like that, as long as they’re brought up from childhood, from the cradle, to think that there’s something good about faith, to think that there’s something good about believing because you’ve been told to believe rather than believing because you’ve looked at the evidence.” 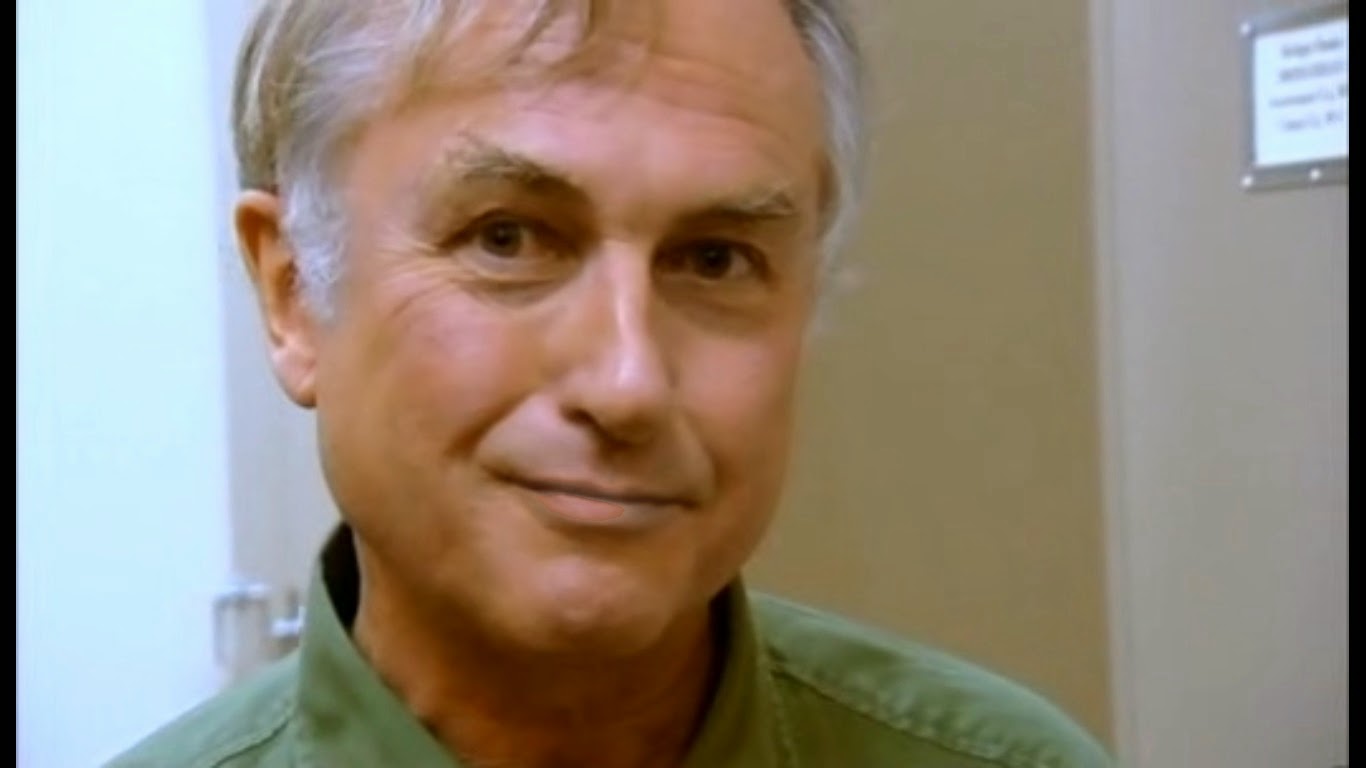 “Unlike religion, science doesn’t pretend to know everything.”

“We are all atheists about most of the gods that societies have ever believed in. Some of us just go one god further.”

Richard Dawkins, The God delusion, The root of all evil? Part 2 – The Virus of Faith, Channel 4, IWC Media Limited, 2006 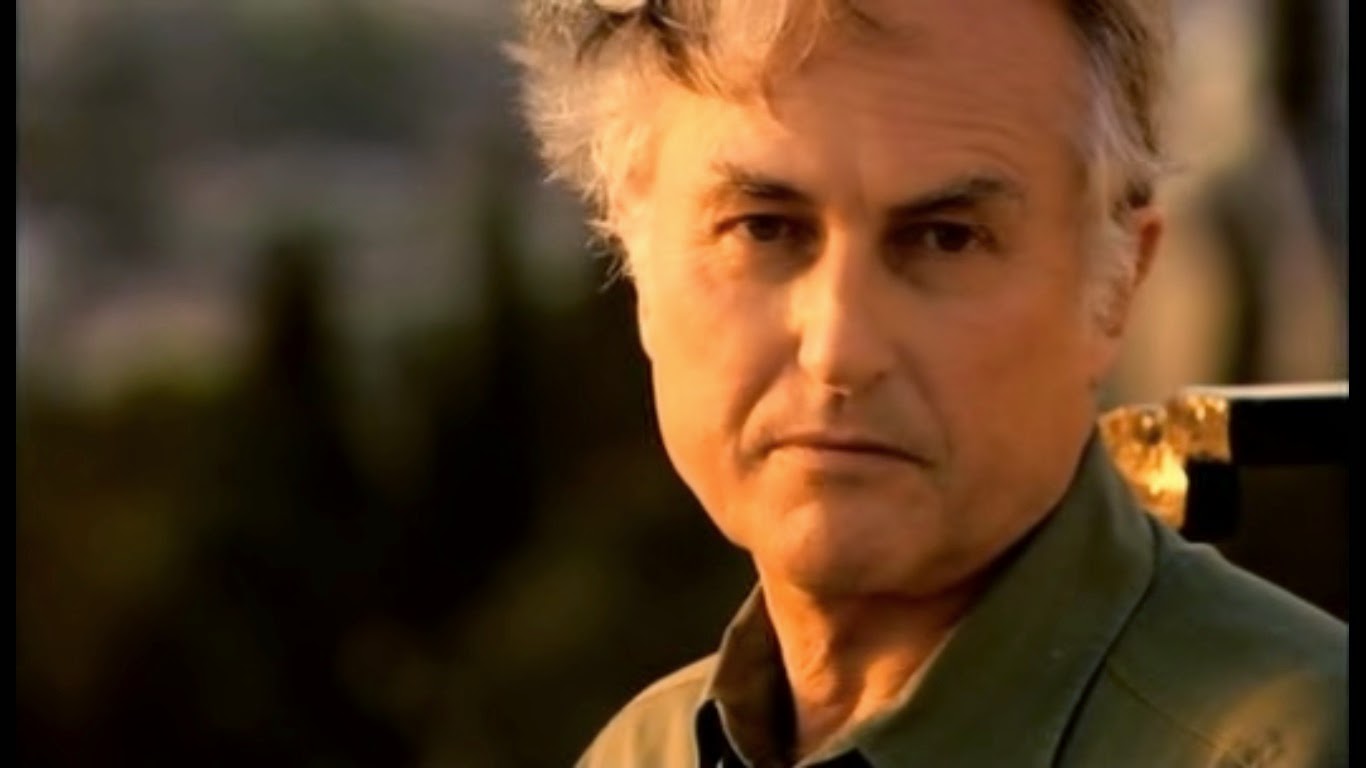 “The god of the Old Testament has got to be the most unpleasant character in all fiction: jealous and proud of it, petty, vindictive, unjust, unforgiving, racist, an ethnic cleanser urging his people on to acts of genocide.”

Dawkins himself doesn’t seem to be looking at the evidence here. If there is any such thing as “good and bad people” is questionable. A monstrous example of atheists doing “evil things” is the Communist Party of China, one of the most criminal, murderous and “evil” regimes at present and probably in the history of humanity.

Richard Dawkins, Queerer than we can suppose: the strangeness of science, TED, Oxford, England, July 2005 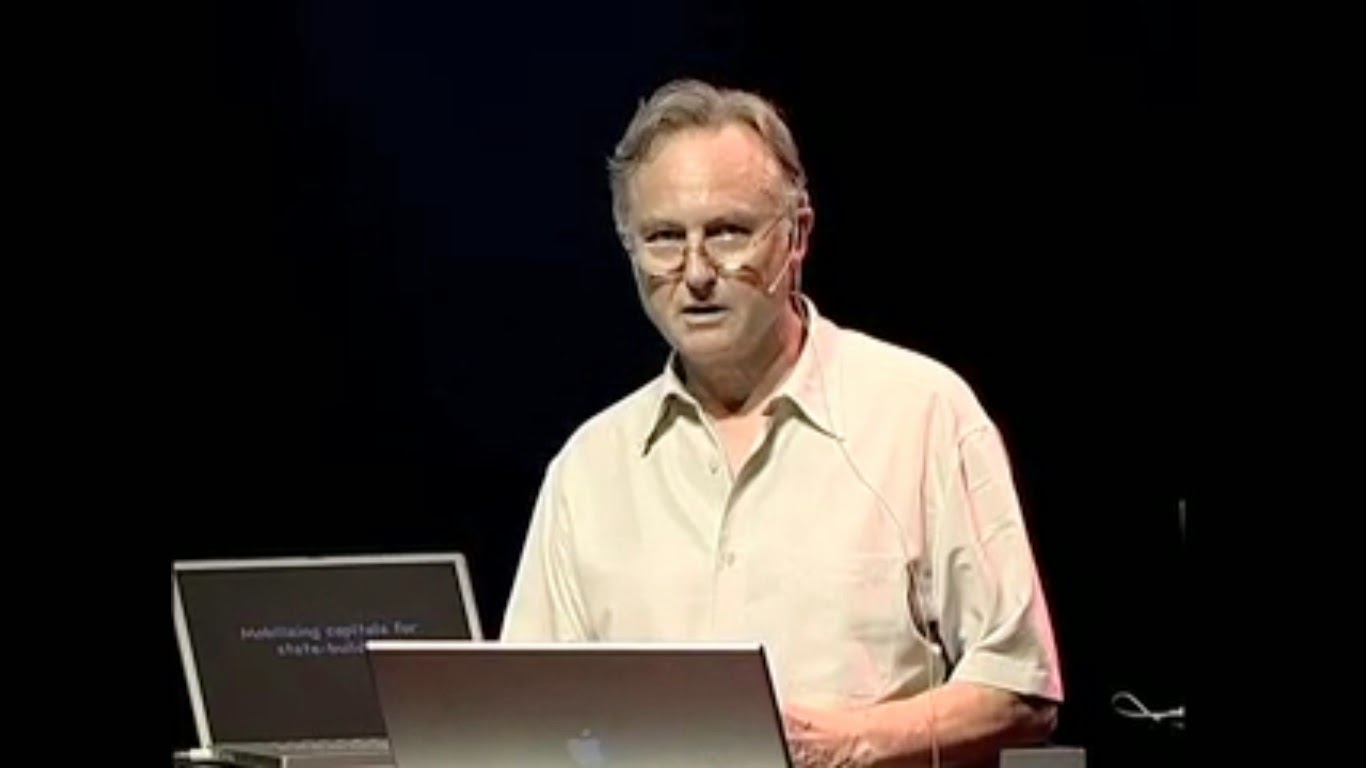 “The biologist Lewis Wolpert believes that the queerness of modern physics is just an extreme example. Science as opposed to technology does violence to common sense. Every time you drink a glass of water, he points out, the odds are that you will imbibe at least one molecule that passed through the bladder of Oliver Cromwell.”

“The history of science has been one long series of violent brainstorms, as successive generations have come to terms with increasing levels of queerness in the universe. We’re now so used to the idea that the earth spins, rather than the sun moves across the sky, it’s hard for us to realize what a shattering mental revolution that must have been. After all it seems obvious that the earth is large and motionless, the sun small and mobile. But it’s worth recalling Wittgenstein’s remark on the subject:
‘Tell me’, he asked a friend. ‘Why do people always say it was natural for man to assume that the sun went round the earth rather than that the earth was rotating?’ And his friend replied: ‘Well obviously, because it just looks as though the sun is going round the earth.’ And Wittgenstein replied: ‘Well, what would it have looked like, if it had looked as though the earth was rotating?’”

RE: Steve Grand in his book “Creation: Life and how to make it”
“Steve Grand points out that you and I are ourselves more like a wave than a permanent thing. He invites us, the reader, to think of an experience from your childhood, something you remember clearly, something you can see, feel, maybe even smell, as if you were really there. After all, you really were there at the time, weren’t you? How else would you remember it? But here is the bombshell: You weren’t there. Not a single atom that is in your body today was there when that event took place.
Matter flows from place to place and momentarily comes together to be you. Whatever you are therefore, you are not the stuff of which you are made.”
[As far as I know, and I might be wrong, there are some proteins in our bodies (our eyes) that are as old as we are, i.e. they are never replaced during our lifetimes. But whether this means the atoms that make up these proteins aren’t replaced, I’m not sure.] 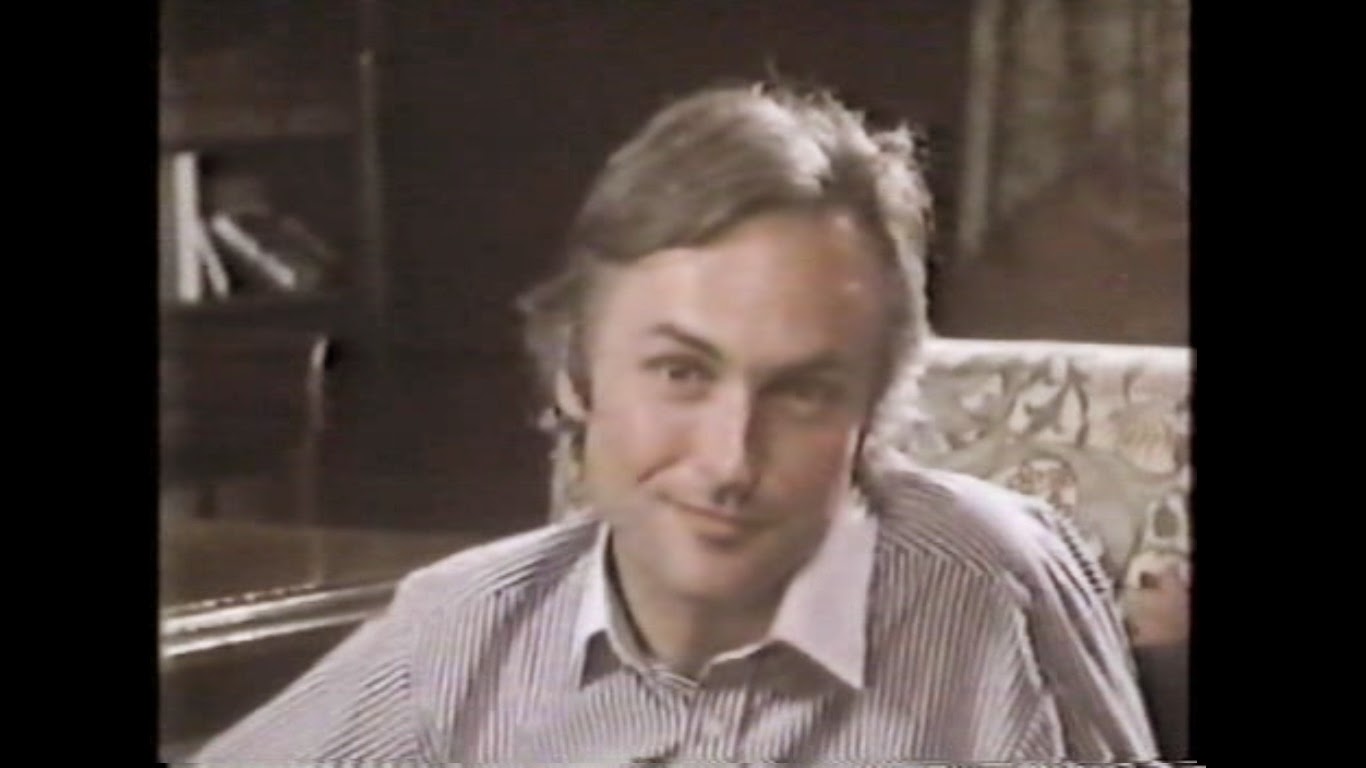 Here Dawkins explains the so-called “Prisoners’ dilemma” and “the tragedy of the commons” and talks about bearing grudges from an evolutionary perspective and cooperation as the most successful long-term strategy.