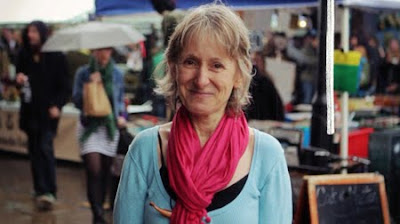 Sandra Hood is a dietitian and author of “Feeding your vegan infant – with confidence” published by The Vegan Society. She also worked with Plamil Foods to produce “Vegan Infants Case Histories” to prove the efficacy and benefits of a vegan diet for infants.

1) How long have you been vegan and why did you become vegan?
I have been vegan for over 30 years now. I became vegan overnight (I was a meat eater) after reading a Vegan Society leaflet about the suffering of the dairy cow. I just didn’t appreciate the link between cruelty and dairy products. I believe that a cow endures much more suffering than beef cattle as she is continually having to suffer her calf being taken from her in order for humans to drink her milk.

2) Are there any precautions a vegan woman should take if she is planning to conceive? Should she have certain levels of nutrients tested in advance?
Any woman planning a pregnancy should give it careful thought whether vegan, vegetarian or omnivore. There is no need to have special tests in advance. A vegan diet will supply all the basic nutrients needed for planning a baby with the possible exception of vitamin B12 which may be needed in supplement form if the diet does not contain adequate fortified foods. The only other supplement recommended for all women is vitamin D and folic acid.

3) What are the risks for mother and baby, when a vegan mother becomes pregnant while being B12 deficient?
The importance of getting sufficient vitamin B12 cannot be overemphasized. B12 deficiency during pregnancy may increase the risk of neural tube defects and if the baby is born with inadequate stores it can lead to failure to thrive, delayed development and brain damage which may be irreversible.

4) What is the function of folic acid during pregnancy and what are good vegan sources?
Folic acid is essential for a baby’s development and inadequate intake can lead to neural tube defects. The use of folic acid supplements is routine recommendation for all women wishing to conceive and at least until the 12th week of pregnancy. Vegan diets are rich in this vitamin and good sources include green leafy vegetables, wholegrain cereals, dates, nuts, oranges, avocado and yeast extract. Nevertheless, it is still sensible to take a folic acid supplement.

5) How long should vegan babies be breast-fed and when should other foods such as plant milk be introduced?
All babies whether vegan or non vegan should be breast fed for as long as mother and child wish. Breast milk provides all babies’ needs up to 6 months of age. Solids should not be introduced before 4 months due to the possible risk of allergy due to the baby’s immature digestive system which may not be able to cope with food too early. Plant milks can be introduced into a vegan infant’s diet at weaning but not as a sole feed.

6) When raising a vegan child, what nutrients deserve special attention and what foods, fortified foods, or supplements are the best sources?
Again, a vegan diet can provide all the nutrients for growth and development with the possible exception of vitamin B12 which would need to be provided by a supplement if the diet is not fortified with this nutrient. All infants, whether vegan or non-vegan, should be provided with vitamin drops up to the age of 5 years. Key nutrients for vegan children are protein which can easily be met if a child has a varied diet. Good protein sources include pulses, grains, nuts and seeds. Calcium is also important for growing bones and teeth and vegan sources include fortified non-dairy milks, calcium set tofu, baked beans, dark green leafy vegetables low in oxalic acid such as spring greens and kale. Calcium supplements may be needed if the diet is inadequate. Iron deficiency anaemia is the most common childhood nutritional problem and is no more likely to occur in vegan than in non-vegan children. Good sources of iron include whole or enriched grains, iron fortified cereals, legumes, green leafy vegetables and dried fruits.

7) If a mother cannot breast-feed her child, what would be the second best option? Unfortunately there is no longer a vegan infant formula. The Vegan Society and other vegan organisations are encouraging companies to consider producing a vegan infant formula but in the meantime, on the very rare occasion when a mother cannot breast feed, she would have to consider a soya formula which contains vitamin D from an animal source.

8) Vegan mothers are often advised by friends, family and even doctors that children must drink cow's milk, eat fish weekly or eat certain animal products regularly in order to thrive. Sometimes mothers are told that children who were raised completely vegetarian or vegan often develop certain deficiencies or might even suffer permanent physical damage. What are your thoughts on these and other similar claims?
This never ceases to amaze me. Why do omnivorous parents think their diet is superior? It is usually to the contrary! Several studies have examined the nutrient intakes of vegan children and the health benefits are well documented with vegan children having higher intakes of fruits and vegetables, lower intakes of fat, saturated fat and cholesterol than their omnivore peers. This may be important in reducing the risk of developing chronic diseases such as heart disease and obesity. Also vegan diets may introduce children to a greater variety of whole plant foods and so help children establish healthy lifelong eating habits. Isn’t this in contrast to the omnivorous children who indulge in burgers, sweets and other fast foods? I believe vegan children are healthier than their omnivore peers

9) Do you recommend that vegan mothers and children take a DHA supplement?
There has been a lot of interest in this long chain fatty acid and I do not believe a supplement is necessary. DHA is a non-essential fatty acid because it is produced in the body from alpha-linolenic acid (ALA). Sources of ALA include berries, leafy vegetables, flaxseed, rapeseed, hempseed and walnuts. It is important that the vegan diet is varied and well balanced to ensure adequate conversion to this fatty acid. Therefore it is recommended that flaxseed (linseed) or canola (rapeseed) oil is added to a child’s diet from about the age of one year. This is about half a teaspoon of flaxseed oil or a teaspoon of flaxseed powder or a teaspoon of canola oil per day.

10) Do you have any other advice for vegan mothers or would you like to add anything else?
I have no doubt that many of the chronic diseases of adulthood manifest themselves in childhood and I believe bringing up a child on a well planned, balanced vegan diet can provide them with the best start in life. I would encourage any parent to be prepared, read up on vegan nutrition so that you feel confident when faced with well meaning, but often ill-informed family, friends and health professional. I believe the vegan diet is the diet of the 21st century and can give children a better start in life and help to establish lifelong healthy eating patterns and beliefs.