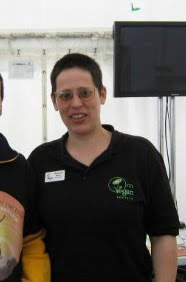 Amanda Baker is Media and Web officer and in charge of PR at the Vegan Society, UK.

I would like to say hello to all Fuente Vegana readers, thank you very much for this chance to 'speak' to you, and thank you for your interest in plant-based living.

1) Since when have you been vegan and why did you go vegan?

I decided to choose a vegan lifestyle several years ago now. I always thought of myself as an 'animal lover', but I was raised in a meat-eating family and culture. I lived on my grandparents’ smallholding until I was 8, which means that I have always known that meat is a name for parts of dead animals. But it took me many years to realise that I could choose not to eat meat, and I could have a healthy and fulfilling life without taking things from animals. It was actually the huge environmental impact of animal farming which finally gave me the kick I needed to commit to a vegan life.

The Vegan Society is a registered UK charity and also a membership supported organisation. We have around 4000 members, in the UK and around the world. We offer free information to anyone about the benefits of plant-based living for people, animals and the planet. We do have some particular projects too. Our Vegan Catering for All project focuses on professional caterers, to help them put good vegan meals on to their menus. Our Global Food Security project is reaching out to farmers and growers, to politicians and decision-makers, and to international development workers, to help them understand the damaging links between animal farming, hunger and global climate change. Our Vegan Pledge offers personal coaching to people who are curious to try eating a vegan diet for a week or more with the help of an 'email mentor'. Our numbers grow mostly thanks to our members, who support our work, and tell others about it.

3) Many vegans outside of the UK (and North America) think of England as a kind of vegan fairytale land with big vegan festivals, many vegan products and restaurants, and many vegan owned all-vegan companies. I think this is because veganism comes from England and has been around there for longer than in many other places. Do you think the UK is more vegan-friendly than other countries? And could you tell us if there are any statistics on how many vegans there are in England and the UK?

We believe that there are at least 150,000 vegans in the UK. It may be true that the UK is at the forefront now. There are indeed dozens of vegan restaurants in the UK, and many more vegan-friendly restaurants - many in London and other English cities, but also in the other parts of the UK: Scotland (particularly Glasgow), Wales and Northern Ireland. But I hope that the UK, and all other countries, can co-operate to each become increasingly vegan-friendly!

4) More and more vegans are now aware of the need to get vitamin B12 from supplements or fortified foods. Is the B12 added to fortified foods always vegan? And apart from vitamin D3 (made from fish or wool), are there any other vitamins to watch out for that might not be vegan, e.g. when we buy a supplement or a box of fortified cornflakes?

To enjoy the benefits of a well-planned vegan diet, vegans should do one of the following:

All vitamin B12 is made by micro-organisms, and to the best of our knowledge, the vast majority of vitamin B12 used to fortify foods is suitable for vegans. But if you have any doubts, it is always worthwhile contacting companies directly and finding out the details of their manufacturing processes. Companies are often happier to speak to customers than to The Vegan Society, so please do let us know to info[at]vegansociety.com if you find out about any vitamin B12 fortification which is not suitable for vegans. The same is true for other vitamins (apart from Vitamin D3, as you rightly say).

5) Can you think of any mistakes made by the vegan movement in the UK (or anywhere) in the past, mistakes that others could avoid making?

Even in the UK, vegans have to face negative stereotypes - that we are unhealthy, or aggressive, or that we spend all our time arguing amongst ourselves. We try hard to provide the best advice on healthy vegan lifestyles, summarised in our Plant-Based Nutrition booklet, and we urge all vegans to study, share and follow this advice to show off the best of vegan lifestyles. As for aggression, of course we all feel very passionately about cruelty to animals. But I believe that, if we are to persuade and convince people to change their lives and adopt veganism, we need to cultivate patience and compassion for those people. Most vegans were meat-eaters for many years - that should help us to have empathy for all the people who are still on their journey toward becoming vegan.

6) Could you tell us about VEG 1? Are many people buying it? I know it's available in Germany and Austria as well. Is it available in any other countries and is it possible for other people to import it to their own countries?
VEG 1 is a supplement suitable for vegans of all ages, designed as an 'insurance policy' for vegans who feel they need a little extra help in achieving a fully balanced diet. As far as we know, it is possible for anyone with web access to order VEG 1 through our website. We welcome enquiries from anyone interested in selling VEG 1 in any country, but we would just supply the VEG 1 and could not check the legal requirements of that country - you must do that.

7) The Vegan Society has a "why vegan" film called Truth or Dairy, from 1994. Do you know if it is available with subtitles in other languages? And are there any plans by the Vegan Society to make other films?
We are not aware of any subtitled versions of Truth or Dairy, and we do not currently have a transcript available. However, we are open to making a new film. [There is a new film now called Making The Connection]

8) Do you have any tips or ideas for promoting veganism in the 21st century?
Listen to non-vegans, to learn how to communicate with them. Seek common ground, as a place from which to start working. Remember that plant-based lifestyles can answer very many modern concerns. Learn about the evidence for the benefits of vegan lifestyles, so you can share it confidently but compassionately.
For example: A well-planned plant-based diet can help us to follow healthy eating advice, for example on fats, fruits and vegetables. In the UK, we can feed ourselves using just one third the fresh water, fertile land and energy on a well-planned vegan diet compared to the typical UK diet. The United Nations have shown that the food energy wasted by feeding grain to farmed animals could meet the needs of 3.5 billion more people - and human population is likely to reach 9 billion by 2050. The animal farming industry worldwide is in the top three causes of all human-caused greenhouse gas emissions - and climate change is already causing hunger.
If all else fails, keep your sense of humour! - And learn to bake fabulous vegan chocolate cake to share with non-vegans!

10) Often people want to include other ideas into the definition of veganism, e.g. "veganism means pacifism" or "veganism should also mean eating healthfully". People from all different kinds of backgrounds are vegans, and the definition of veganism is already there. What is your opinion? And could you give us the "official" Vegan Society definition of veganism.
It is helpful to agree upon one basic definition of vegan lifestyles. We offer: "Vegan lifestyles are ways of living that seek to exclude - as far as is possible and practical - all forms of exploitation of animals for food, clothing or any other purpose". It also helps to remember that the purpose of being vegan is to help the animals. You do not have to be a perfect person to be vegan!
Please get in touch - info[at]@vegansociety.com - with any questions, comments, information or other responses! 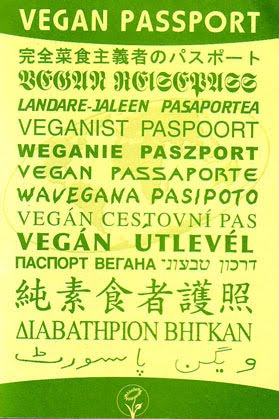